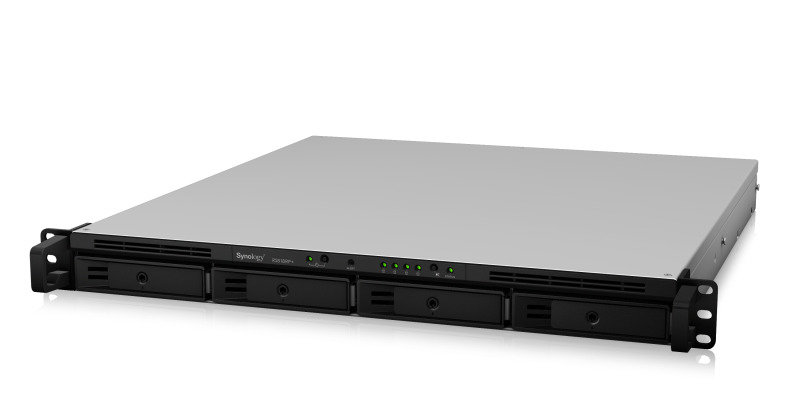 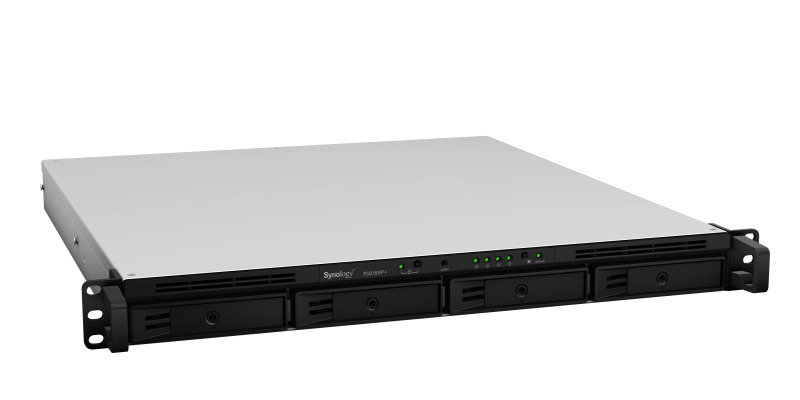 The RackStation RS818RP+ 4-Bay NAS Server from Synology is a reliable, high performance 1 RU network attached storage solution for SMB environments seeking strong performance and scalable storage for sharing files across different platforms, centralizing data backups, and protecting critical assets. This unit has four drive bays, each of which natively supports 3.5" SATA hard drives, as well as and 2.5" SATA hard drives and SSDs with sequential read speeds of over 1099 MB/s. Should users need to expand the overall capacity of their RS818RP+, the optional RX418 expansion unit offers an additional four drive bays that are identical to those offered by the RS818RP+. Additionally, should power to the NAS be interrupted, the RS818RP+ comes equipped with a 150W redundant power supply.

The RackStation RS818RP+ is powered by a 2.4 GHz Intel Atom C2538 Quad-Core processor, which will allow you to run multiple functions simultaneously. The built-in 2GB of DDR3 RAM will allow quick access to frequently-used files and programs and may also be upgraded to a total of 16GB by installing an 8GB module into the available memory slot. Also featured are two USB 3.0 Type-A ports and one eSATA port, which allow it to be connected to your Windows or Mac system, or the RX418 expansion unit. Network connectivity is achieved via the four Gigabit Ethernet ports with failover support, which helps to provide redundancy in the case that a LAN connection malfunction occurs on one port. In addition, link aggregation, powered by four LAN ports, helps to increase connection speeds beyond the limits of a single network port or cable.

The RackStation RS818RP+ runs on the DiskStation Manager (DSM) operating system, which helps simplify managing your NAS, as well as accessing and sharing data. A variety of RAID modes are supported, which help provide users with data redundancy, speed, or a combination of both. Supported RAID modes include RAID 0, 1, 5, 6, 10, Basic, and Synology Hybrid RAID. For those who do not require a RAID, JBOD is also available, allowing each drive bay to be individually utilized.