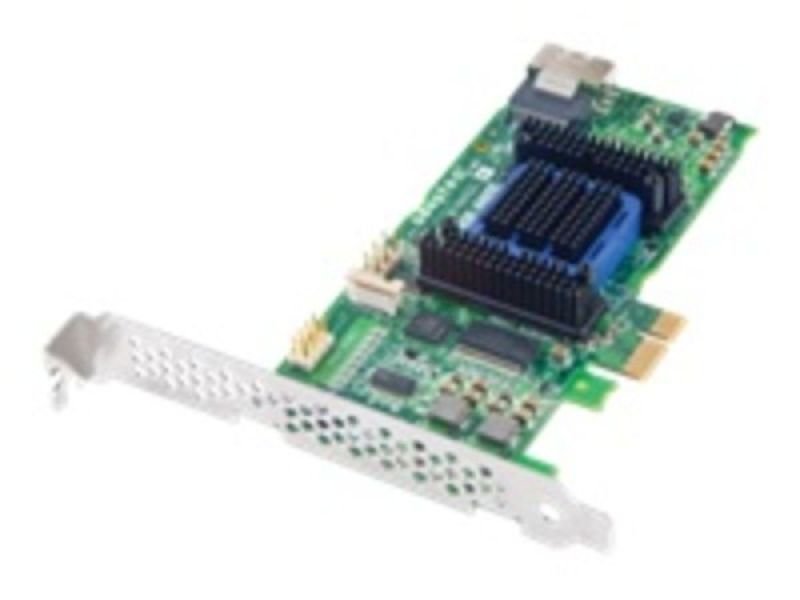 Adaptec Series 6E SAS/SATA RAID adapters deliver the robustness of hardware RAID and the Adaptec RAID Code, enterprise class management features, and full OS support, including open source drivers – into the entry-level RAID space. The Series 6E are optimized for platforms where a Series 6 adapter would not fit in from a price, form factor or host connectivity standpoint.

Series 6E adapters support SAS and SATA devices, and have been qualified with the same systems, motherboards, backplanes and drives as Series 6 adapters. They include the same drivers, BIOS and storage management tools as Series 6 adapters and do not require additional training or qualification. Series 6E adapters have also been thoroughly tested with entry-level storage devices for desktop use and the entry-level server platforms, workstations and motherboards most typically used for basic servers, performance workstations or industrial PCs.

With its attractive price point, Adaptec Series 6E can be used as a connectivity product, with support for up to 8 (6805E) or 4 (6405E) SATA & SAS devices, and 128MB of DDR2-800 MHz DRAM cache for device acceleration. At the same time, the Adaptec RAID Code (ARC) delivers maximum reliability with RAID levels 0, 1, 1E, 10 and JBOD. ARC also offers RAID Level Migration (the ability to easily migrate RAID levels), Online Capacity Expansion (expand capacity without powering down the server), and Copyback Hot Spare (when a failed drive has been replaced, data is automatically copied from the hot spare back to the restored drive).

The Case for Cache

The fastest way for a RAID adapter to fulfill a read or write request is to serve data out of its cache. Savvy network administrators know that enabling the RAID adapter cache offers significant performance benefits, such as reduced latency in I/O requests, bandwidth and queue depths that surpass software application limits, and on-the-fly parity calculations on sequential writes.

With Hybrid RAID 1 & 10 Series 6E adapters offer maximum performance and reliability by combining Solid State Drives (SSDs) and Hard Disk Drives (HDDs) in a single array. Performing read operations from the faster SSD and write operations on both the SSDs and HDD results in tremendous performance gains over standard HDD RAID arrays. Hybrid RAID offers the benefits of both technologies and allows a better cost-per-operation.