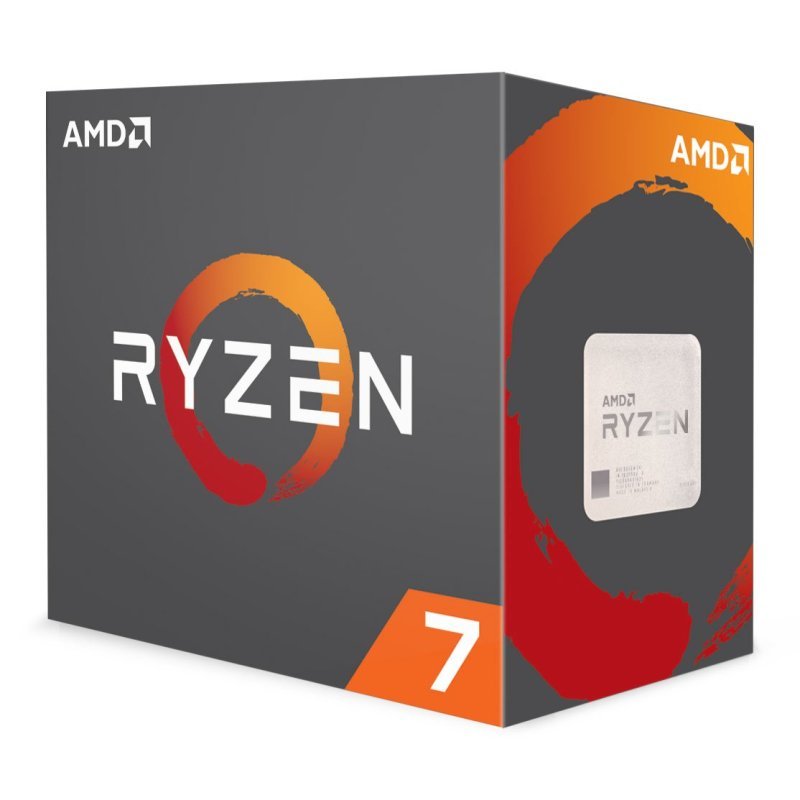 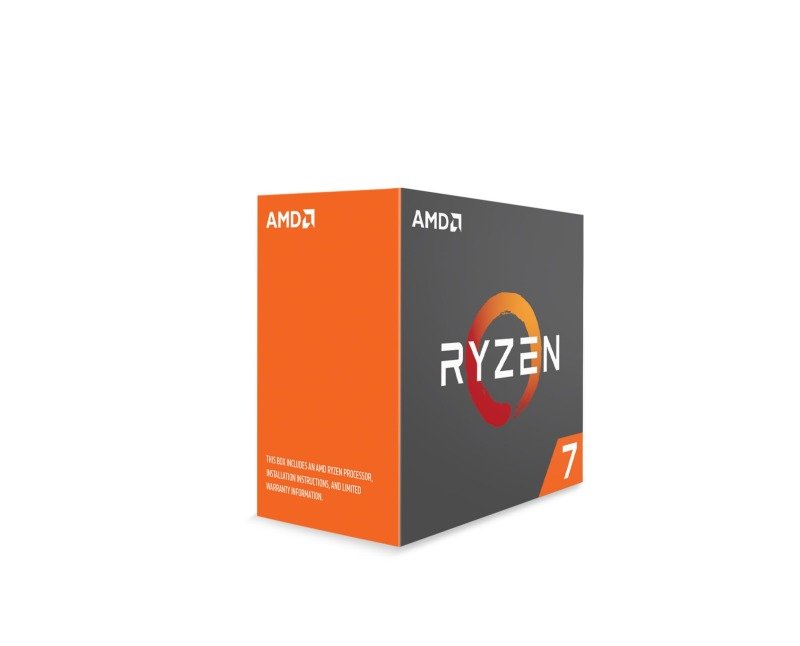 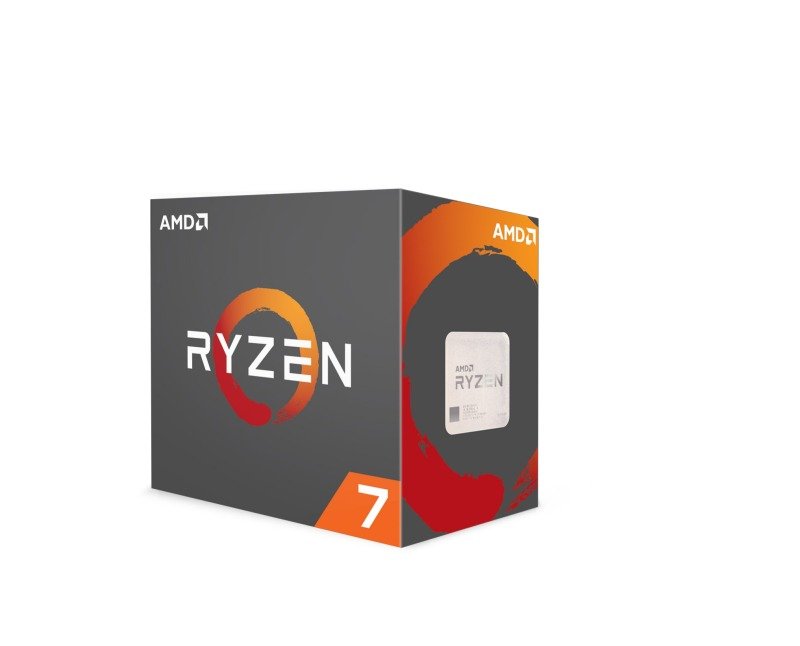 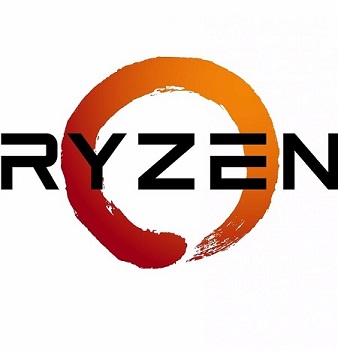 AMD ZEN - SCALABLE ARCHITECTURE WITH PRECISION BOOST TECHNOLOGY
The AMD Ryzen 7 1700X is a processor hailing from the new "Summit Ridge" generation with eight logical CPU cores that, thanks to Simultaneous Multithreading (SMT), are capable of processing two threads at once on each core. This means that the number of processor cores is effectively supplemented by the addition of eight further virtual cores to make a total of 16 effective cores. The 8-core top-of-the-range model functions at a high clock rate of 3,4 GHz per core which, due to the implementation of Precision Boost, performs real-time tuning in accordance with the performance demands placed on the processor. This holds true in respect to both games and applications, adjusting itself on-the-fly in precise 25 MHz increments within the TDP framework up to a maximum of 3,8 GHz.
In addition to these improvements the chip architecture also produces less heat and operates more quietly than any of its predecessors and is specially designed and optimised to work at high clock frequencies. These optimisations are due in part to the drastic improvements in energy efficiency and the low 95 Watt Thermal Design Power (TDP) of the CPU cores. The impressive specifications of this processor demonstrate the extent to which AMD's time has been invested into research and development. This goes a long way towards explaining the massive single-thread performance increase of up to 40% in terms of Instructions Per Cycle (IPC) as well as the manner in which the processor excels in highly parallelised multi-thread applications. These combined factors result in consistent and optimal performance.
The silicon is lithographed in the advanced 14 nm FinFET manufacturing process with stacked transistors (also known as 3D transistors). This striking reduction in scale has resulted in space being freed up on the processor die, thereby permitting the integration of a total of 4 MB Level 2 Cache and a full 16 MB Level 3 Cache into the centrepiece of the PC. Due to the intelligently controlled cache buffer and thanks to the "Smart Prefetch" predictive algorithms, Ryzen is capable of ensuring instantaneous data access and swift compute performance in all use cases - irrespective of whether the task involves gaming and Virtual Reality or cloud computing and virtualisation.
EXTENDED FREQUENCY RANGE (XFR) FOR AUTOMATIC OVERCLOCKING
AMD Extended Frequency Range (XFR)The days of racking your brains perfecting the art of the manual overclock are at an end as the CPU can control the entire process itself: As one of the "X" variants, the AMD Ryzen 7 1700X is equipped with the revolutionary Auto-OC feature known as Extended Frequency Range (XFR) to allow the processor's clock frequency to be drastically increased over the factory-set boost clock, provided sufficient cooling is supplied to the processor. As soon as the integrated CPU sensors detect the need for greater heat dissipation, the Ryzen CPU adjusts its clock rates to the respective cooling solution accordingly.
User intervention is therefore unnecessary - overclocking has never been so easy! Depending on whether CPU temperatures are being maintained by a comparably-small air cooler, a large (dual-) tower cooler, a more capable AiO or custom water cooler, or even extreme liquid cooling options like LN2, XFR affords access to premium- and enthusiast-level clock frequencies tailored to the degree of cooling performance provided.
Unlocked CPU: Foolproof Overclocking Thanks to the Unlocked Multiplier
All AMD Ryzen CPUs are "unlocked" and come with - as was the case with the "Black Editions" and "K" variants of earlier product ranges - an unlocked multiplier that allows overclockers to attain relatively high clock rates in a virtually foolproof manner. The aforementioned overclocks are easily achievable via manual alterations to the BIOS or UEFI, or by means of software tools designed for increasing the maximum factory-set boost clocks. Both an overclocking-friendly chipset such as the AMD X370, B350, or X300, as well as additional 3rd party cooling is necessary.
CUTTING-EDGE & LUXURIOUSLY-FEATURED: THE AM4 PLATFORM
AMD Ryzen 7 Box Motherboards equipped with the AM4 socket serve as the foundation for AMD's range of Ryzen CPUs, and they also offer cutting-edge interfaces. The CPU itself possesses four dedicated PCI-Express 3.0 lanes providing compatibility with modern SATA and PCI-Express SSDs in both M.2 and U.2 formats as well as support for the NVM-Express protocol (NVMe for short). A further 16 PCIe 3.0 lanes deliver abundant bandwidth for even high-end gaming graphics cards. Additional PCIe lanes for data storage, expansion cards and peripheral devices are allocated separately, dependent upon the chipset of the motherboard. The new AM4 platform also supports up-to-date external device interfaces like USB 3.1 Gen 2 with Type A and/or Type C connectors and high data transfer rates of up to 10 Gbit/s. The CPU's integrated memory controller supports AM4 motherboards as well as speedy and energy-efficient DDR4-RAM in dual-channel mode with or without ECC error correction.
Ryzen processors are also continually monitored by AMD's special "Pure Power" sensors. These sensors monitor temperatures, voltages and frequencies in order to perfectly tailor energy usage with an eye to different use case scenarios. Even with respect to SIMD instruction set extension AMD is now pulling up equal to the competition and has now mastered AVX2 (Advanced Vector Extensions), which enable dramatic performance improvements in floating-point calculations in scientific simulations, video-, picture- and audio editing, as well as video games and multimedia applications, in so far as the application supports this feature.