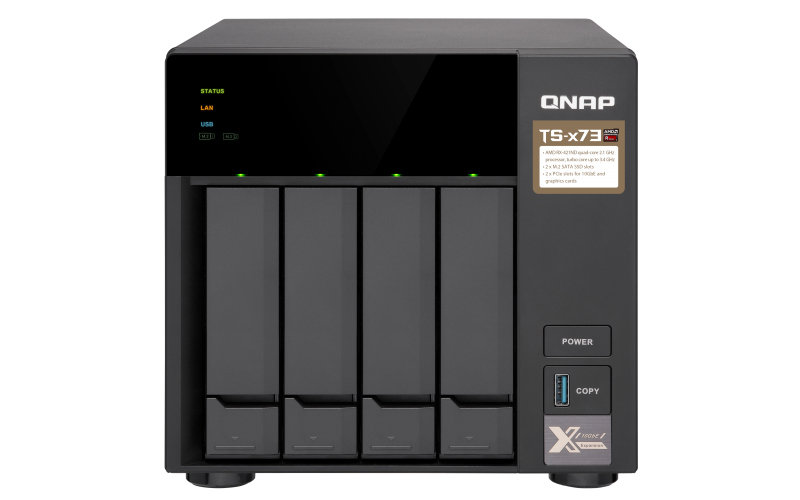 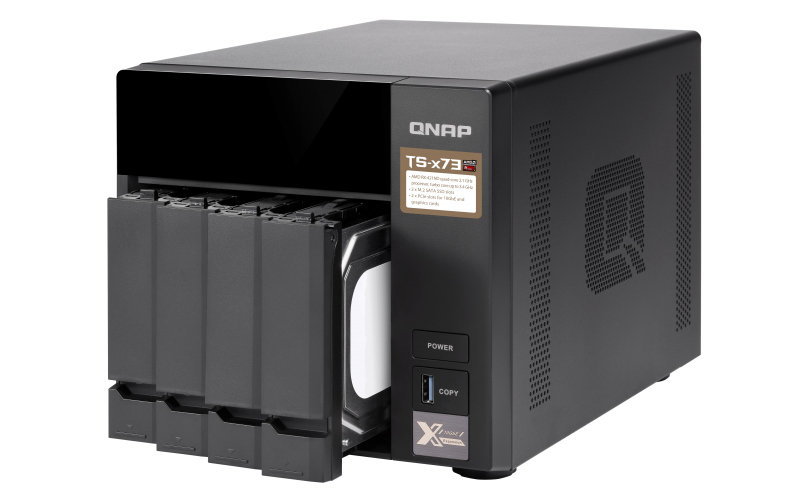 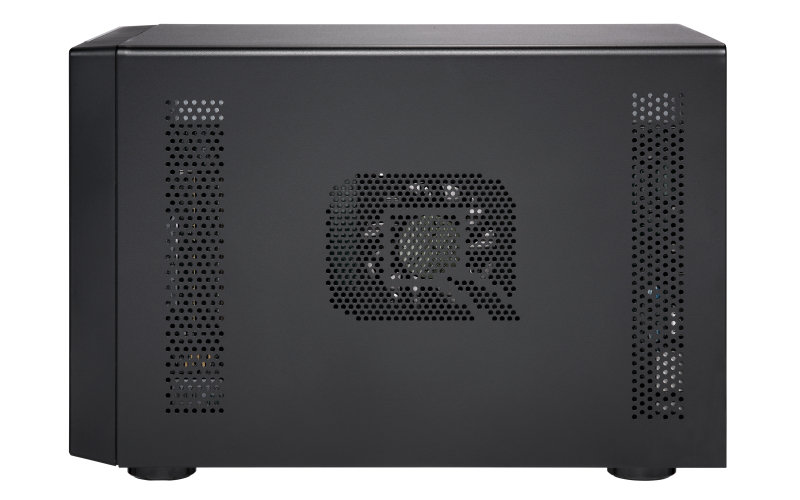 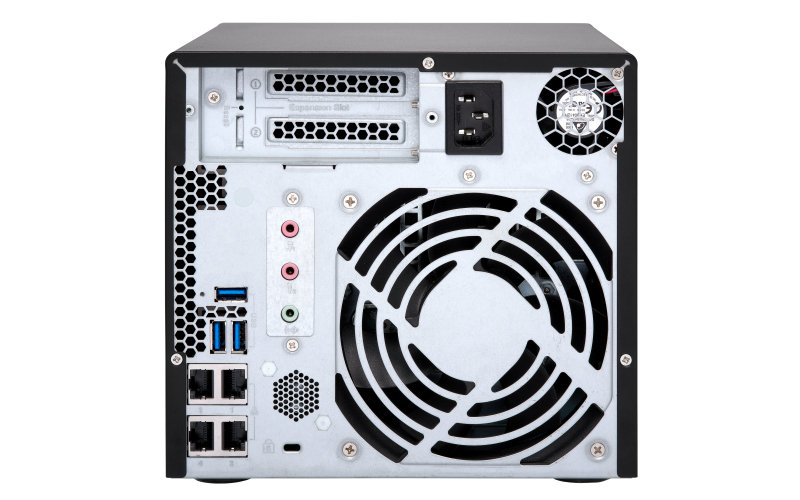 The TS-473 is powered by a high-performance and energy-efficient AMD R-Series CPU and provides two PCIe slots for greater functionality. You can install a QNAP QM2 expansion card to add M.2 SSD caching/10GbE connectivity; a compatible wireless card to use the TS-473 as a wireless access point; and an entry-level graphics card (for example: NVIDIA® GeForce® GT1030) to boost system performance for 4K video performance. The TS-473 allows you to flexibly deploy a wide range of applications with a more affordable budget.


Snapshots fully record system status and data. If files are accidentally deleted or modified, you can quickly restore the data from a snapshot.

AMD R-Series quad-core CPU
Equipped with a next-gen AMD R-Series RX-421ND quad-core 2.1 GHz CPU (Turbo Core up to 3.4 GHz) with up to 64GB dual-channel DDR4 RAM, the TS-473 enables lightning-fast multi-tasking with low power consumption for up to 2347 MB/s throughput with a 10GbE configuration. With a hardware-accelerated AES-NI encryption engine, the TS-473 also provides unmatched encryption performance in its class (up to 2310 MB/s with AES 256-bit full NAS volume encryption) to boost system performance while ensuring the safety of sensitive business data stored on the NAS.

SSD caching and 10GbE connectivity
The TS-473 supports the innovative QM2 PCIe card that allows for adding up to two M.2 SSDs. You can configure SSD caching, or create a RAID 5 tiered storage along with the two M.2 SSDs in the NAS*. As these M.2 SSDs will not occupy any 3.5-inch drive bays, the QM2 card allows you to maximize both your storage capacity and performance. There are also QM2 cards that include 10GbE 10GBASE-T connectivity to provide SSD caching with high-speed network connectivity on a single card.

Optimal computing power and 4K video playback with a graphics card
The TS-473 allows for installing a low-power graphics card (powered solely by the PCIe slot) to boost system performance. With a graphics card installed, the TS-473 also enables smoother video editing workflows and supports 4K UHD transcoding to deliver an exceptional multimedia experience. You can also use the QNAP remote control (sold separately) or the Qremote mobile app to use the NAS as a home theater PC.

Multiply your productivity
The app-driven QTS operating system provides solutions for simplifying file backup, management, search, and more. With File Station you can view and manage your files not only from NAS but also from multiple storage devices; the OCR Converter allows you to extract text from images; Qfiling helps automate file organization, and Qsirch helps find files quickly.

Optimized collaboration with seamless file sharing and sync
The TS-473 centrally stores data and various files, and supports SMB/CIFS, AFP and NFS protocols for file sharing across Windows®, Mac®, Linux®/UNIX® networks. Coupled with Qsync - a utility that turns a QNAP NAS into a safe, high-capacity data center for file synchronization - any file uploaded to the TS-473 will be made available for all linked devices, such as computers, laptops and mobile devices. You can sync shared folders and team folders for group file sharing, greatly enhancing the flexibility of team projects and collaboration. Files can be centrally managed using File Station, including files from mobile devices and optical disc drives. File Station also allows you to mount a remote NAS, and transfer files between your NAS and public cloud services for greater convenience.