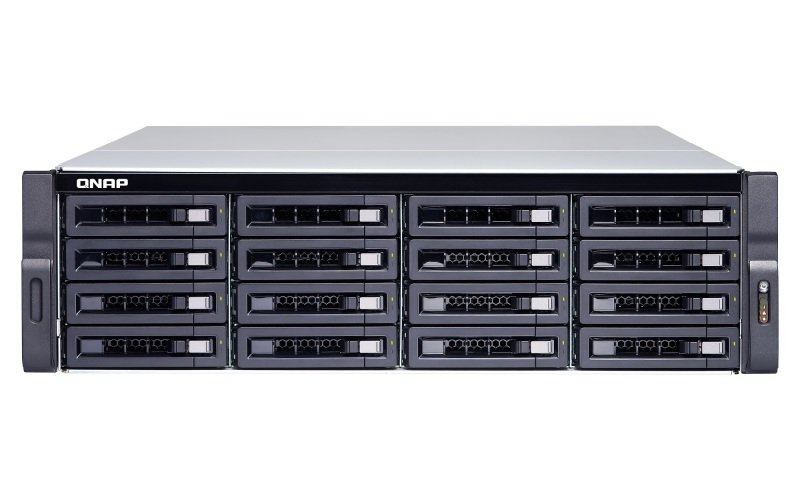 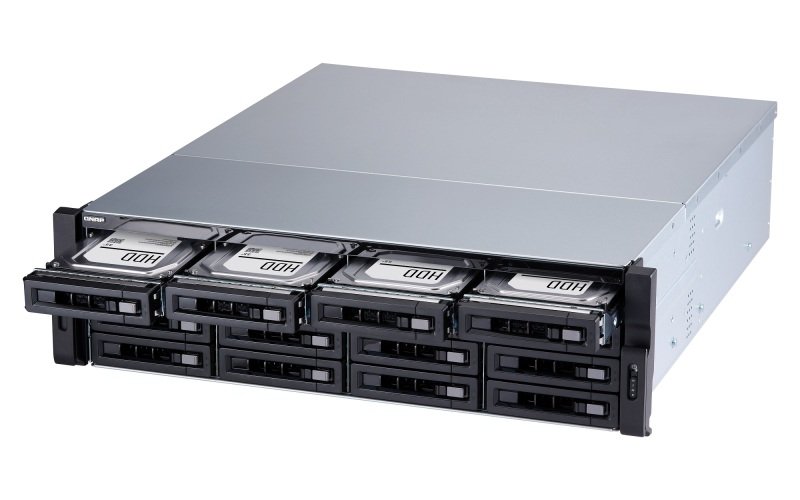 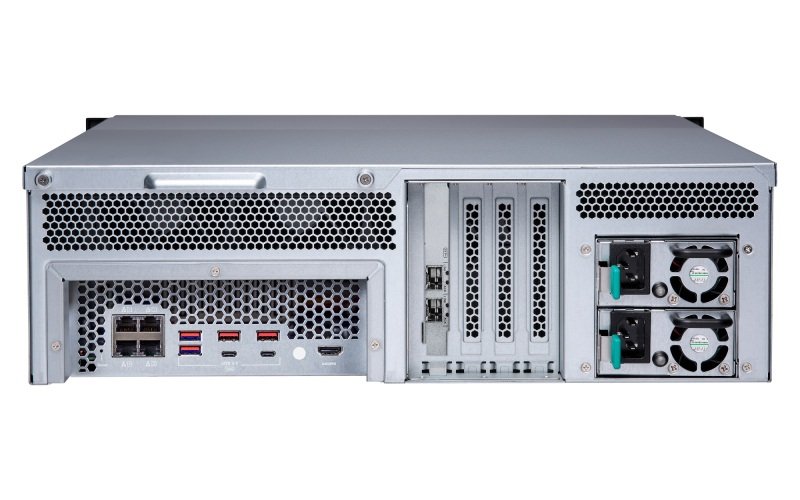 Dual 10GbE connectivity optimizes high-speed data transfer and VMware virtualization with iSER
The TVS-1672XU-RP provides two 10GbE SFP+ ports that use the Mellanox® ConnectX®-4 Lx SmartNIC controller. They support the iSCSI Extensions for RDMA (iSER) protocol, allowing data to bypass general network drivers, the socket layer, and to directly enter memory buffers of the ESXi server and storage to offload CPU workloads. When both the VMware® server and the TVS-1672XU-RP support iSER, it can provide up to 60% increased random read/write performance and 50% decreased latency, providing an essential tool to optimize demanding virtualization applications.

Recommended usage of PCIe slots
The TVS-1672XU-RP provides multiple PCIe slots. To ensure that the SATA drives have sufficient bandwidth, it is recommended to only use low-end expansion cards, (such as a 1GbE NIC, USB 3.0 card, or Wi-Fi adapter) with the PCIe Gen2 slot (Slot 1) as this slot is connected to the PCH. For high-end expansion cards (including 10GbE/40GbE NICs, SAS cards, Mustang-200 acceleration card, and graphics cards), it is recommended to use PCIe Gen3 slots (Slot 2, 3, 4) as these slots are connected to the CPU.

SSD caching and auto tiering enable 24/7 optimized storage efficiency
By enabling Qtier™ auto-tiering on the TVS-1672XU-RP, organizations can just buy the amount of SSDs needed, and attain the highest value/performance and optimal storage efficiency for data storage and sharing.

Maximize the value of SSDs with Qtier Technology
Qtier™ Technology empowers the TVS-1672XU-RP with auto tiering that helps continuously optimize storage efficiency by automatically moving data between 2.5-inch SSDs and high-capacity HDDs based on the data's access frequency. Qtier™ 2.0 features IO-awareness that empowers SSD-tiered storage with a cache-like reserved space to handle burst I/O in real time, greatly maximizing the advantages of SSDs.

Up to 128 monitoring channels in QVR Pro, 4K HDMI output, and real-time transcoding
The TVS-1672XU-RP has an HDMI 2.0 port which supports 4K (3840 x 2160) 60Hz output, allowing you to directly display surveillance videos and media files on a monitor or TV via HD Station. Featuring advanced Intel® UHD Graphics 630, the TVS-1672XU-RP provides high-quality 4K (H.264) and 1080p video transcoding, and you can easily convert videos to universal file formats that can be smoothly played on multiple devices

Flexibly allocate physical and virtual network resources to simplify network deployment
The Network & Virtual Switch application allows you to leverage limited physical network resources for unlimited virtual applications and centrally manage the entire network structure with a brilliantly-visualized network topology map. Flexible manageability enables you to reorganize physical and virtual network connections with greater ease, so you can allocate adequate network resources to the TVS-1672XU-RP, virtual machines and containers whenever needed. The network deployment is greatly simplified while your network management efficiency is greatly improved.

Snapshots for Volume & LUN
Snapshots are essential for NAS data protection, and their block-level feature makes them a dependable method for protecting data in the face of the growing threat of ransomware. The TVS-1672XU-RP supports up to 256 snapshots per volume/LUN, and up to 1,024 snapshots per NAS.

VM backup
With high performance, potentially huge storage capacities, integrated virtualization solutions, and support for snapshots that record the state of the system at any time, the TVS-1672XU-RP is perfect for backing up virtual machines.

Windows and Mac backup
Use the license-free QNAP NetBak Replicator utility to back up/restore files from Windows® computers. Time Machine® is fully supported for backing up Mac® computers.

Optimized collaboration with seamless file sharing and sync
The TVS-1672XU-RP centrally stores data and files, and supports SMB/CIFS, AFP and NFS protocols for file sharing across Windows®, Mac®, and Linux®/UNIX® networks. Coupled with Qsync (a utility that turns a QNAP NAS into a safe, high-capacity data center for file synchronization) any file uploaded to the TVS-1672XU-RP will be made available for all linked devices, such as computers, laptops and mobile devices. You can sync shared folders and team folders for group file sharing to enhance the flexibility of team projects and collaboration. Files can be centrally managed using File Station, including files from mobile devices and optical disc drives. File Station also allows you to mount a remote NAS, and transfer files between your NAS and public cloud services for greater convenience.

Complete control over system status and data security
In open network environments, data on connected devices may be exposed in a potential hack. The TVS-1672XU-RP provides numerous security options, such as encrypted access, IP blocking, 2-step verification, and more. Administrators can also control the access rights of each user to different folders, and use the following tools to enhance security management.