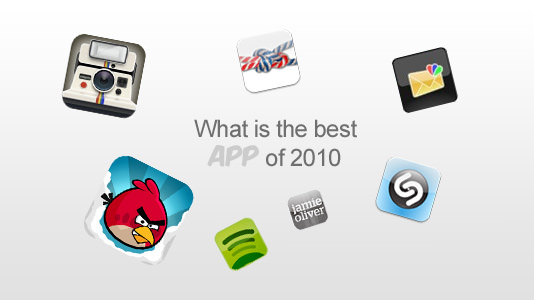 From Angry Birds to functions to catch you out sleep talking, there have been plenty of apps to choose from this year.

There are so many apps around these days, you can get everything from games, news and a tube map, as well as functions that enable you to choose your favourite knots and trees.

But what has been the best?

It is a tough question, but one of the more favourable, if not the most popular functions this year, has to be Angry Birds.

The title, which those with an Apple iPod touch can download for just 59 pence from the App store, sees consumers use a slingshot to launch birds at pigs in a virtual world. It sounds simple, yet it must be effective considering all the recognition it has received.

A Halloween version was released in October, which Pocket-lint described as a “breath of fresh air for anyone who … has thoroughly exhausted the original versions”.

And both the special edition and original edition made the Independent’s top ten paid apps list.

But those looking for practicality may be keen to download Tree Guide. Trawling through details about various trees may not sound like a great way to spend time commuting on a train, but it could be a vital piece of kit for a tree surgeon or a landscape gardener.

There are even apps which can help you prove a point. If you tell your girlfriend she has been snoring through the night and she denies it then the Sleep Talk Recorder could be the ideal way to prove you are right – and it is quite a cheap way to do so at a cost of 59 pence.

This app – which is the number one top paid app in the UK, according to the App Store – monitors sleep, but also comes with an advanced filtering function that can trigger the recorder in a millisecond.

However, overall it is tough to decide on a single best app of 2010 because there are people who will find them more useful than others, such as Knot Guide. Who wants to learn about the various combinations of knots? Yawn. Nevertheless, this function could be like a bible for a Cub Scout leader.

But as well as helping to improve our day at work, or our education, let’s hope for more weird and wacky apps to have an ‘appy new year with in 2011. Something to automatically do the housework would be lovely.