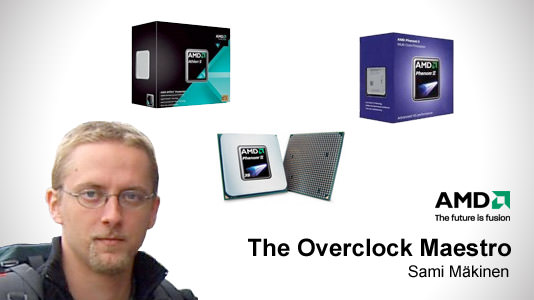 We have a treat for you today! We had the chance to speak to Sami Mäkinen, the multiple world record holder from AMD’s PR agency. Here’s what he has to say about the world of over-clocking and AMD’s latest processor.

Hi Sami, thanks for joining us. You’re a demi-god in the world of over-clocking. How does it feel to be a world record holder?
Thanks for inviting me. It’s always a great feeling to see a record score or MHz-barrier go down after countless hours of tweaking. Sounds very simple but you can get really addicted to the competitive benchmarking and overclocking. For me the goal was always to see how far a given CPU or GPU could be pushed. But, if I found out that someone else had managed to run the hardware faster or score higher I, of course, needed to improve my result. Overclocking world records and top scores are typically very temporary titles as the technology advances so quickly.

For those who don’t understand the concept, can you explain the term over-clocking and what you guys do?
Sure, in short it means running the CPU or video card above the default clock frequency. For example you could take a 3.2GHz chip and set it to run at 4GHz. Of course, the risk is that the system is not stable and might overheat. In order to stabilize the CPU the overclockers cool down the chip (even with extreme methods such as Liquid Nitrogen) and increase the voltage. It’s quite similar to car performance tuning. But instead of installing bigger turbos, adding fuel and aiming for fastest ¼ mile time the overclockers focus on cooling technology, tweak with voltage and timings and go for the highest benchmark scores. http://www.hwbot.org has all the latest overclocking records listed – you can also browse the results per CPU model, per benchmark or per country.

It’s worth noting that Overclocking voids the product warranty – so, while it’s fun and allows great performance gains you’ll need to remember that you are doing it at your own risk.

One of your record breaking experiments is on YouTube:  http://www.youtube.com/watch?v=wB0JodKgZ0A. (You got a 3Ghz CPU running at 6.5Ghz!) Have you had any recent record breaking attempts, or are there any plans in the near future?
We eventually managed to push the AMD Phenom II X4 CPUs to over 7GHz – the following video has the highlights:

The CPU process technology continues to improve all the time and whenever there is a new model or new CPU version available I will make sure to find out how far it can be pushed.

So when you’re not tinkering with PCs, what areas do you handle for AMD as part of your role at Bite Communications?
I’m currently working on the AMD Tech PR duties in the EMEA region. I look after the press sampling and tech support of new AMD CPUs, GPUs, platforms, software and drivers. I also get to join a number of events, plan and build demo systems and meet the key journalists.

The new AMD PhenomTM II X6 Processors is a great offering with ground-breaking multi-core technology. Have you used it yet and what do you think?
I’ve upgraded most of my test systems with the AMD Phenom II X6 CPUs . It’s a perfect do-it-all CPU model and has also shown great results in the Overclocking front.

What stands it apart from other processors?
The X6 CPUs (and the AMD platforms based on X6) offer the best performance in their respective price points. The fact that it’s genuine six-core CPU means that you’ll get excellent multi-tasking experience. Also, the new Turbo Core Technology allows the CPU to boost the clocks when only some of the CPU cores are being utilized. Utilities, such as AMD OverDrive enable full control and monitoring over performance settings and hardware details.

What will you be using it for?
Just about anything really: working, gaming, HD video editing and playback, music, web surfing…

What websites and/or forums do you find really useful for chatting to like-minded people?
hwbot.org is the key location for overclockers and folks who tweak with benchmarks. These days just about any high-profile hardware review site offers a great platform to discuss about overclocking, performance tuning etc.

We received great feedback about your corner at the Gadget Show earlier this year. Any thoughts as to whether you’ll be attending again in 2011?
I’m glad to hear that! 🙂  It was my first time in Birmingham and I really enjoyed the visit. Even got to see the crazy Guitar Hero live performance near our corner (I’ve tried to beat the score ever since – so far no luck!). If at all possible I will try to find my way to the Gadget Show Live 2011.

Many thanks for your time Sami and we wish you all the best in your future world record breaking attempts!

Microsoft Arc – not just any keyboard…
‘Appy New Year, but what was the best function in 2010?
To Top