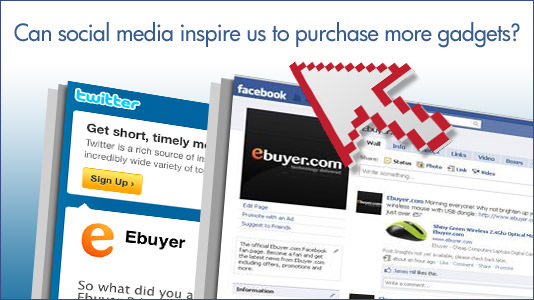 Are tweets making you buy?

With plenty of showbiz stars on social media sites, it might be inspiring people to purchase new gadgets to access these webpages.

Gone are the days when people had to handcraft letters in their neatest handwriting to their idol in the hope it would not become the next landfill addition. These days it is possible to contact a celebrity with a quick tweet or Facebook message, but is this kind of thing inspiring people to purchase more gadgets?

Twitter has rocketed with showbiz interest since it launched and it is an easy way to interact with a star. What’s more, if you are lucky to receive that all important reply once in a while it can make your day.

Celebrities have even started using social networking sites to bypass the newspapers and announce their own news themselves, such as Emma Bunton, who last year revealed to the world on Twitter that she is pregnant with her second child.

But would being in the dark over this inspire us to splash the cash on various forms of gadgetry?

In some cases I think it could lead to further purchases, as not everything you can do on an Apple iPad can be done on a mobile phone in terms of the various Twitter apps and YouTube capabilities, for instance.

But there are plenty of ways to access social media, such as mobile phones, laptops and desktop computers, as well as iPods and iPads.

According to Mark Caswell, editor of businesstraveller.com, there are more and more people logging on to the internet from mobile devices. And with the rise of applications ensuring there is more streamlined content, perhaps portable gadgets can prove more worth it than a desktop computer?

Staying in contact through the likes of Facebook and Twitter and viewing the latest crazes on YouTube seems a popular part of the modern day. And with some apps only available to people with an iPad or an iPod touch then maybe it is necessary to purchase these devices to be able to access the most streamlined content in the quickest time.

In addition to this, a study by Sheraton, which questioned more than 4,200 people in the UK, US and China, showed more than half (60 per cent) used social networking sites to keep in touch with people when they were away.

As social media is becoming such a popular part of the way we live, it seems people are missing out if they do not have the basic means to visit such sites. So, this certainly seems to be one justified reason why people opt to upgrade their gadget.