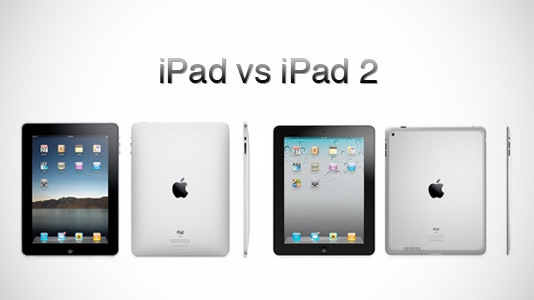 Which do you prefer?

Due to the ever increasing demand for tablets, led by the iPad, and much speculation over the last few months surrounding the iPad2, here is a rundown of what has and hasn’t changed.

Dimensions
The overall footprint of the iPad2 remains the same as the original iPad1. However, the thickness has been reduced by 4.6mm from 13.4mm to 8.8mm. Apple have also reduced the weight for all models:

Screen
There has been no significant update to the screen which remains to be the same 9.7 inch LED backlit 1024 x 768 that the original iPad1 has. There is some speculation that Apple may have changed the VR SG535 power chip.

Apple has replaced the old 1Ghz single core processor with a super fast dual-core 1GHz A5 chip. There are also questions about whether Apple have used the same 512mb if RAM that they have included in the iPhone 4, but we’ll have to wait for the teardowns to find out more.

Storage
The options for storage have remained the same. You have a choice of 16GB, 32GB or 64GB.

Price
The price remains unchanged for all models – iPad 2 starts at $499 for the 16GB Wi-Fi only model.

There are a few features that are new to the iPad 2:

Check out this Video from CNET UK to see just how slim the new iPad 2 is:

Back up those important files with an External Hard Drive!
Ebuyer TV Guide
To Top