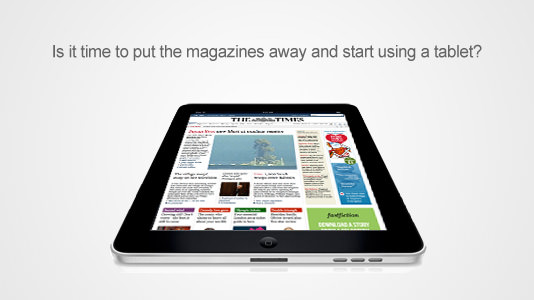 Feeding the need for news and celebrity gossip

Magazine publishers appear to be embracing the tablet computer market, but is it time to stop purchasing the print version of these publications?

For so long now magazines have been a great alternative to the daily newspaper. All that news combined into one weekly or monthly issue and plenty of glossy pictures to boot.

But with the rise of the tablet gadgets it appears this is coming to an end, as rather than just see pictures of your favourite celebrities strutting their stuff down catwalks or being papped walking their dog, these news items can become more real.

Tablet-style computers that come with video technology might just revitalise the age-old magazine and breathe a bit more life into someone’s commute to work.

However, it is not just about video content. It has been suggested that tablets could be a better way of guaranteeing returns from content as Marius Cloete, head of research at the Professional Publishers Association, stated recently that these gadgets are

a simple and effective

way of making sure revenue is generated from content.

Jumping on the tablet bandwagon recently has been Vogue, which released its first ever app for the Apple iPad in February. And who better to catch the readers’ attention than by putting Poker Face crooner Lady Gaga on the front.

The function included never-before-seen interviews and photographs, as well as audio and video. I wonder if fans of the Born This Way star would be happy to go without the exclusive footage in favour of a glossy mag?

Since this news, Conde Nast – which publishes Vogue – has announced it is going to release more iPad apps for its publications. And this will include further special edition Vogue apps for consumers to download and get their teeth into.

But Conde Nast doesn’t appear to be the only company that seems to know a good thing when it sees one, as Mr Cloete stated:

Tablet computing in particular has grabbed the attention of magazine content publishers, as the medium is visually rich and complementary to the printed magazine format.

What’s more, who knows what the next step will be in terms of magazines being reproduced on tablet computers? Will Lady Gaga be about to jump out of our screens in 3D?

Perhaps people should consider putting that publication back on the shelf and click the magazine app download button instead.

How cool is social networking?
Kitting out your office the Microsoft way
To Top