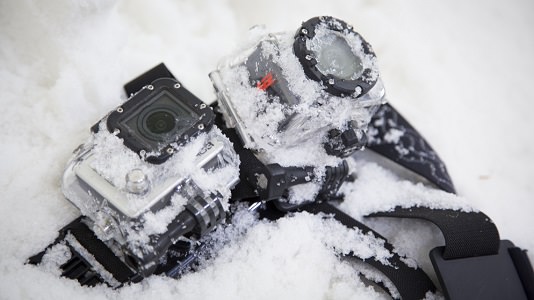 Action cameras are an awesome option for those wanting to record an array of footage in the toughest conditions. A good action cam should be able to stand up to a range of adverse conditions whilst also capturing quality video.

But what action camera should you use and what quality do you get from a top of the range option, compared to something that costs less?

We decided to test a top of the range Go Pro Hero 3 against a mid-range AEE SD Action Camera. We wanted to see what the difference in price equates to over the two devices.

In our test we wanted to establish what level of quality a budget Action Camera can offer and if the price tag of the Go Pro is really worth it? 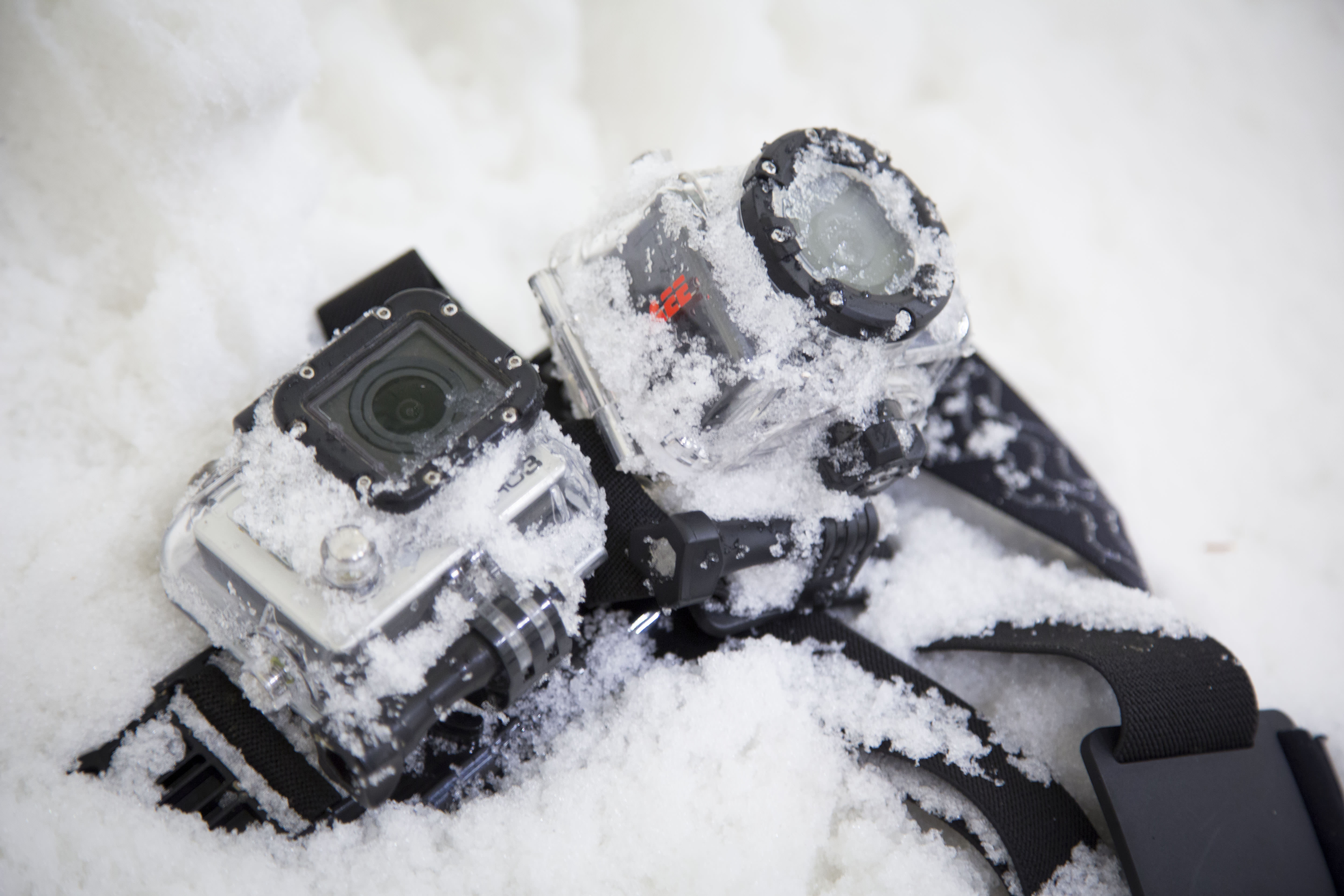 We took the two cameras to the Xscape action Centre in Castleford to test the devices over three different sports- Ski, Surf and Skate.

We would test the camera on snow, water and hard ground to the review picture quality, sound, durability, low light capture, vibration and a water test.

Since its introduction in 2010, Go Pro have been the market leaders in manufacturing rugged Action Cameras that produce a great quality image whilst staying super portable. However one of the biggest drawbacks to the GO Pro is its cost.  The Hero 3 is currently on the market at around the £300, that’s without any harnesses, stands or memory cards.

The AEE SD21 is relatively new fish to the Action Camera sea and will be hitting the market in early 2014 at around the £125-50 mark with many more accessories than its established rival. 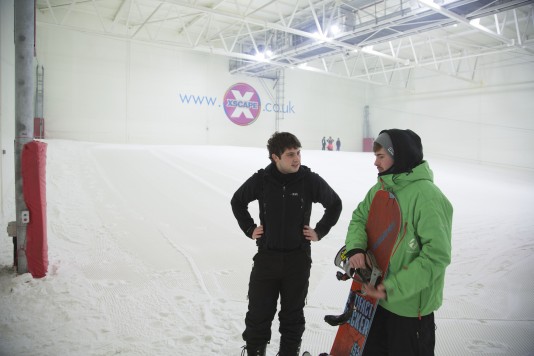 Our first test was at Xscape’s SnoZone indoor ski slope. We were looking to test the picture quality, slow motion capture and ease of use at low temperature.

The first thing we noticed in -5 temperatures was the ease of use. You can turn the Go Pro on and control everything it inside its protective case.

The image and picture quality was great, very crisp and produced good colour rendering from the device.

The chest harness made for some good shots but the best were achieved using the pole attachment we created… think like long boom pole camera stand.

We accidently turned on the Wi-Fi mode for a short time and it severely drained the battery of the device, worth noting for those using it all the time.

We attempted some slow motion filming in 100fps and the Go Pro was brilliant at 720p. The filming made for some interesting shots, and the stability of the camera, even with our shaky camera rig, stayed well planted.

The lack of an LCD screen made it a little difficult to determine the correct framing.

The AEE was a little heavier than the Go Pro making the mounting a bit harder, but the harness still kept it steady.

The laser sight and the included LCD monitor made it super-easy to correctly frame our shots. We ended up using this as a guide to frame both the cameras, meaning the laser does appear in our comparison video- This can be switched off in the menu quite easy.

The battery on the AEE, even with the LCD screen attached, lasted so much longer than the Go Pro.

The array of buttons on the case made recording a little bit fumbly and the inability to turn the device on/off in its case was frustrating.

Slow Motion was not  quite as good as the Go Pro, even at the same 720p resolution. The dynamic range of the Go Pro particularly in the highlighted areas produced a nicer image. 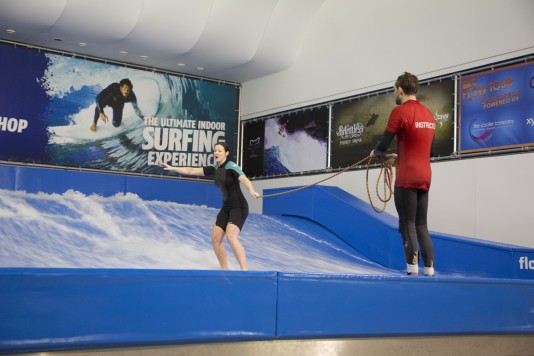 Our next port of call was FlowHouse indoor surfing, great fun for those wanting to hone in their surf technique or body board. This test would challenge the audio quality and waterproof case.

Sound quality was pretty similar on both cameras, giving a useable and clear audio. The AEE seemed to peak sometimes when really loud noises occurred (like hitting the water) but the differences in the two were negligible.

Water proofing held up great on both cameras, even after our pro boarder battered them around doing tricks.

After the test we saw condensation did appear on the AEE housing, however this could have been to do with taking it in and out of the case In varying heat and the temperature mix from snow to indoor.

Its worth noting the Go Pro housing is only able to dive to 40m (more than enough for our test) whilst the AEE boasts an impressive 100m depth.

Battery life took a bit of a rinsing at this point, with the Go Pro battery completely dead after about two hours. Amzingly the AEE was still going strong and did so for the next six hours!

As dusk settled we took the cameras outside for some low light testing. It was a bit of a disaster.

It was really dark outside, and both cameras struggled with trying to capture any quality images with such small image sensors. Neither cameras were really designed for night shooting but the go pro did out-perform the AEE in this area.

The AEE introduced a lot of noise and struggled with white balance in the orange glow of the street lights. The Go Pro still gave a grainy picture but the image was far more useable image.

As an additional test for fairness it would have been nice to try these cameras on a beach, in bright sunshine. However, our test was on cold December day in North Yorkshire not Sydney.  If our budgets ever increase we’ll run the test again. 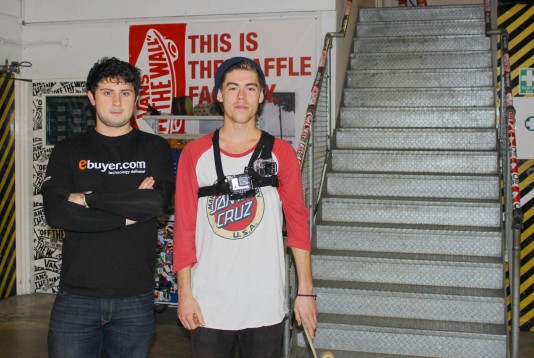 The final call for our Action Camera test was the Subvert indoor Skate Park. We enlisted the help of a few skaters to test the camera for durability and vibration.

The skate park was dimly lit and pushed both cameras to the limits in low light performance. Both produced a useable image but the Go Pro again had less noise and a nicer all round picture. The hard jumps, stops and turns really gave both cameras a shaking, but they both seemed to pick up decent video, which only became too wobbly a couple of times.

Using a pole stand for the cameras seemed to get nicer more stable shots, as there was no harness wobble. The use of the remote would be handy here, to control the system from afar.

By this time the AEE battery had valiantly given up after a stellar full day performance. We cracked into the additional battery pack which didn’t have an LCD screen. The laser sight came into its own here meaning we could accurately aim the shot, giving us more confidence in our framing.

In term of durability we had no issues with either camera both looking pretty solid after hitting the ground a few times and extensive movement in and out of the case. 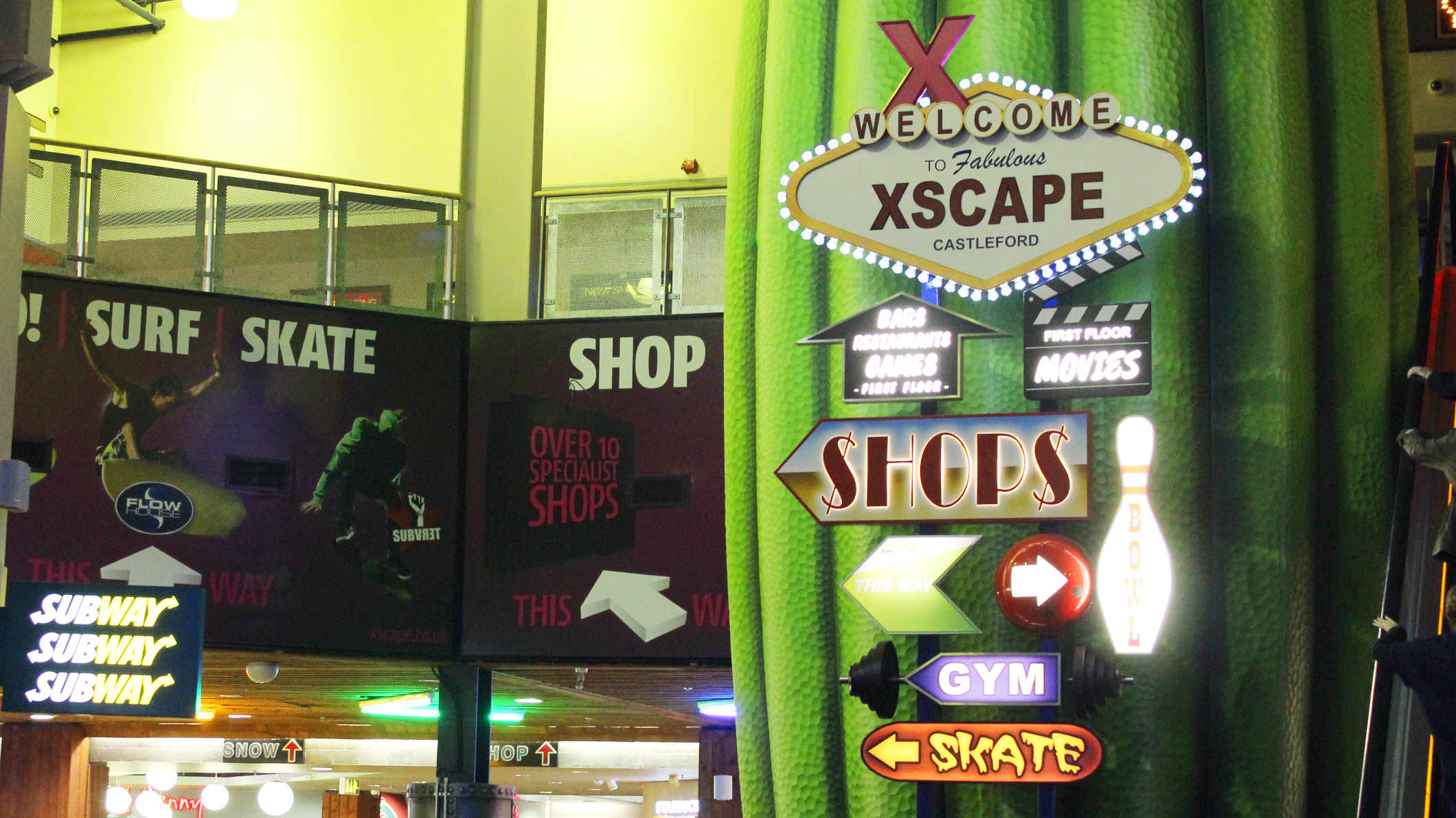 The Go Pro and AEE are both brilliant cameras to capture your action activities and make exciting home movies. We were really pleased with the quality from both devices.

The features of the Go Pro are undoubtedly of a higher quality, producing a better overall image and easier usability. It was the best camera on the day and was the choice of all our Pro’s. However the differences between the two may not be worth it for everyone, especially for the weighty £300+ price tag.

If it’s standard use you require, the AEE will fulfill your needs without having to re-mortgage your wife. It comes with more accessories and performs to a good standard for the price. It’s also a great option for those only using the camera on an occasional basis.

If it’s the sheer crisp quality and excellent dynamic range your put before the cost, then I guess you have already made up your mind. Go Pro It is.

Thanks to all the people that helped us out it the Xscape Centre Castleford. Thanks to SnoZone, FlowBoard and Subvert for their cooperation and loaning of their expert staff. 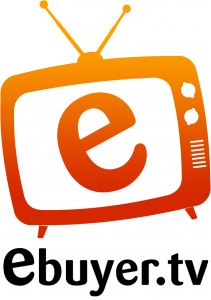 #askEbuyerTv if you have any technical questions you want us to answer, and we’ll try and create a video and tutorial for the most popular.