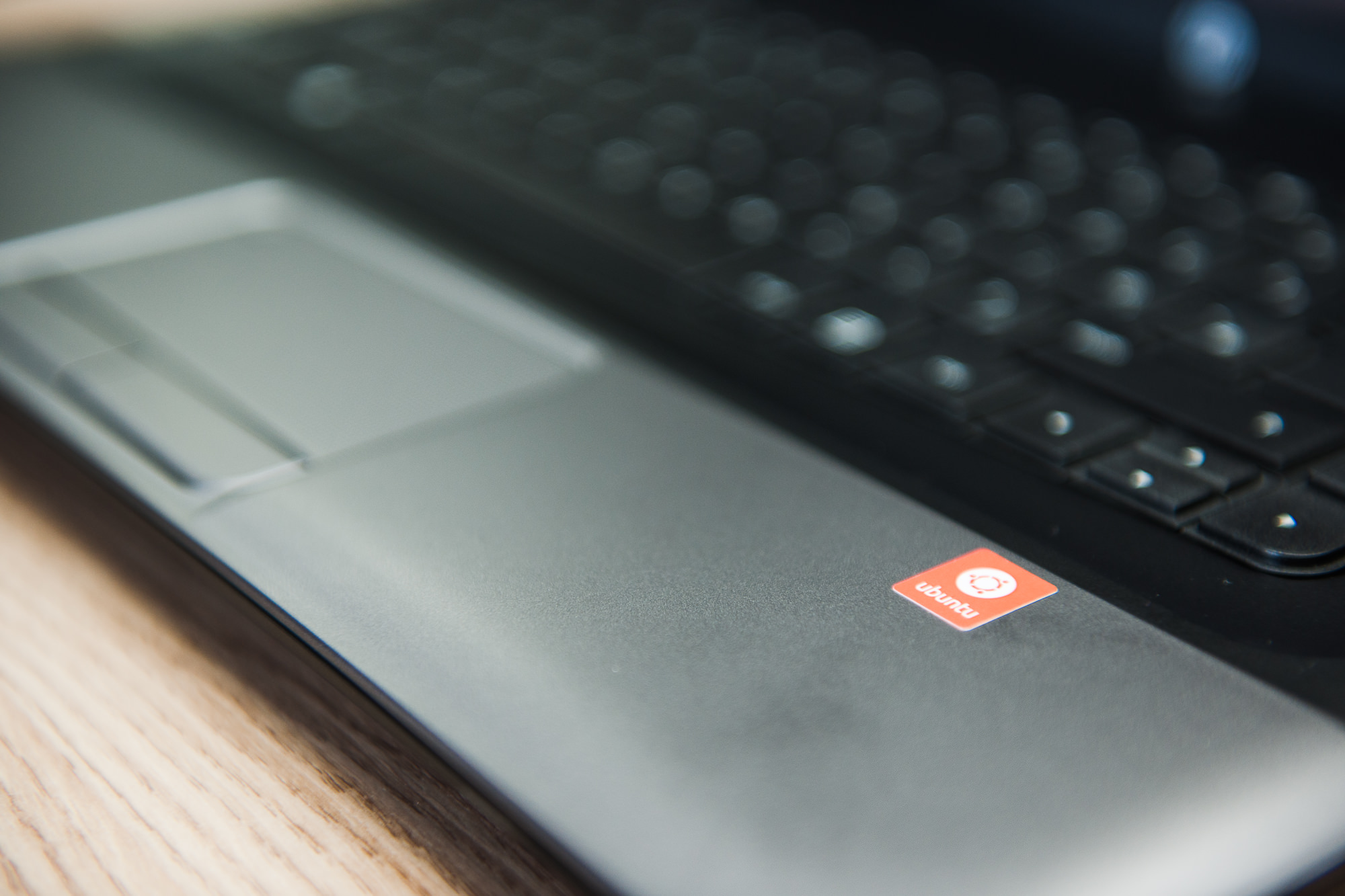 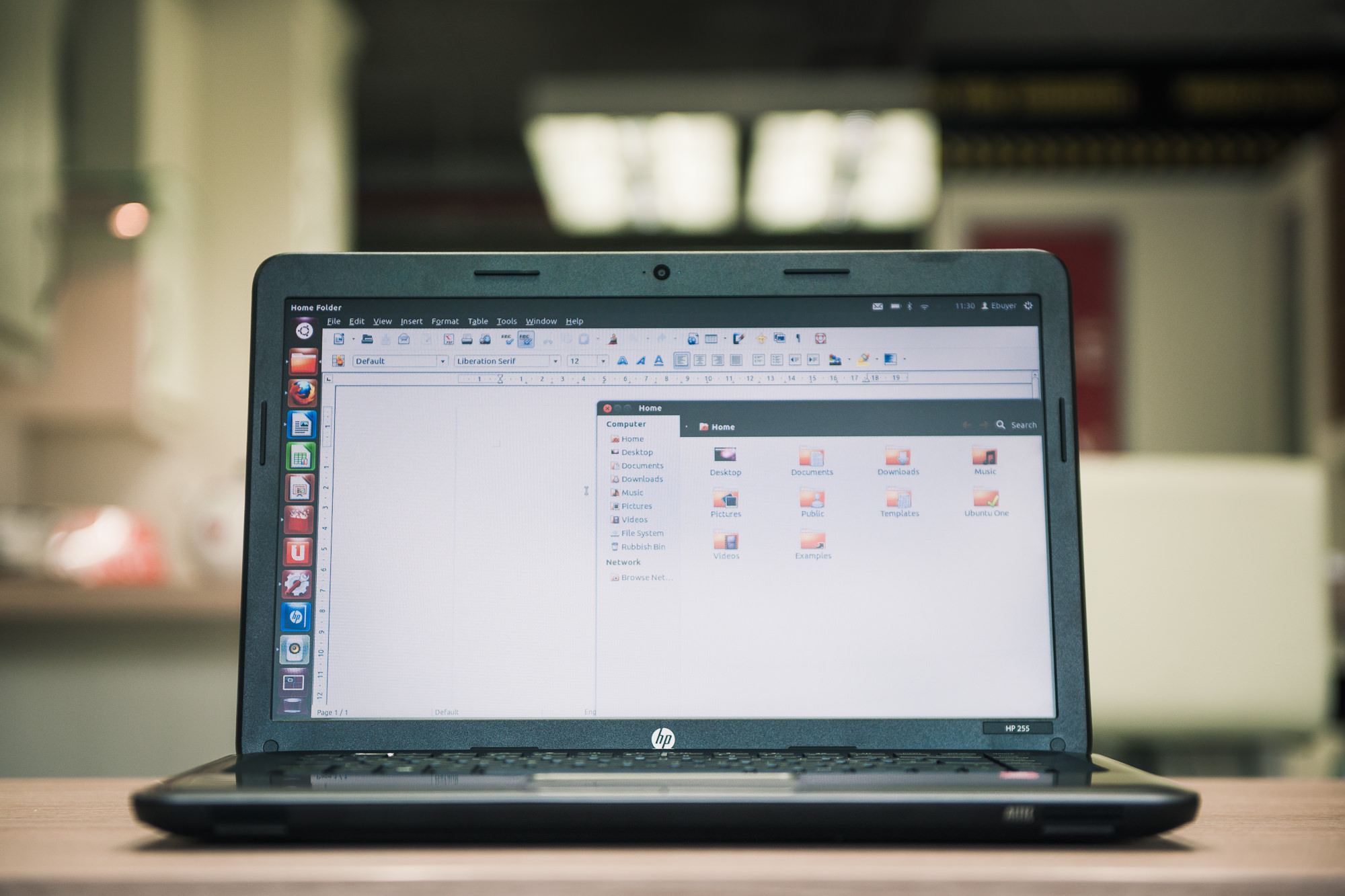 Up until this morning I was a complete Ubuntu novice, I had never touched any Linux operating systems and, frankly, knew very little about them… apart from the amusing penguin logo of its predecessor… I liked that.

Over the weekend, I decided to throw myself in at the deep end and attempt to use Ubuntu without any help. So here’s my initial take on the Linux operating system from the point of a true beginner… Me.

To start things off my level of computing is relatively competent. I use both Windows and Mac for various tasks, I’ve got a few android devices at home and work daily with the array of tech Ebuyer has to offer me. Admittedly, I’m no tech genius so I struggle with complex programming tasks, coding or anything that requires serious thinking time… So as a litmus test for the ‘typical consumer’, I’m right in the middle.

For this review we used the Ubuntu installed, HP 255 G1.

Out of the box 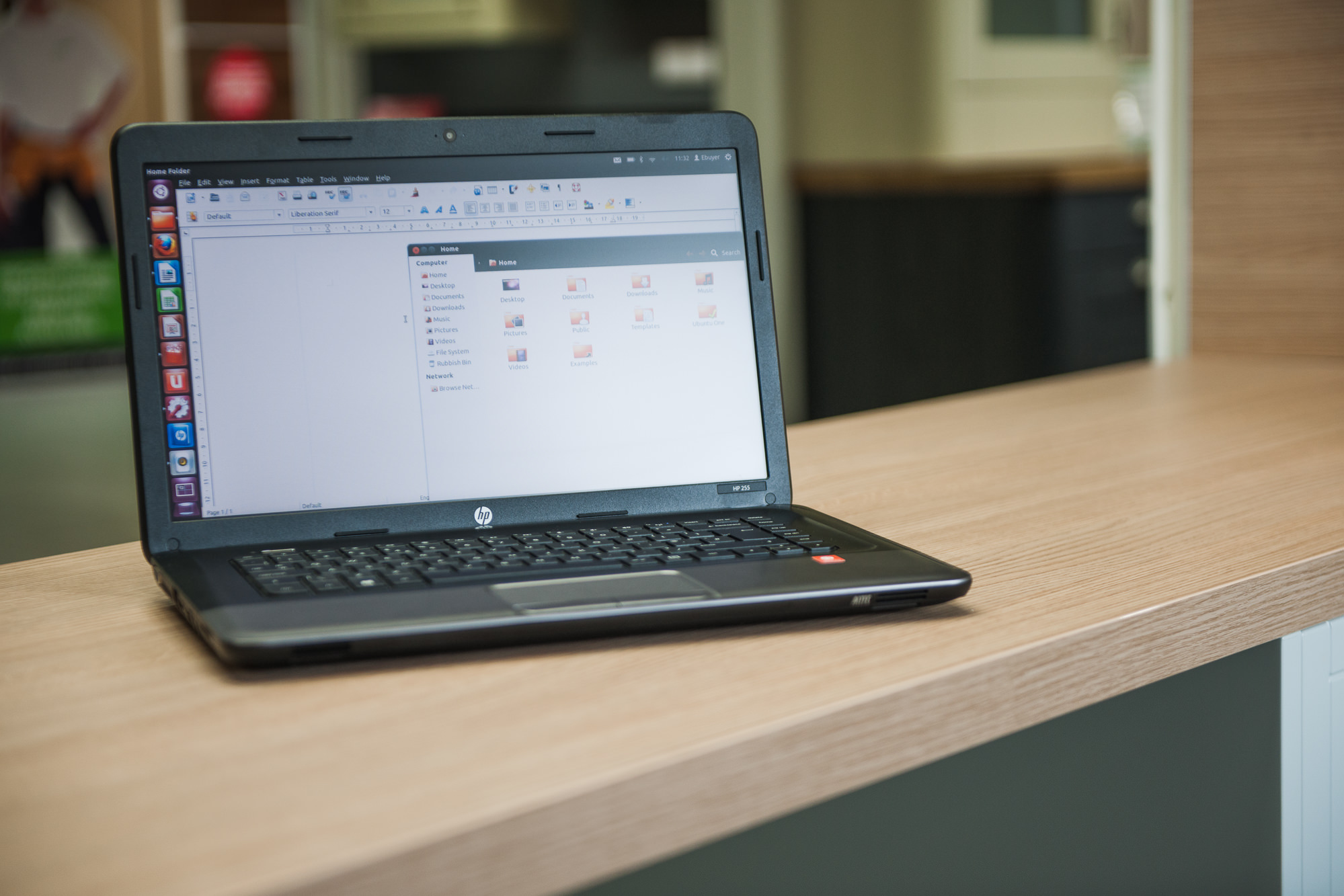 Getting set up with the HP laptop was pretty simple. The Ubuntu operating system asked for the usual names, pictures and passwords on initial set up, then played a jazzy animation to remind me I had not accidently bought a Windows PC.

Initial boot time was a little longer than on the Windows 8 Laptop I had setup the previous day, however this could be attributed to the processing power (AMD E1 vs Intel i5) not the OS. Overall the boot and first install took about 12 minutes without any major hassle… I was not scared off just yet

I liked it! Ubuntu feels like it’s taken the stylish designs, layout and tricks from Apple OS but kept the sensible things that actually worked from Windows. Admittedly, as a Windows 7 user, I was initially thrown by some of the features like the minimise/close button in the top left and simple tricks like ejecting a device in the recycle bin, but for starters, it was pretty straightforward.

My progress was slowed a little by some of the basics operational differences I found after years of Mac and PC use. It took a few frustrated clicks to realise a window doesn’t automatically jump to the front of the screen when selected and right click doesn’t unlock the world to everything.

Ubuntu feels basic, but I think this stripped-down, almost retro style works well. I like that that it’s not pretentious with extra animations or gimmicky apps and tabs, if you want to find something it’s only ever going to be in a few places.

The search bar’s not hidden away, it’s there glued to the top of the screen which seems sensible to me. As for the ‘launcher’ or sidebar as I shall be referring to it as- I can’t decide if having the icons down the left hand side is handy or perpetually annoying? I’d probably need to use it for a few weeks to find my heart swayed either way.

Having said that, I do miss the spacious feeling you get on a Windows machine and the slick design you find with Mac OS, the Ubuntu felt a little compact and short of space. 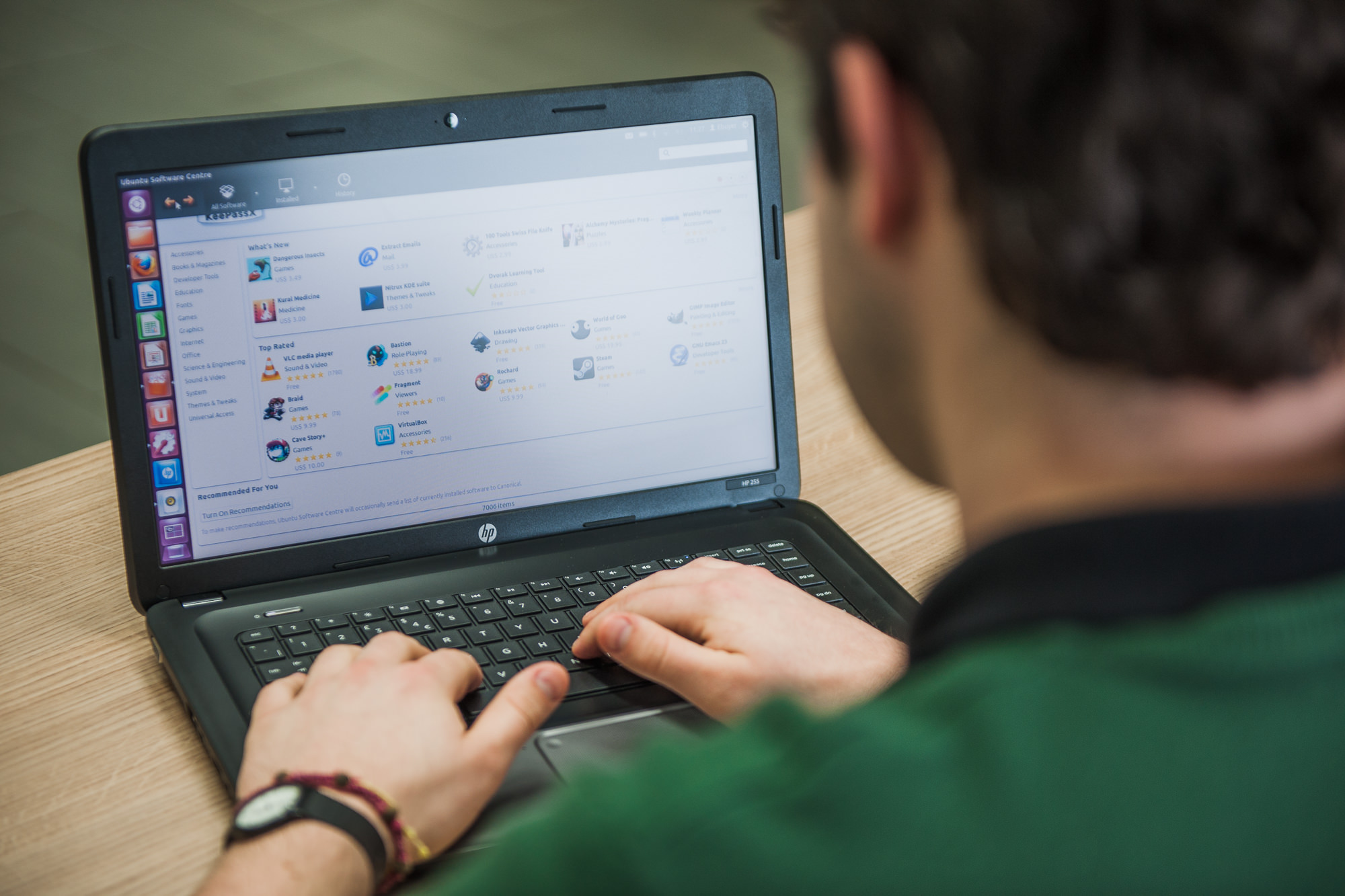 I’ll admit this is where I began to get a little frustrated so let’s start with the good bits first.

I love that you get free, open software built in. LibreOffice worked perfectly well as a replacement for MS Office even if it does lack a few of the flash extras you get on the Microsoft Original. I’ve got a lot of time for Firefox and frankly it feels more at home on the Ubuntu OS than on my other laptop, where I’m usually a Chrome advocate.

I was also impressed at how files were converted to Ubuntu-friendly versions automatically, no need to tiptoe around sending Word files or downloading clunky converters.

There are hundreds of free or cheap alternate bits of software in the Ubuntu Software Centre, where I’m sure those in the know could find perfectly suited replacements for mainstream programs.

This, however, is where I became a little frustrated with the OS. I found installing third party mainstream programs a little difficult. I tried to download a basic Skype package, which although it worked, insisted I added on patches and updates before it would even run- not something I’m used to after working in the universally accepted Windows world.

A few other simple downloads turned into a seemingly endless stream of patches and error codes. Admittedly most were solved in the end and due to my inexperience, however as a beginner put me off the OS a little. For someone with less knowledge, or patience, it could have been a deal breaker. 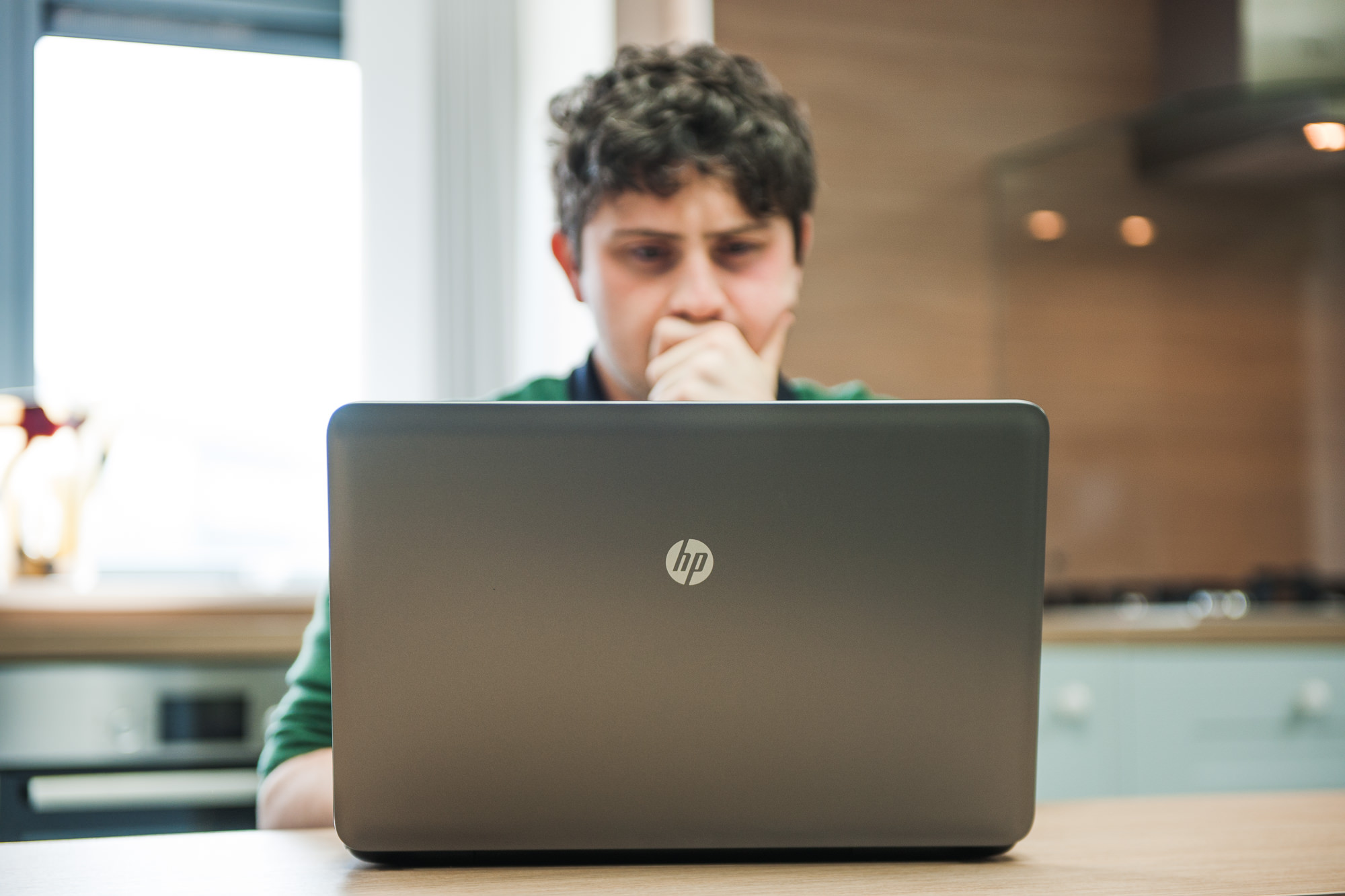 Ubuntu is super easy to the basic user. If you want to create documents, browse the net, watch movies, quickly edit pictures and all the stuff we do 90% of the time, Ubuntu is great.

However as I dug a little deeper, I found some tasks more difficult to master. This may be with my Windows/Mac blinkers on, but I found tasks that only needed a one-click set up on a Mac would give me a plethora of options and variations on Ubuntu.

It felt like the introduction was simple but getting deeper into tasks required an actual working knowledge of the OS. It was no longer simple clicks here and there, I had to actually think what programmes and files needed to be installed! 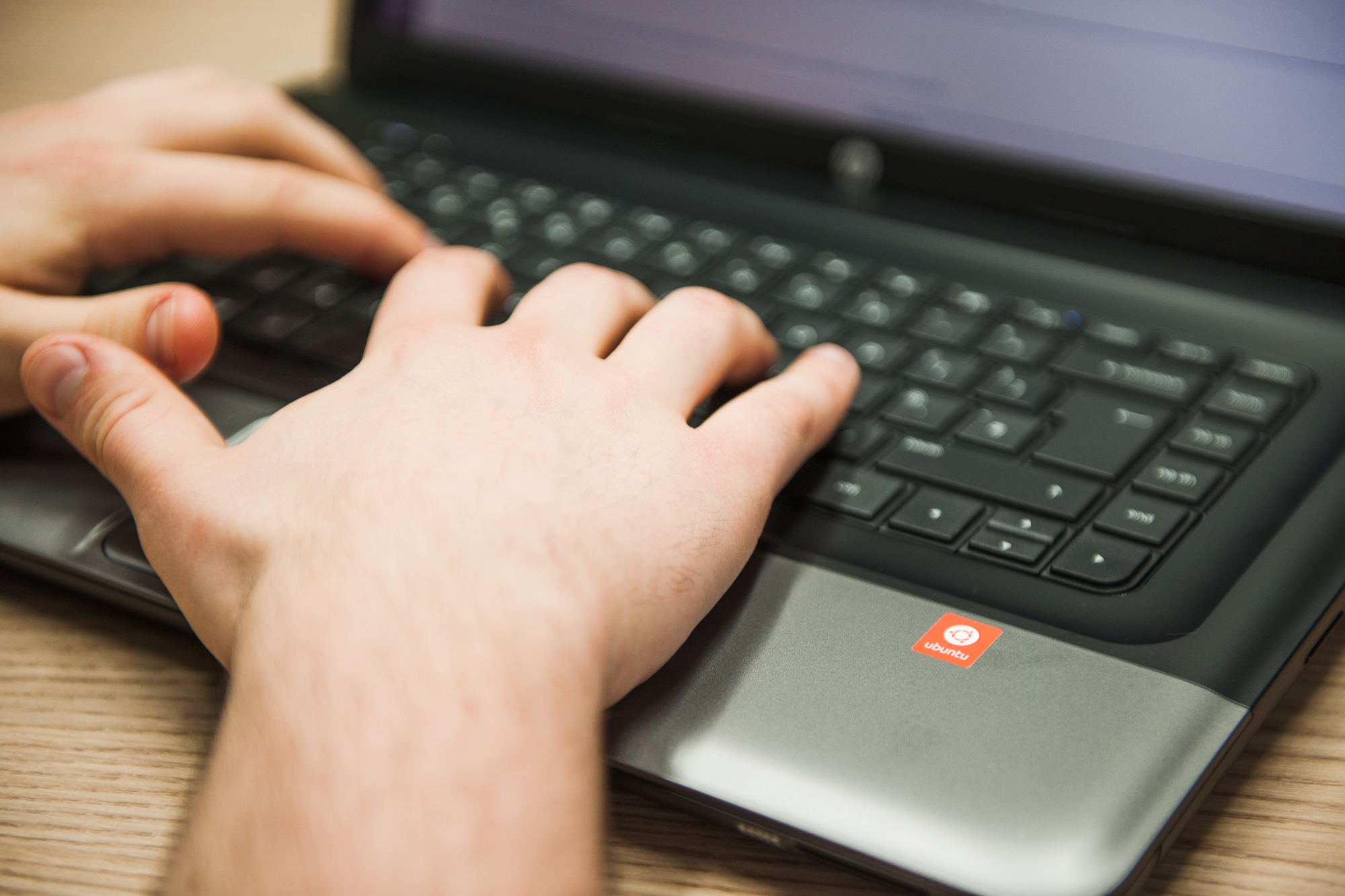 After my introduction to Ubuntu, I honestly think the Linux OS is versatile and accepting enough to be used by a range of users… but it’s not for everyone.

Naturally it lends itself to the highly specialised, computer lovers. The Linux bread and butter users, developers, programmers and the rest of the no OS lovers- These people won’t need persuading.

I think there’s a gap for basic users. Ubuntu is ideal for students wanting an all-encompassing computer with pre-installed free software, that does the same job a £100 Office package does.

I’m also going to throw another group of users out there, the older generation. I honestly think the Ubuntu system on a basic level, lends itself to simple computing. Bit of surfing here, maybe watch a movie, and create a written doc. It’s simple stuff on a simple system that is difficult to over complicate.

Am I a convert?

Honestly, no… but I won’t rule it out. I don’t think I’m brave enough to cut my Windows/Mac ties just yet. I like my mainstream games, software and programmes too much to go rooting around for the equivalent freeware, even though I really like the concept.

You know what Ubuntu is… It’s the Aldi of computers. Unbranded, well priced and surprisingly good quality once you get used it. It just needs a few more people to get on board so rookies like me aren’t scared off at the start.

For the time being, I’m going to stick to what I know, Linux is a step too far but I can honestly see why Ubuntu is getting more and more converts. It’s cheap, easy to use and allows more freedom than the Mac/Windows OS Monopoly.

I can also understand why more and more people are running a Linux OS on budget or low powered PCs, especially for travelling or simple office/online tasks.

I’ll be practising the next few weeks and will hopefully be won over by its charms.

For more information, check out the Ebuyer laptop guide here…

Will You be Using a Sat Nav this Easter?
Ebuyer raising the digital generation
To Top