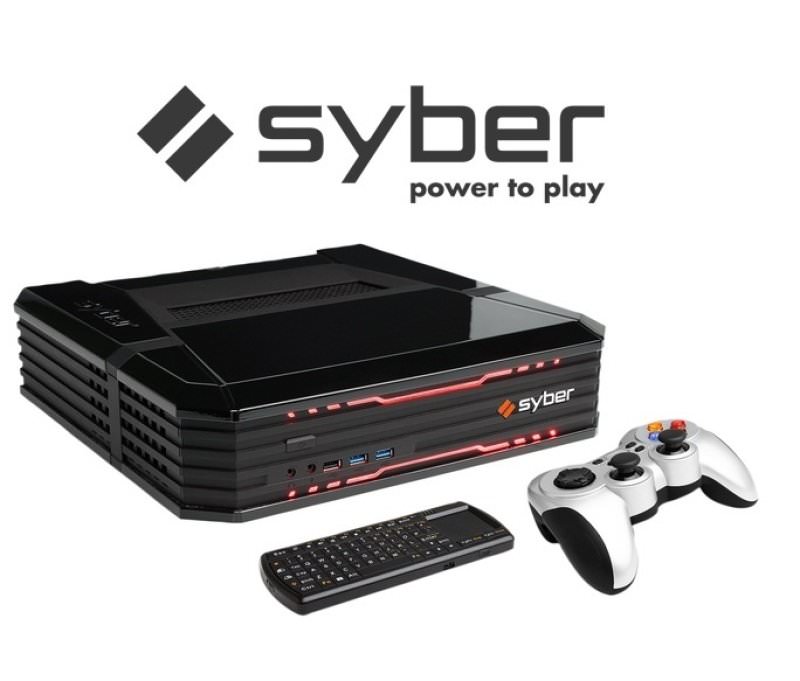 Leading US computing firm Cyberpower are taking the best of console gaming and blending it with the power and flexibility of PC gaming with the launch of some new PCs. The creation of a new dedicated division, Syber Gaming, will be followed by their first gaming PC consoles this December.

And with Ebuyer, you can be one of the first gamers to get your hands on one. We are pleased to announce the upcoming launches of the Syber Vapor I and the Syber Vapor A will be a week-long exclusive to Ebuyer from day of release, on December 10th 2014.

The Syber Vapor I and Vapor A are the culmination of Syber Gaming’s dream to bring the power and flexibility of PC gaming to you in the form of a practical and stylish console. Principally gaming PCs, the Vapor I and A are packed with the full range of hardware you’d expect from a custom-built PC from say Cyberpower themselves.

A number of key solutions set the Syber Vapor I and A apart from the conventional gaming PC or games console.

The Vapor’s style and compact nature means it will fit seamlessly into your living room. Hook it up to your TV and reveal Vapor’s world of potential.

Instantly transform your TV into a Smart TV with access to all your favourite catch-up and content streaming sites.

Unlock your gaming potential with access to a bucketload of games from online stores such as Steam, Origin, UPlay and more, both to download and stream. With the choice of games ten-fold that of the latest games consoles, as well as considerably cheaper, the Vapor is ideal for any core gamer.

The Vapor also runs Windows 8.1, making it possible to run any of the practical applications a desktop is capable of. Browse the web, video chat, stream music and more, all of which is beamed from your living room or bedroom TV.

What’s more, the Vapor I and A are fully upgradeable. While the latest games consoles, and the hardware within them, quickly become out of date as technology advances, the Vapor can move with the times. The Syber Vapor and its internal components are interchangeable, allowing you to upgrade everything from the motherboard to the graphics card, all at your discretion.

Both the Syber Vapor I, priced at £599, and the Syber Vapor A, at £499 are available in a choice of black or white, and come bundled with both a gamepad and a touchpad/keyboard combo.

Head to the Ebuyer website to pre-order yours and receive it on release day, Wednesday December 10th, a week before any other retailer.