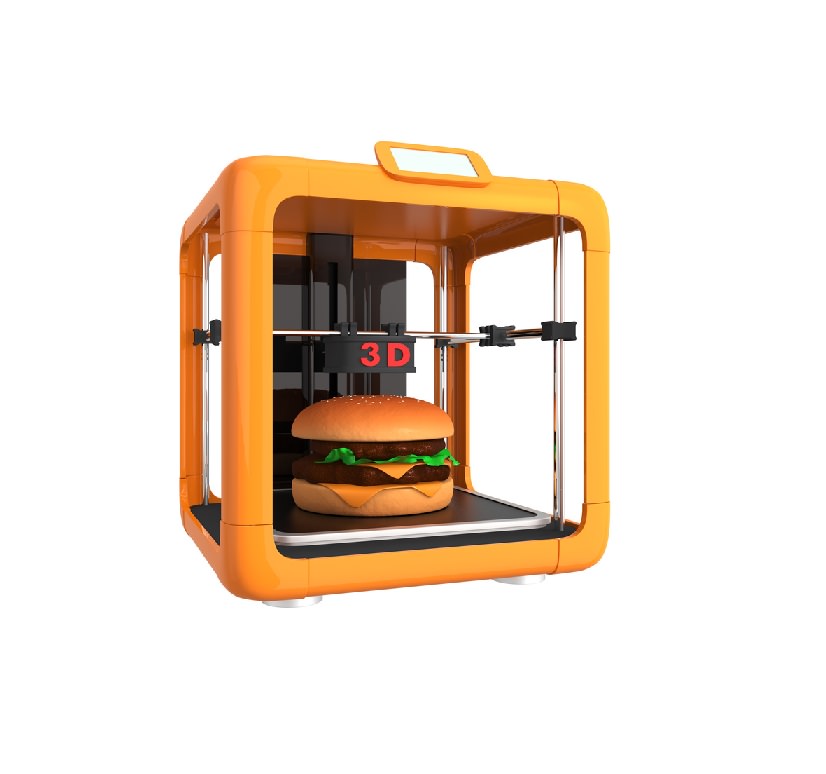 When you hear the words ‘3D printer’, what comes to mind? Plastic figures? Key rings? Mechanical parts maybe? Well, how about food?

Demanding your computer to print out your dinner might sound like something out of Red Dwarf, but this weird reality is actually much closer than you think. Some industry experts believe we’ll actually be nibbling down on printed food within the next 10 years.

A number of start-ups and manufacturers are beginning to create and develop digitally printed food in a bid to create unique and helpful culinary concoctions.

The US army is currently researching the use of 3D printers in creating battlefield nutrition packs. The idea is that a soldier or group could be equipped with a personalised 3D printer that can change a base ingredient into a real meal. For example, creating a power or energy bar made out of highly nutritious glucose that is specifically tailored to withstand the rigours of combat, plus all the nutrients troops need to stay active.

3D printers blend a mixture liquids and powders into complex shapes, but it’s not clear if the current crop of printers could mould solid natural food like carrots, while still keeping the food’s nutritional value and taste.

US Army ration packs currently use MRE or “meals ready to eat”, which are predominantly dehydrated food packs; easy to store, transport and cook.

How Do They Work? 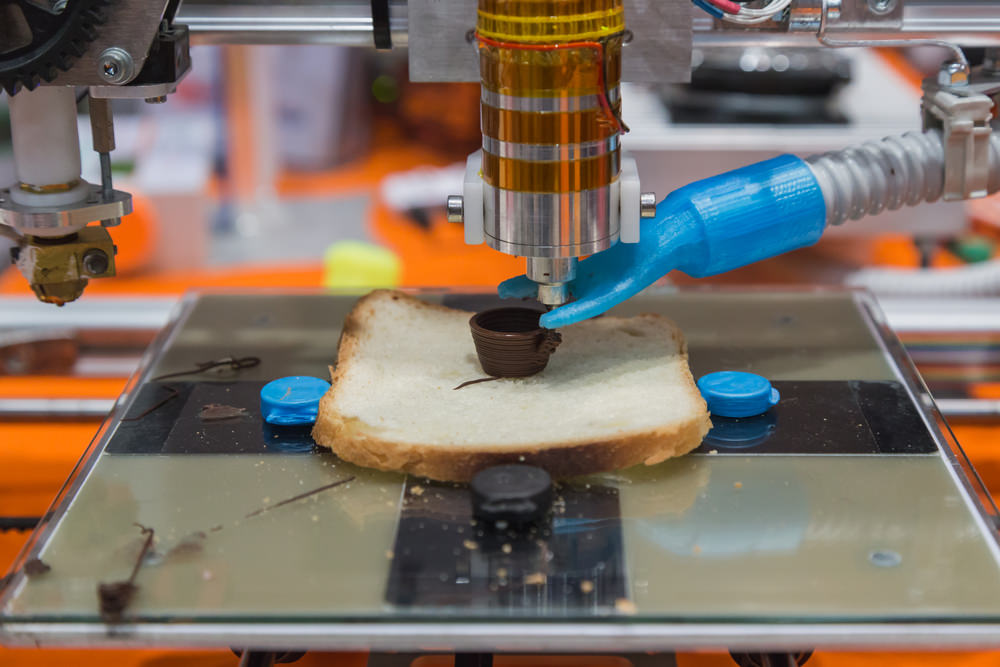 This is how the concept of food printing came about. 3D food printers can use materials like chocolate or sugar syrup, which start off as a viscous liquid, but then dry out and can be built into a 3D object.

Earlier in the year, 3D Systems unveiled its food printer at the Consumer Electronics Show (CES) in Las Vegas. The printer essentially sprays layers of sugar mixed with water. As the sugar dries and crystallizes, the 3D object can be built upwards, layer by layer. 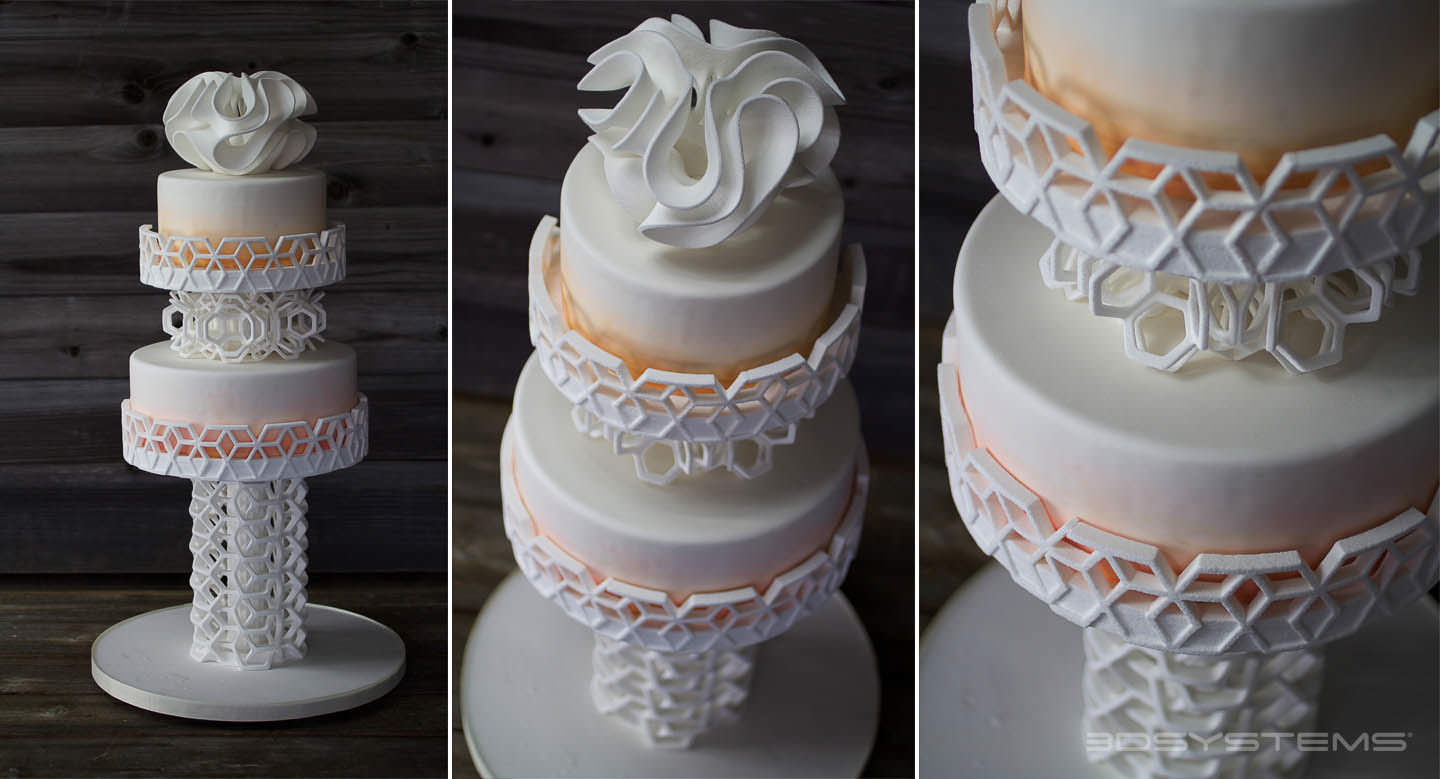 Many of these first stage food printers work with sugary products like chocolate and syrup. These sugary bases are easy to work with and dry quickly, making them the perfect building blocks for a 3D print. Products like the ChefJet can create amazingly intricate patterns in a matter of minutes that would otherwise take a master baker hours to craft.

Sugary snacks aren’t the only printed nibbles on the market. Engineer Anjan Contractor currently works with NASA developing a food printer suitable for use by astronauts. His first invention was a machine that could 3D print a pizza, complete with tomato sauce and cheese.

Contractor’s printer uses freeze-dried powdered ingredients that combine with oil and water to create the usable ‘paste’ for printing. All you need to do is bake! 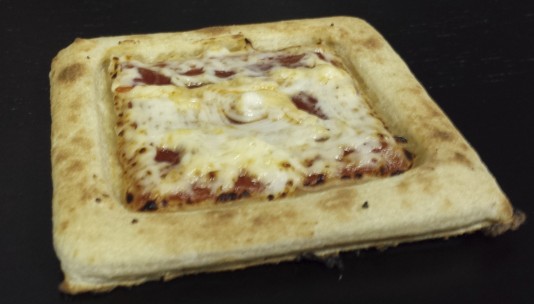 The idea of 3D printed food is not to substitute your afternoon banana, but instead replace the processed, long stored packaged foods in your cupboards.

If you can print out food when you actually need it, you minimise the risk of waste. There’s no need for a loaf of bread to go mouldy in the cupboard when you can simply print out the number of slices you need.

For those short on time, 3D printers can cut out the preparation process. The US start-up Natural Machines created the Foodini 3D printer to incorporate fresh ingredients into the digital printing world.

The Foodini automates some of the preparation process. Instead of hand-wrapping ravioli, the machine can mix and print the pasta; the same being true of dough or potato. It’s essentially halfway between a printer and a personal chef.

3D Prints for the Elderly

A team of researchers in Germany are working on creating printed food suitable for elderly people. Their idea is to create ‘easily chewable’ food that still looks and tastes like its crunchier counterpart.

The ‘Smoothfood’ idea could also be adapted to feed those with injuries to their mouths or medical issues meaning they can’t process solid food.

So keep your eyes open for a trickle of 3D printed foods coming your way in 2015. Who knows, your next pizza could have been assembled by a robot!