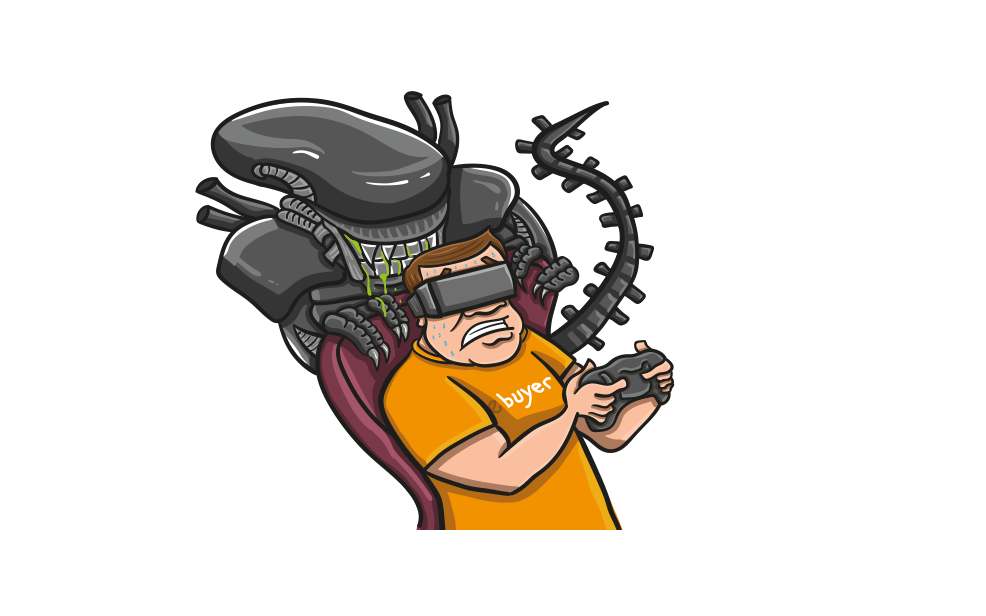 Depending on your definition, millions of people are spending millions of hours in virtual realities every day. Each time we fire up our games consoles or investigate the latest happenings on social media, it could be said we’re entering virtual worlds; each buzzing with activity, but fundamentally distinct from the comings and goings of the ‘real’ world around us.

The Lawnmower Sham
I’m slightly embarrassed to admit that my earliest understanding of virtual reality (VR) arrived via 1992’s sci-fi turkey, The Lawnmower Man. For anyone young or sensible enough to have missed this cinematic treat, it’s pretty much Flowers For Algernon meets The Matrix with a side order of early ‘90s godawful CGI. It was also about a million miles from that decade’s or, for that matter, this decade’s level of VR sophistication.

Not long after, I actually gave VR a go in a gaming arcade in Florida and this terrifyingly dull encounter pretty much slammed the lid shut on my optimism as far the future of virtual reality. “The game’s a bit like the movie, Aliens,” said the guy in charge of the clunky platform and headset. Yeah, maybe if James Cameron had built his sets out of DUPLO and based his creature design on Space Invaders. I spent a bewildering five minutes crashing into flat grey walls and dying at the hands of jerky green blobs. I did not walk away impressed…

…but it was still better than Colonial Marines. Burn. 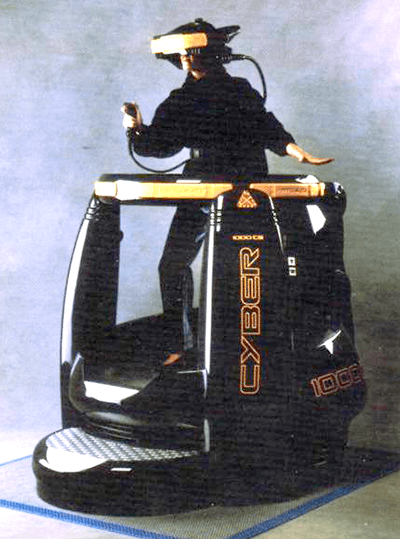 It was acceptable in the early ’90s
(Image – reddit)

The Virtual Turning Point
As you can probably imagine, the positive yelps echoing around the web following the emergence of Palmer Luckey’s Oculus Rift and its subsequent $2 billion snatching up by Facebook caused me to do little more than arch a cynical eyebrow. However, that all changed back in March when I tried a couple of novel applications of modern-day VR at EGX Rezzed.

The first of these applications was the Roto VR. Essentially an accessory to complement the Oculus Rift and make its use more natural, the Roto is a chair attached to a motorised circular platform. Users hop in the seat and place their feet on a turntable, using it rather than the usual gamepad thumbstick to determine the direction they’re facing within a game.

Sounds pretty weird, right? Well, from the outside, it admittedly looked pretty weird and it wasn’t until the Ebuyer team gave it a try that we realised the Roto’s simple yet powerful potential. Virtual reality, as we’ve discussed, is all about bridging the gap between the physical and the virtual world.

Roto Learning
There have been a number of attempts at manifesting a player’s physical movements within a game, not least the slippery dish and sophisticated sensor shoes seen in the Virtuix Omni. Such attempts go some way toward allowing users to traverse virtual landscapes at the cost of actual physical effort, but wouldn’t this become literally tiresome and distracting during an extended gaming session?

According to the headset’s creator, the Oculus was designed to be experienced from a seated position. Depending on your sensitivity to such things, the ‘floaty’ VR experience can induce nausea in some users, particularly those susceptible to sea or motion sickness.

This discomfort is likely brought on by the fact your brain isn’t receiving the full range of sensory signals it usually associates with real-life, three-dimensional movement. For example, spinning smoothly around in-game at the behest of a thumbstick doesn’t stimulate the balance centres of your inner ear in the same way as if your span around on the spot in reality. We all know what happens when you do that too many times.

The Roto, however, goes some way towards fixing this issue; when you turn in the game, you turn in real life. Knocking nausea on the head allows players to have the same extended play sessions they’d enjoy on the sofa, without the need to deploy a sick bag every ten minutes. 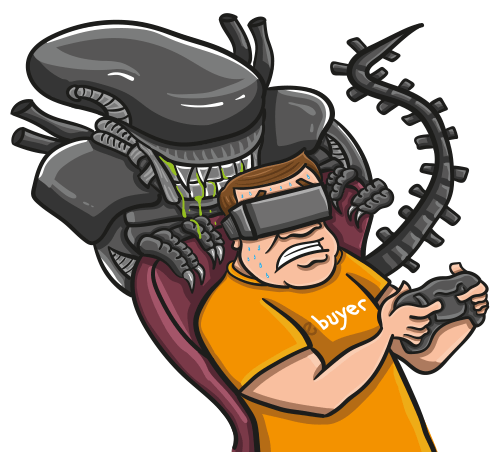 The Acid (Blood) Test
It was a sort of amusing irony that the game the Roto developers brought along with them to demonstrate their spinning chair was Alien: Isolation. As anyone who’s had the dubious pleasure of playing this title will tell you, it’s a pretty unnerving experience. Well, imagine playing it full VR-style.

With every creak and hiss piped in through headphones, and with the luxury of averting your eyes upon hearing the shriek that heralds your imminent, messy demise well and truly removed, it’s hard to describe my spin in the Roto as an enjoyable ride.

And did the Roto add anything? Absolutely. Despite taking a minute or so to adjust to effectively pivoting one’s entire body via the ankles, the Roto chipped away some of the artifice that comes with using a controller. Turning a corner in the chair actually felt like turning a real corner and who knew what would be lurking around it? 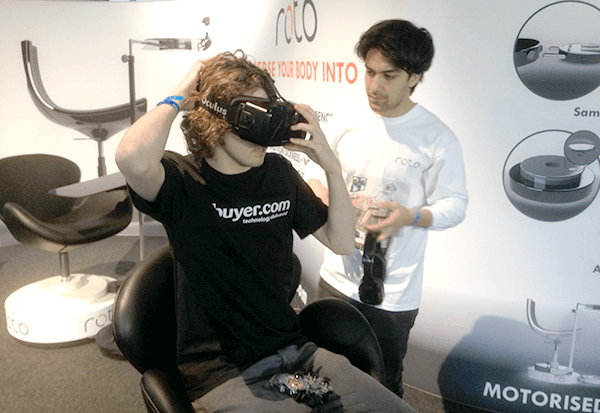 Spare pants at the ready

Tomb Much?
We found the second of our VR demos in the EGX’s Leftfield Room…and with good reason. The product of a University research project, Taphobos (a mash-up of the Greek words for ‘tomb’ and ‘fear’) is an experimental game that brings together the Oculus headset with a couple of players, a PC, a set of microphones and a desperate race against time. Oh, and an actual full-size coffin.

Reminiscent of that ‘Ryan Reynolds in a box’ classic, Buried, the aim of the game is for one player to explore an old cathedral and rescue their coffin-bound buddy. Whoever’s in the coffin receives clues via the Oculus and has to relay the prompts as they would if the two players were sharing a phone call. 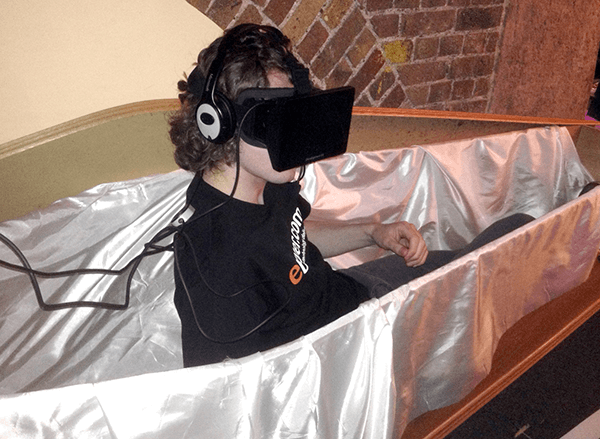 I managed to side-step the coffin role and proceeded to successfully navigate the ruined church, completing the rescue before my compatriot’s air supply ran out. Was it an interesting concept? Definitely. Would I ever want to recreate the experience at home, coffin and all? Probably not. But I guess that’s beside the point.

What Taphobos demonstrated was the scope of potential applications for VR beyond simply converting existing titles and franchises into VR-compatible formats. At this year’s Sundance Film Festival, for example, the Oculus folks were on hand to discuss the future and importance of VR storytelling.

A few years down the line, imagine the impact VR could have on movies. Instead of blithely following a director’s orders and looking only at what they want to show you, how cool would it be to explore an unfolding narrative from your own perspective? It’s might be tough to get your head around, but there’s a good chance (once the design and processing tech catches up) that VR could revolutionise the entertainment industry, as well as other significant markets too.