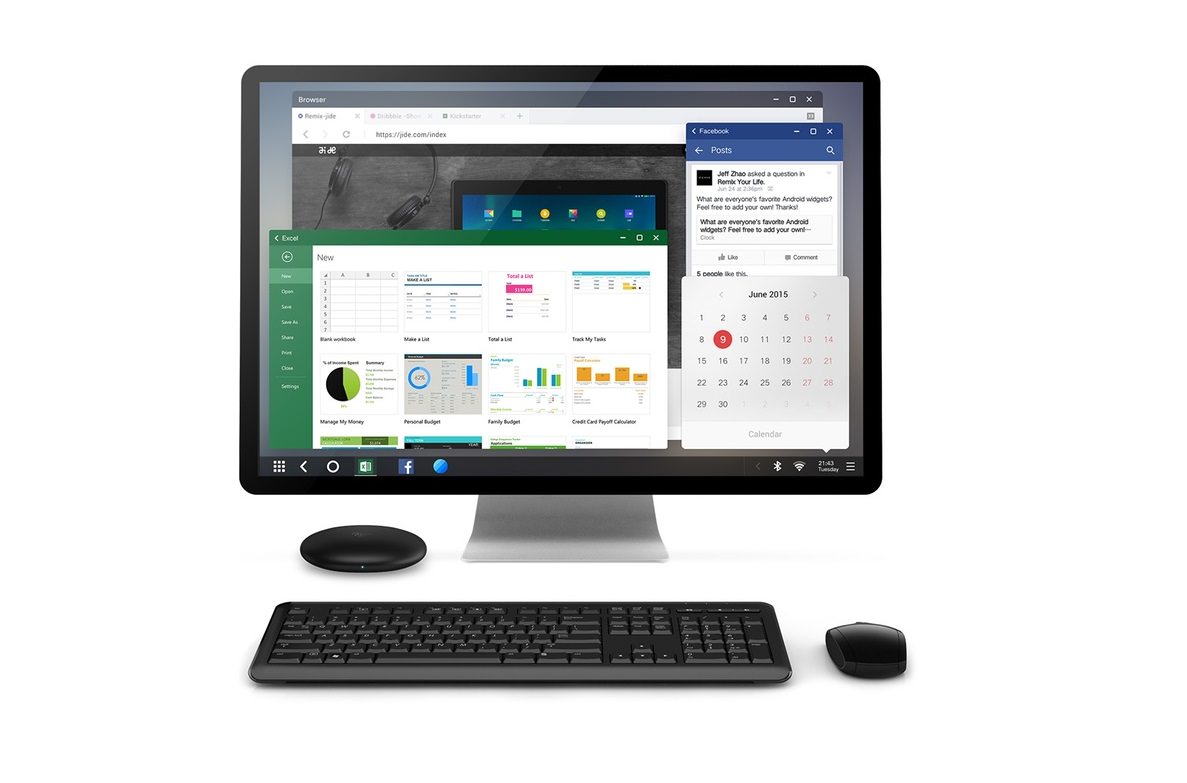 Small and compact desktop PCs are becoming ever-more fashionable in today’s industry. Kickstarter is no stranger to such projects, with one notable example named the Remix Mini.

Android Mobile on your PC

Built on top of Android Lollipop, Remix OS contains each and every one of the 1.5 million+ apps you get on your typical mobile Android devices, but adds a selection of desktop-friendly features for greater functionality. Remix OS comes with familiar features such as a taskbar and fully adjustable windowed apps. Plus, the OS is designed to be used with a keyboard and mouse. All the while, you’re able to take full advantage of an app-store awash with solutions to meet all your day-to-day needs. Remix OS takes Android and makes it a functional desktop experience.

The device itself looks largely similar to a large black pebble, probably only large enough to encompass an outstretched hand. Simple and minimal in design, the Remix Mini could sit comfortably under your monitor, saving considerable space and barely making the slightest remark as it goes about your business.

Inside you can plump for one of two specs. Both harbour a 1.2GHz ARM quad-core Cortex-A53 (64-bit) Allwinner processor, with the lower spec device coming with 8GB of eMMC storage and 1GB of RAM (double both those latter figures and you’ve got the spec of the higher tiered Remix mini). At the rear, the PC covers most of the bases you’ll need for day-to-day tasks. An Ethernet port doubles up your online connectivity options (Wi-Fi also available), two USB 2.0 slots are on board for your peripherals (although Bluetooth is also built in for wireless devices if you want to save on those precious ports) and connecting devices, and an HDMI slot will hook it up to pretty much any monitor worth its salt. There’s even a handy Micro-SD slot, expanding your storage opportunities and media-playing capabilities.

The project was launched on crowdfunding site Kickstarter on the 15th July, and the community has exploded in its support ever since. At the time of writing, almost 18,000 backers have contributed to an ever-growing pot of $1.3 million, smashing their paltry target of $50,000 (£32,000). Such was the success of their first back in March this year, Jide have been busy readying their second Kickstarter campaign. The Remix Ultra Tablet is essentially the same Remix OS, but this time built into a Surface-esque Android tablet PC. Raising over $210,000, the Ultra Tablet laid the foundation for its current position in some online UK retailers, and now the creation of their second product.

As mentioned in the opening paragraph, the form factor of PCs is becoming ever smaller, with shrunk down categories such as nettop PCs and “PC-on-a-stick” swelling in the amount of products available on the market. Consumers who are after a simple system for basic tasks and media consumption are increasing. Devices such as the Remix Mini are great as an alternative to a smart-TV device, or as a second PC. That they come with such a modest appearance, and seemingly modest price tags to match, only further sweetens the deal.

The Remix Mini ticks all the above boxes, although one must come with a small asterisk. The device is only currently available for pre-order via Kickstarter, to be shipped from China by October 2015. The device currently sits at $30 or $50 (between £19 and £32) depending on which spec you settle for. But given the $20 shipping cost lumped on top for delivery to the UK, you might be better off keeping an eye on the Remix Mini and waiting for its inevitable stocking in online retailers.

Social Media and Burglary
Social Snooping on the increase
To Top