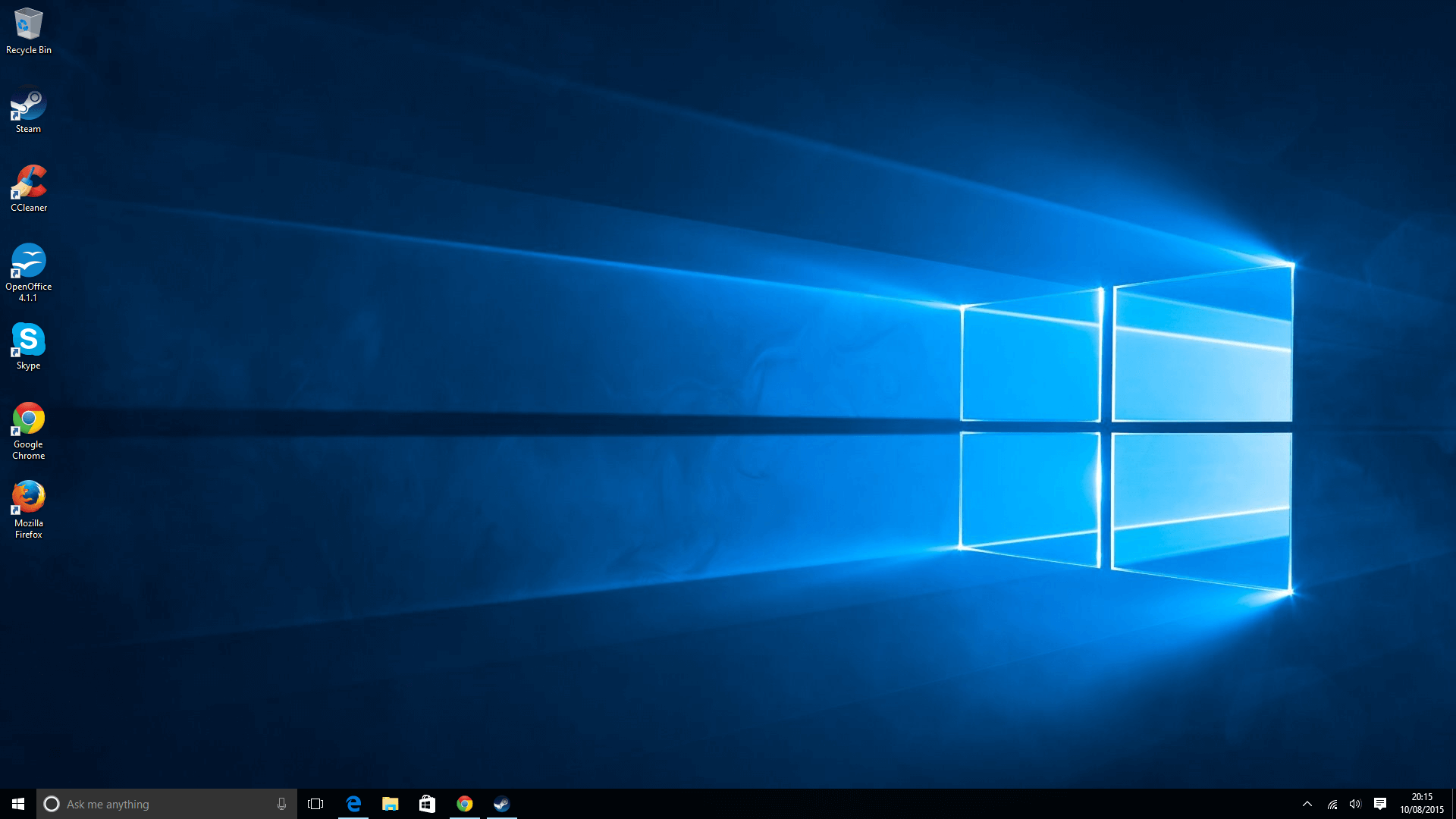 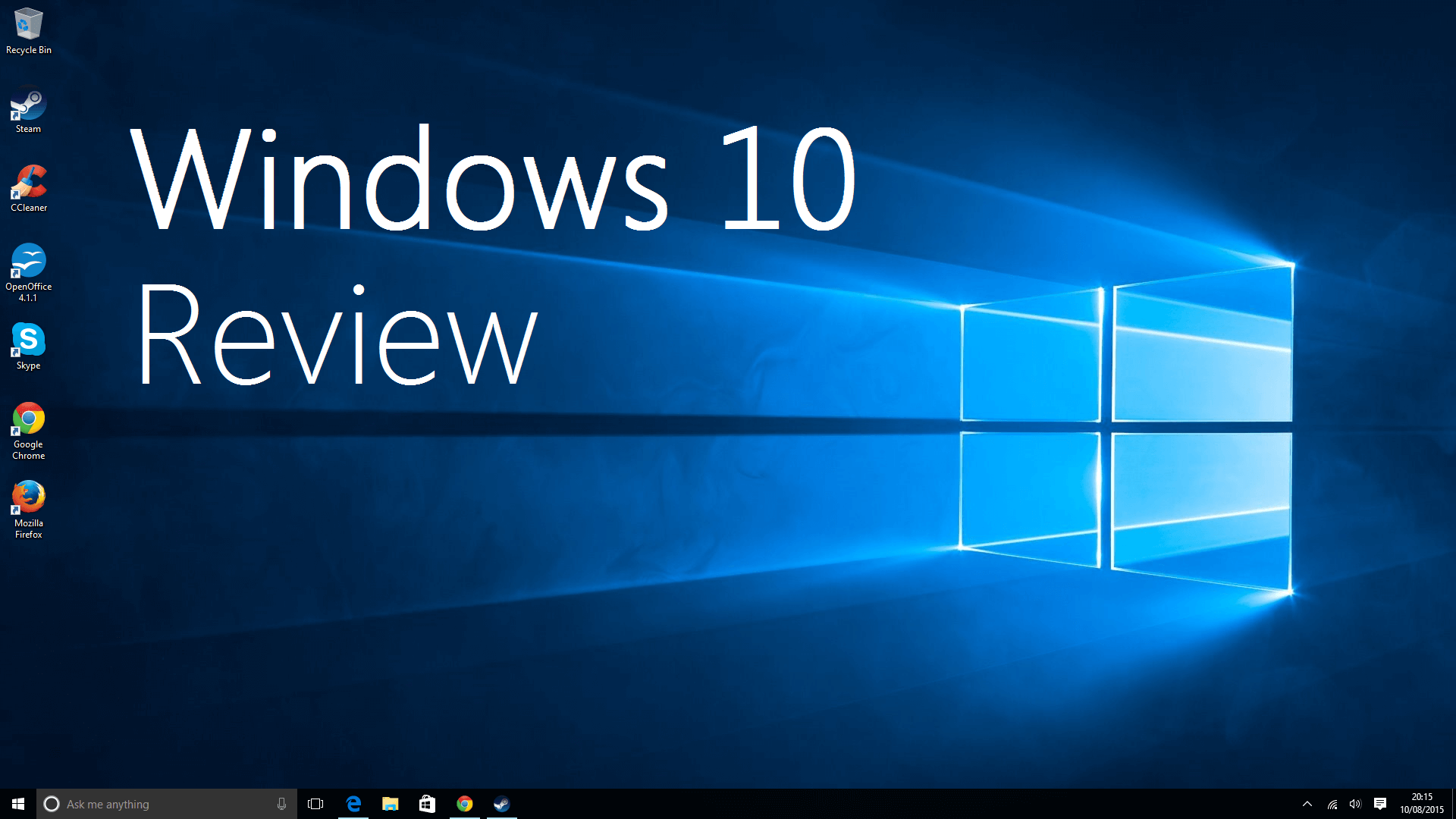 Microsoft dropped a huge ball with Windows 8. Misreading the future of the industry and taking the much loved OS in completely the wrong direction, its failure has piled significant pressure onto its successor.

Windows 10 is do-or-die for Microsoft, and thankfully, they appear to have recaptured their mojo.

Take one look at the Windows 10 homepage, and you’re more than likely to be reminded of one thing- Windows 7. In Windows 10, Microsoft have largely returned to the roots of much of their success, reinstating the tried and tested interface of Windows 7, and adding a number of handy features on top. 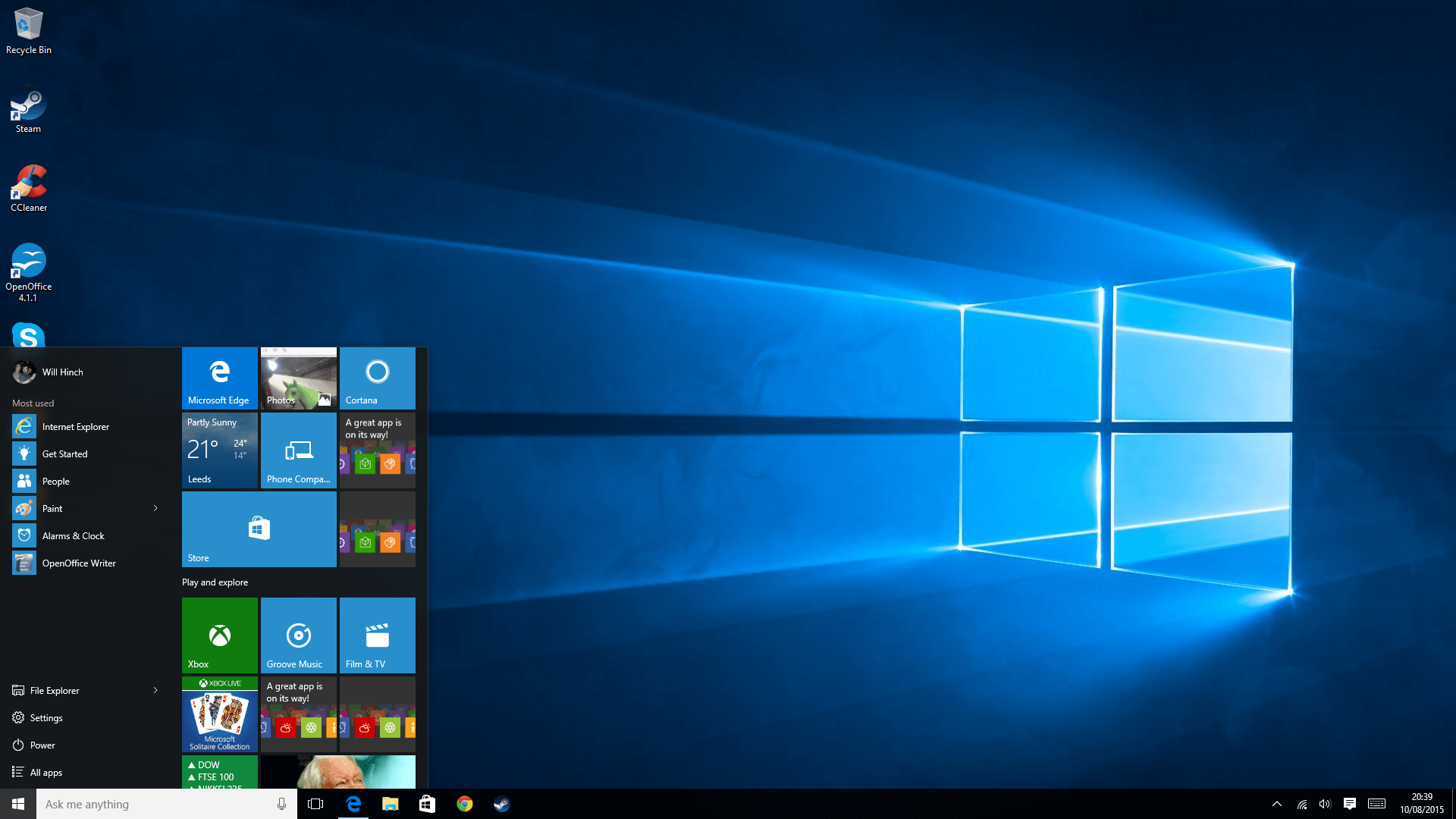 Fans of Windows 7 will slide into Windows 10 like a pair of trusty old trainers. The Start Menu has made its true return (after a botch job in Windows 8.1), and it now holds the primary nod to Windows 8. Open it up, and the Start Menu resemble a sort of Windows 8-lite, featuring the tile based app system. Thankfully, its much less intrusive in Windows 10, with search tools, task bars and app-lists much easier to access if that’s how you prefer to operate. I found that placing my most used apps, such as Netflix, Weather and News, along the top was the easiest way to make the most of the tile system without either over-relying on it, or ignoring it completely.

Another glaringly poor feature from Windows 8, the charm bar, has also had its marching orders for Windows 10. In its place stands the Action Centre, the one stop interface for all your basic tasks. Alongside the new home for all your notifications (as a side point, notifications have taken a major backseat in Windows 10), the Action Centre is a simple bridge towards connectivity, settings and even VPNs. The AC is easy to access, non-intrusive and simple. It’s a good addition. 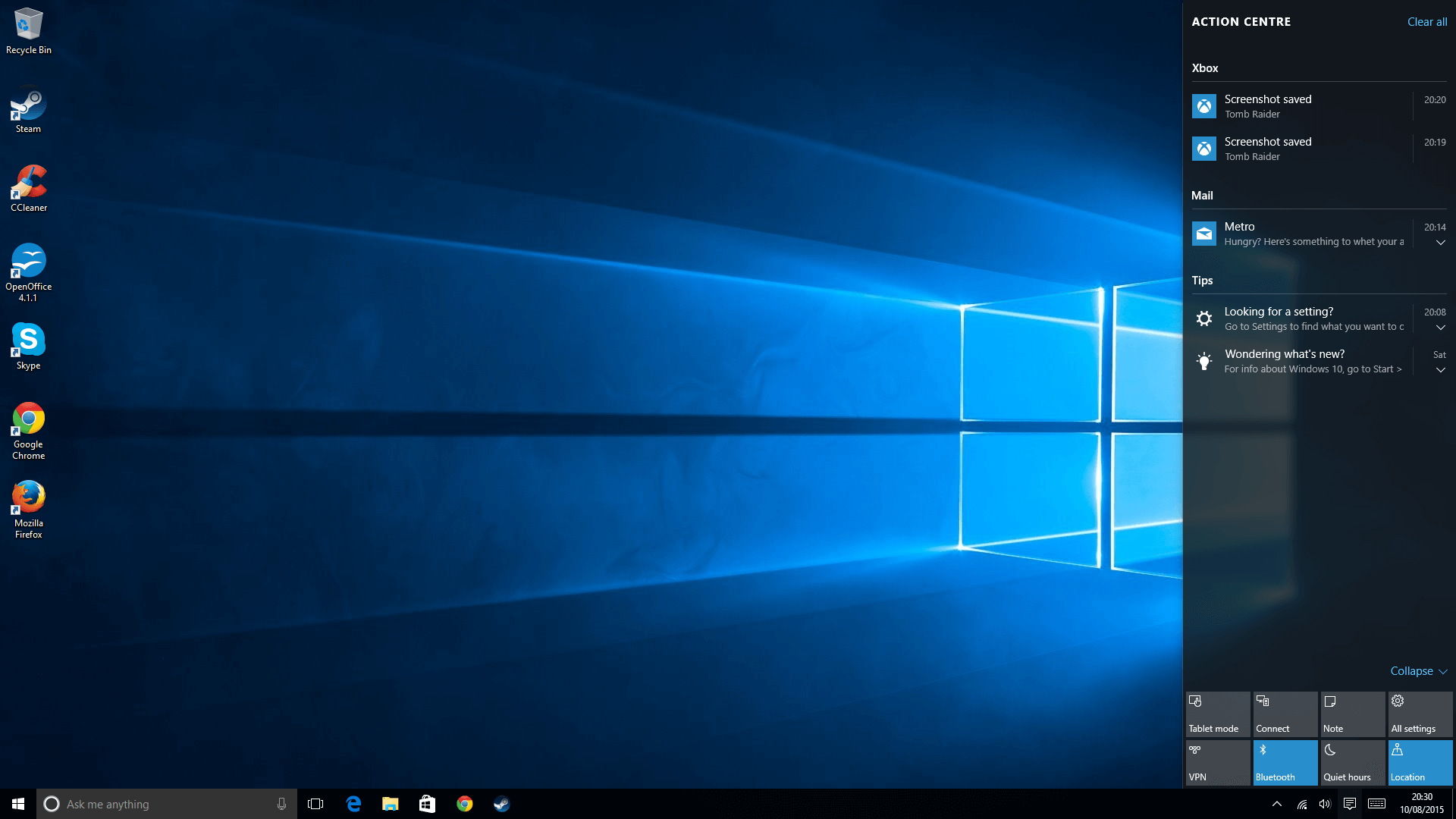 All of which adds up to a much more logical means of navigation around the interface. Gone are the stuffy and confusing methods in Windows 8, and in comes simplicity. Microsoft have also fiddled around with stalwart features such as file explorer and settings, but for the better. File explorer looks almost identical to what it has always looked like, but the addition of a “Recent files” drop-down menu adds an extra layer of functionality. The Settings app is now a true alternative to the control panel, housing all your everyday settings such as personalisation, accounts and system settings.

Windows 10 does have a couple of other productivity-enhancing features built into the interface, which they’ve suitably poached from other popular Operating Systems. Multi-app view organises all your running apps into a clean and simple perspective, and virtual desktops allow you to run several different tasks at once. These may seem familiar to users of other well-known OS’s, but there long overdue addition still brings an extra layer of sophistication to Windows 10. 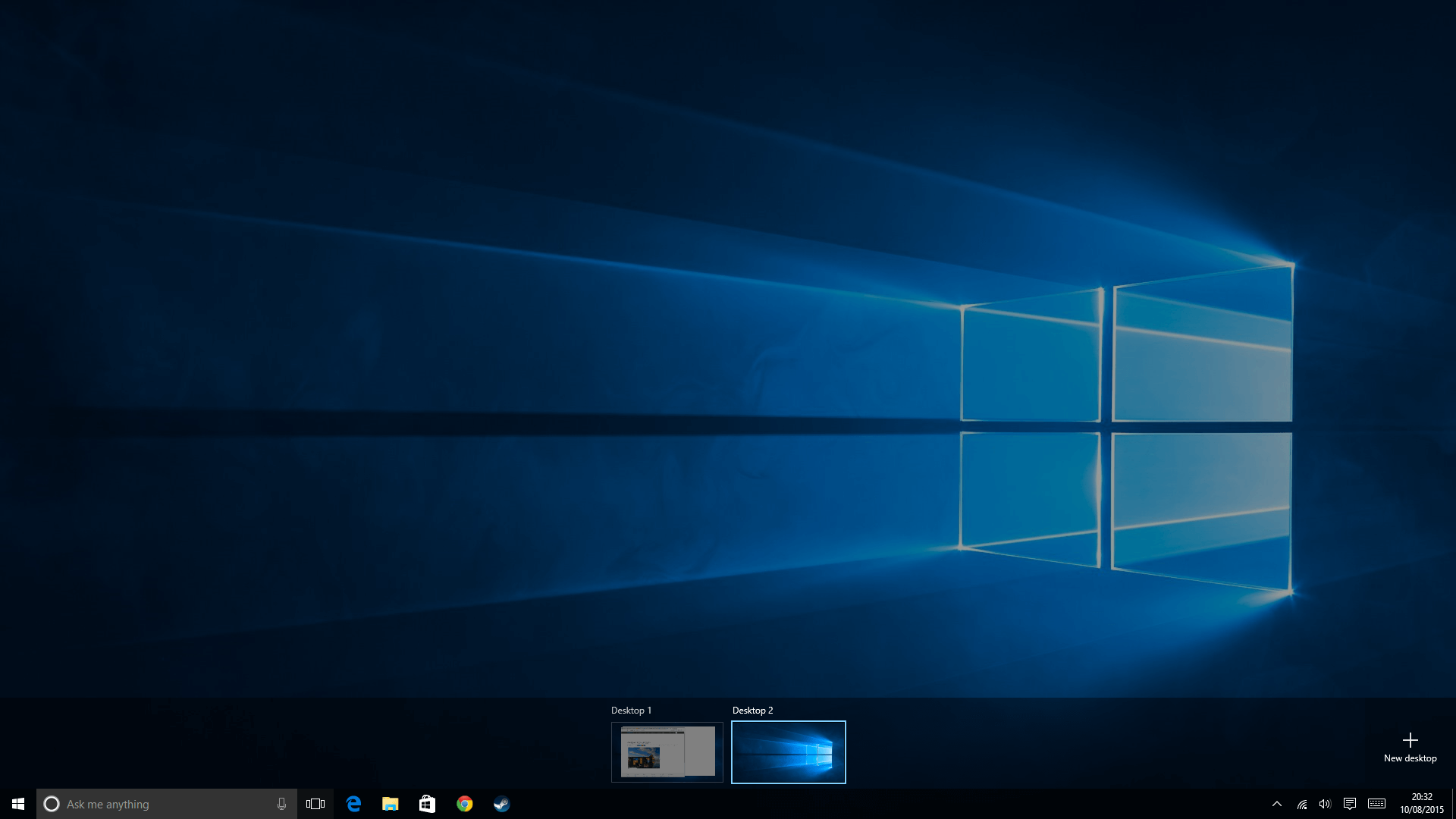 For fans of Windows 8 (they exist, right?), then there isn’t all that much to get excited about. Tablet mode will be your greatest saviour. Available in the Action Centre, it transforms the interface to resemble the old metro Start Menu of Windows 8, and puts apps in full-screen mode as standard. As the title suggests, it’s great for tablet users, but it’s unlikely to be touched by those on desktop. 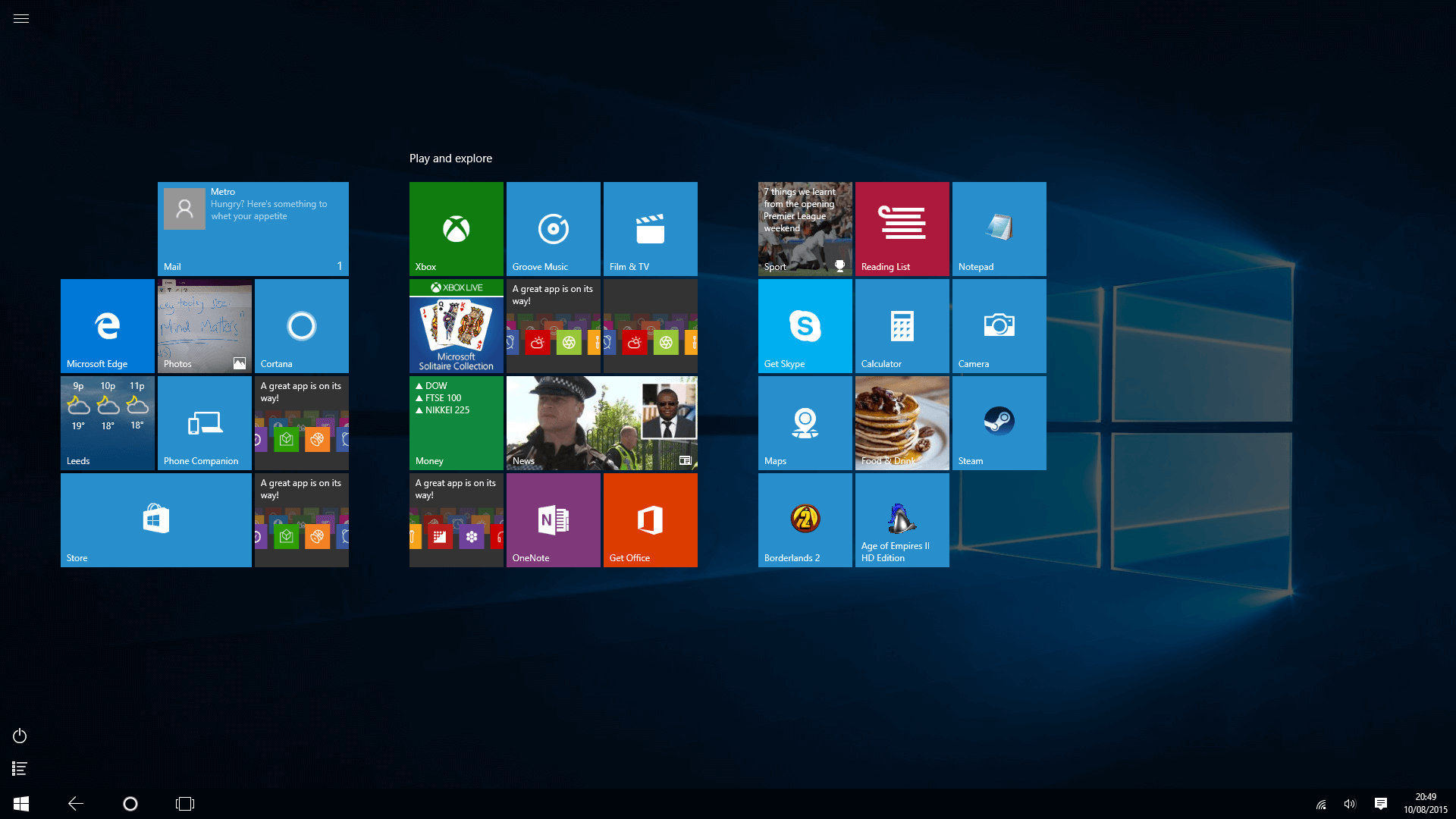 A collective rejoice rung around Windows fans when Microsoft announced the overhaul of their oft ridiculed web browser, Internet Explorer. And all the early signs suggest Microsoft have finally ticked a long awaited box in their search for an OS utopia. Much like the general interface, Windows 10 has plumped for simplicity in their web browser, but Edge still offers a number of interesting tweaks. 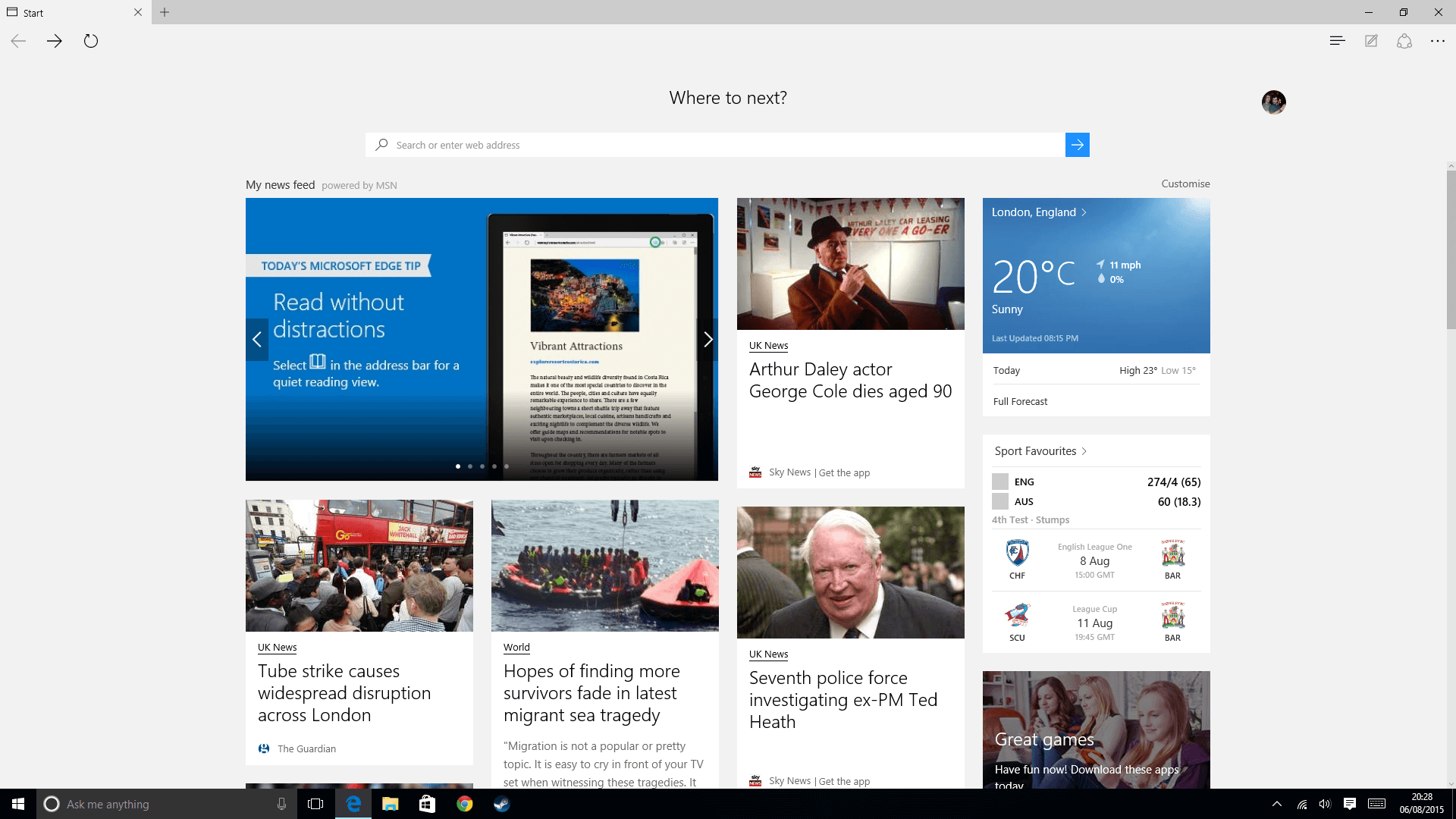 The interface is lean, clean and simple. The homepage offers you a collection of content tailored for you, such as weather, news articles and sports results. The uncluttered feel is married with super-fast browsing, and really does position itself well for those who want to quickly and efficiently peruse around the web.

Reading View only adds to Edge’s suitability for simple browsing. Stripping down the interface of any intrusive adds for a simple reading platform, Reading View works particularly well on tablet (although I noticed a number of publishers did not support the feature). 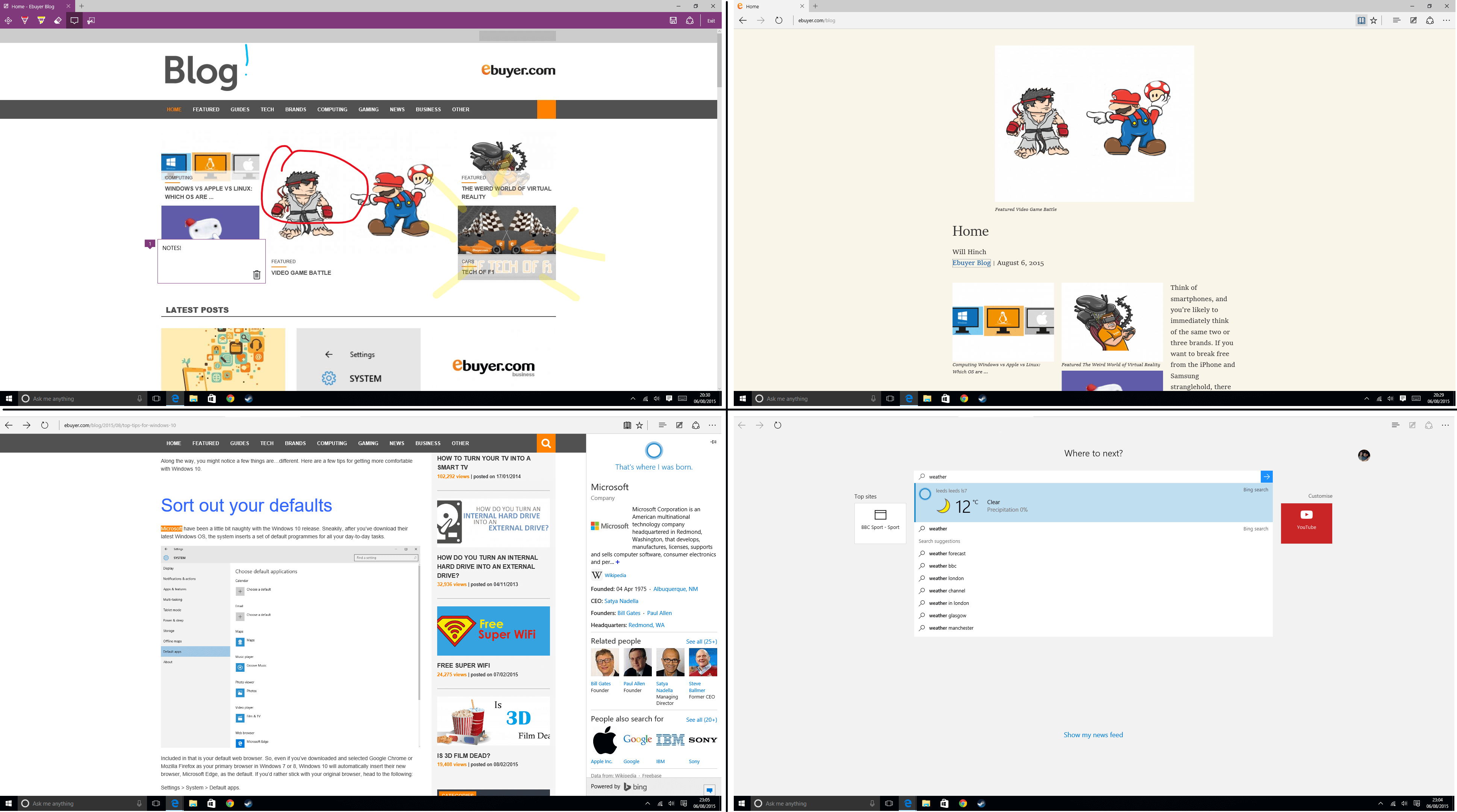 One feature I was impressed with is the drawing tools Edge makes available for you to scrawl various annotations on webpages. For someone like myself, with the artistic skill of a five year old, it wasn’t quite used as it was intended (see my efforts above, click on the image for an enlarged view). Still, it could be a useful for collaborative work, with the ability to send annotated webpages via email, and then pick them back up as fully functioning pages (rather than just screenshots) when they are sent back. It might prove useful if you’re making an online purchase with a second party, who you could then pass notes back and forth with, for example.

Another feature incorporated into Edge is Cortana, Microsoft’s virtual assistant. Throughout your dealings with Windows 10, Cortana sits next to the Start Menu in your taskbar, (unless you choose to switch her off). The search bar is often your go-too tool for finding stuff, and its shift to the task bar (from its previous home in the Start Menu or Charm Bar) is a welcome one. 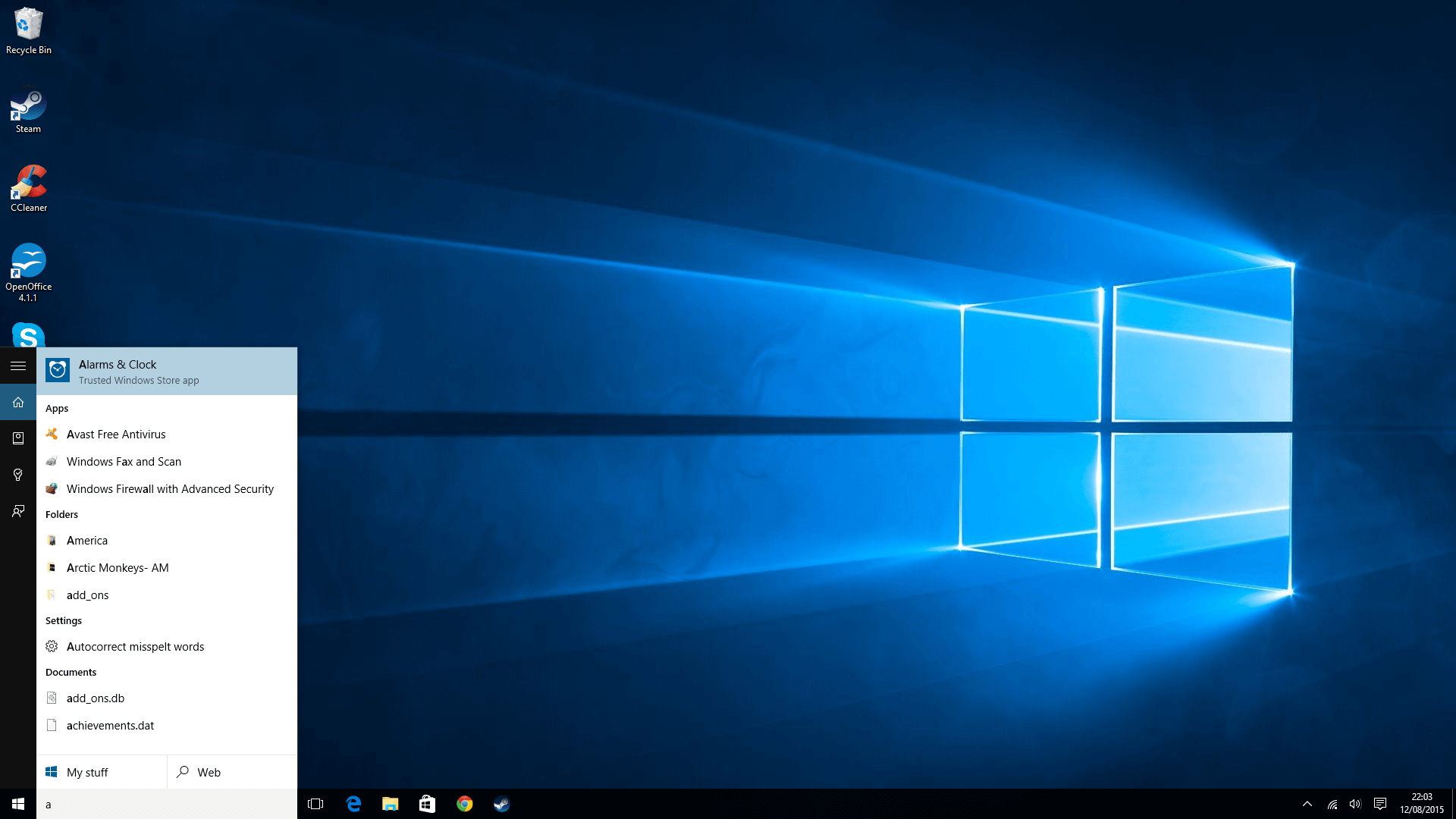 Search will inspect both the web and your folders when you type any text into it. Say for example you search for “Holiday”. You’ll be presented with any files that include that word in them, or you can choose to search Bing for them.

Cortana works best when completing general tasks. Open the Search bar, and you’ll find content such as the weather and any upcoming appointments. Ask her a question, and Cortana lifts information from the web in order to answer it. So, if you want to know what the who Brad Pitt is, the answer will be presented in the non-intrusive, yet expanded, search box.

As mentioned above, Cortana is also at your beck and call when using Edge. You can highlight any line of text, right click, and ask Cortana to do for a search for it. And again, the results are carried out quickly, but don’t intrude on what you’re currently browsing. A panel is opened up on the right hand side of your tab, providing a breakdown of the text you searched for. Cortana also interjects when using search. I began typing “weather” for example, and Cortana used my location to give me a basic rundown of the current weather where I live. 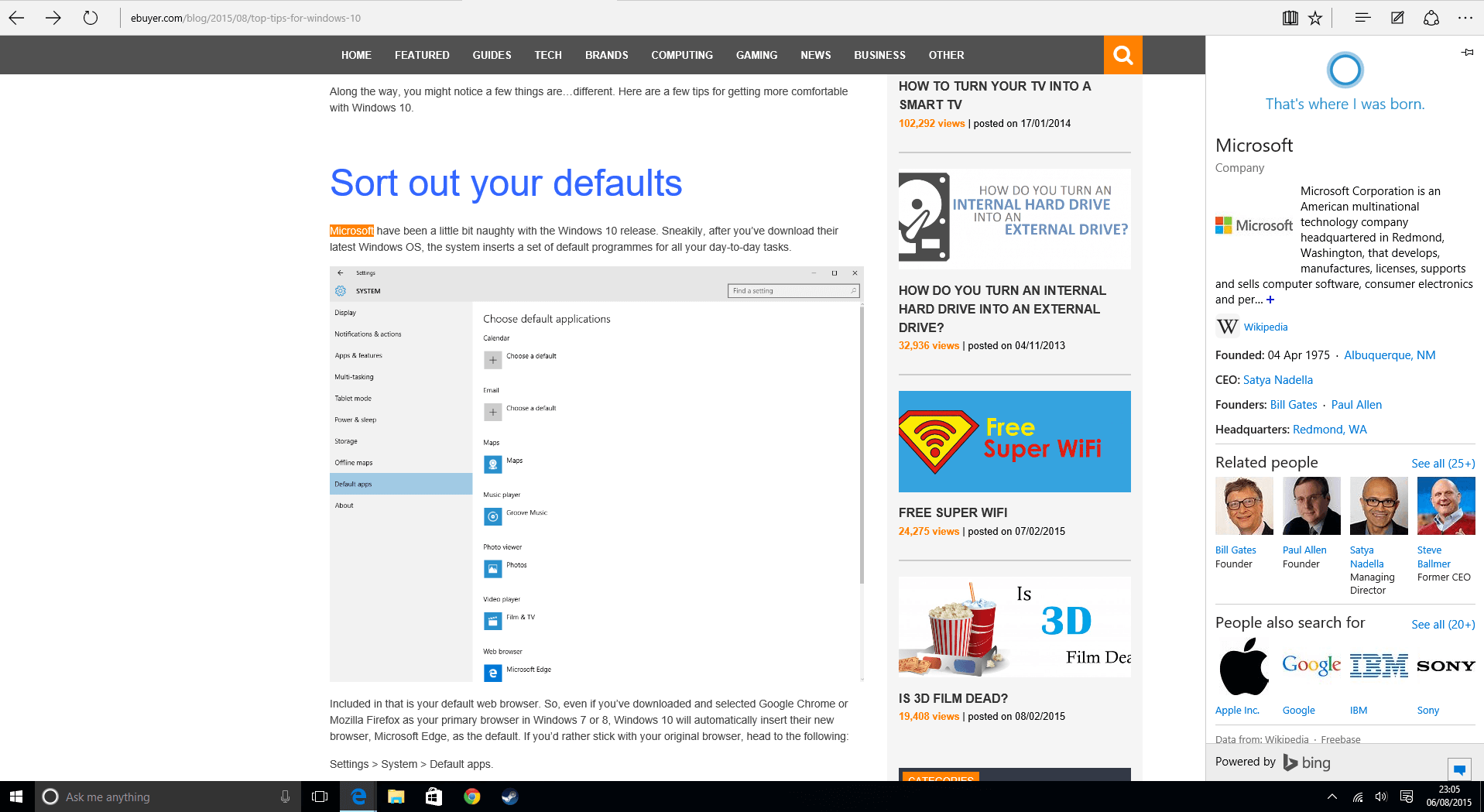 The jury is still a little out on Cortana. The feature works well, even if it does currently lack the sophistication to go beyond basic weather updates or web searches. It remains to be seen whether it can become a staple feature of the OS, or merely a throw-away novelty that has little real-life application. For now, it’s a tentative thumbs up.

The way Apps were presented required genuine change from previous Windows versions. And thankfully, Microsoft have abandoned the Windows 8 method of dividing apps into separate Windows and squishing down the main interface. All apps now appear in a Window which can be adjusted and manipulated around the screen at your leisure. Snapping windows into position has now been extended from two to four, and apps respond quickly to any readjustments without damaging functionality. 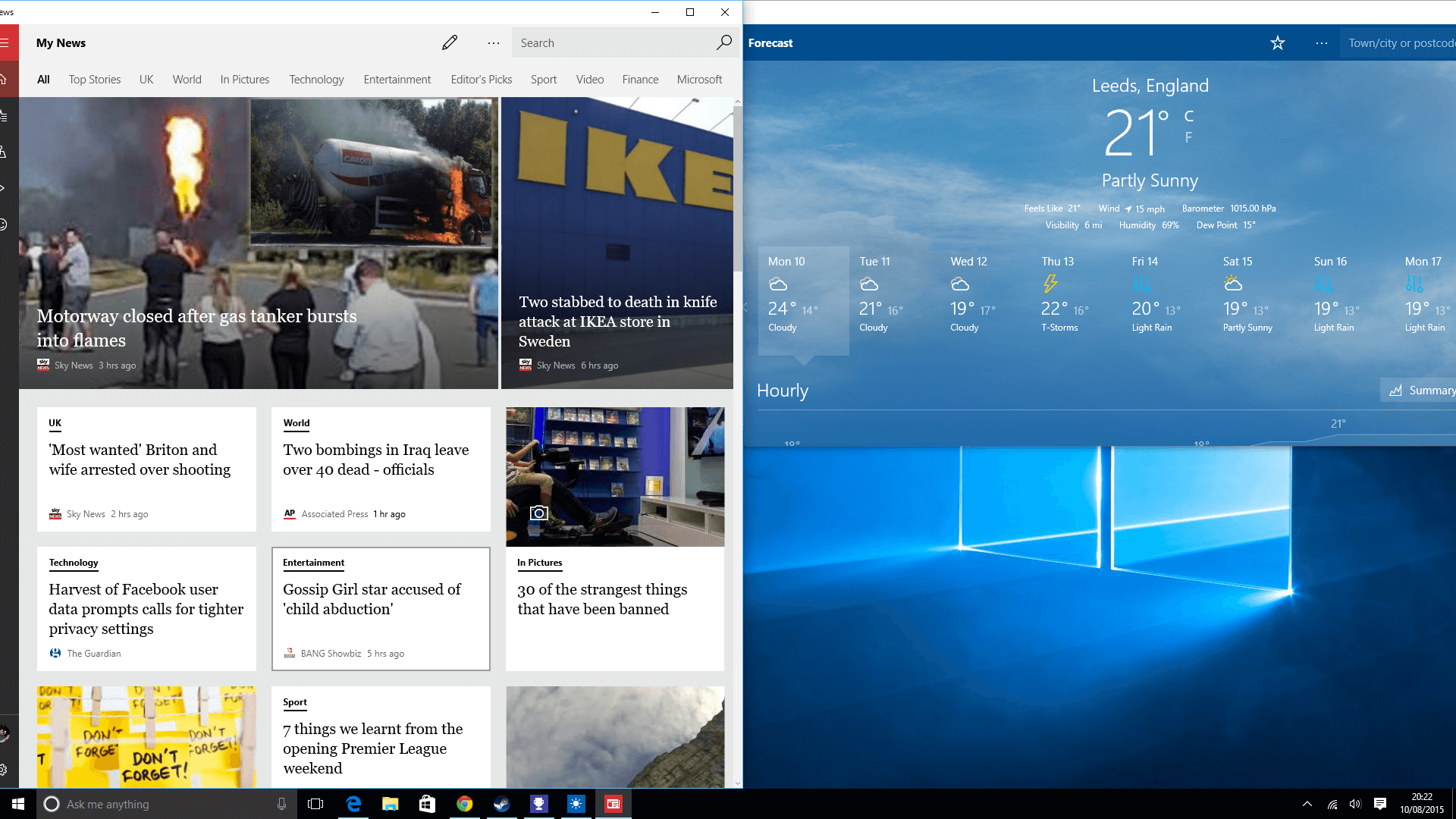 Microsoft’s built in apps look and feel much more the part than they ever were in Windows 8, and it leaves you more likely to reach for the on board apps rather than just going via a web browser. Mail is a perfect example, and it now rivals that of Microsoft’s other platform, Outlook. The News and Sport apps also remain a great hub for all your tailored content.

Whilst a number of Windows apps are handy, others you’ll no doubt use once and then discard. Groove Music for example, Microsoft’s reinvented Music platform taking over from Xbox Music, is fine if you’ve got tracks on your OneDrive account or Hard Drive. And the same goes for the TV & Film app for video. Aside from being steady media players however, they are purely vehicles for selling content via their respective stores. It’s unlikely to draw many away from popular media management software.

The App store itself has had a little bit of an overhaul, and now looks more attractive and less confusing. Of the handful of independent apps I tried out, results were fair.

Included in which was gaming. Microsoft are pumping greater resources into gaming with Windows 10, and it shows with a series of gamer-friendly features right out the box. The revamped Xbox app allows you to hook it up to an Xbox One and stream to any Windows 10 device, and the app itself contains a bucket load of content on all the games you enjoy.

In game, Windows 10 now allows you to capture various moments. Take a screenshot, capture the last 30 seconds of gameplay or record at your own leisure with the new “Game Bar”. Those with an Xbox One that they’d like to use in two locations in the house will no doubt appreciate these features, but its potential use to the rest of us may lie with the availability of games. If Microsoft’s support for PC gaming extends to porting over their big Xbox titles ala Gear of War and the upcoming Quantum Break, then Windows could become a forceful platform in gaming. Handily, I noticed the Game Bar also works with Steam, as in the image below of me on Tomb Raider. 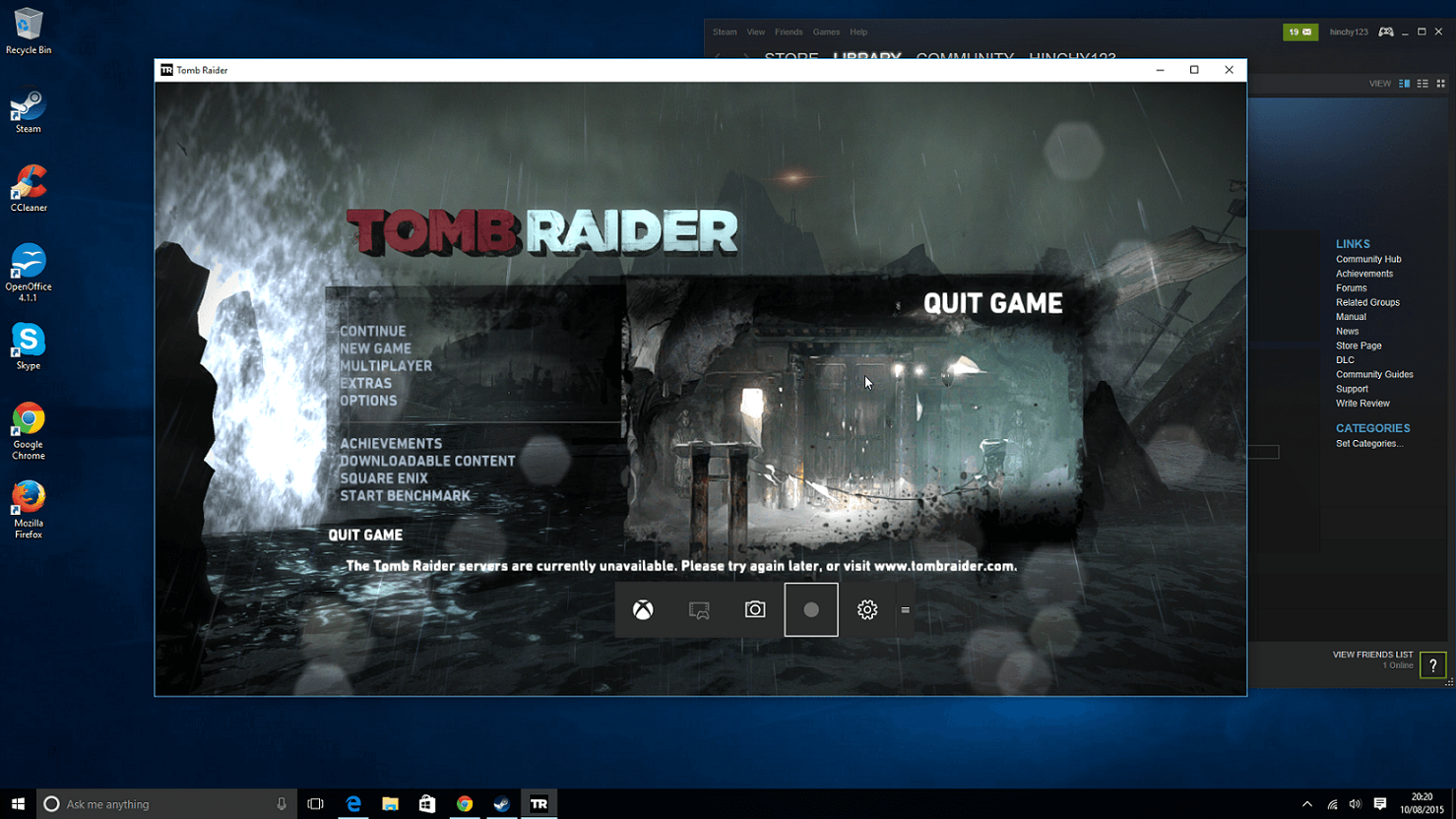 The Elephant in the Room

This much more stripped down attitude to apps, adjusting them to fit the nature of desktop computing, seems more appropriate than the centre stage Windows 8 wished to thrust them into. Microsoft banked on the approval of app-developers to make their app store competitive, and its failure to do so underpinned its demise. The promise of universal apps, working on any device from desktop to mobile via Xbox, is a crucial pawn in winning over the Windows 8 nay-sayers and getting everyone onto Windows 10. Microsoft seem to have done the ground work, but developing a scarce app-store is now in hands of independent developers.

The potential success of Windows 10 could revolve largely around the point raised above. If the Windows store can develop into a vibrant and innovative platform teeming with apps that work across devices, it could make not only relaunch the Windows desktop brand, but finally kickstart their mobile platform too.

That’s not to say you shouldn’t go ahead and download Windows 10 regardless. For me, only the most die-hard fans of Windows 7 or 8 need keep to stay put. Windows 10 is what Windows 8 should have been, staying true to a successful formula but pulling off a series of slight tweaks. Sure, some obvious stability issues exist, and this has led to occasional crashing of things like the task bar and Cortana. But with an entire year in the bank to upgrade for free, you could be patient and hang on a few months until the remaining bugs are ironed out.

Once that is sorted however, Windows 10 just might be the best version yet.

If you have no means to access Windows 10, head to ebuyer.com for desktops, laptops and tablets that come with a free upgrade to Windows 10, using our guide to upgrading. Alternatively, grab a copy of Windows 10 and install in on your existing system.