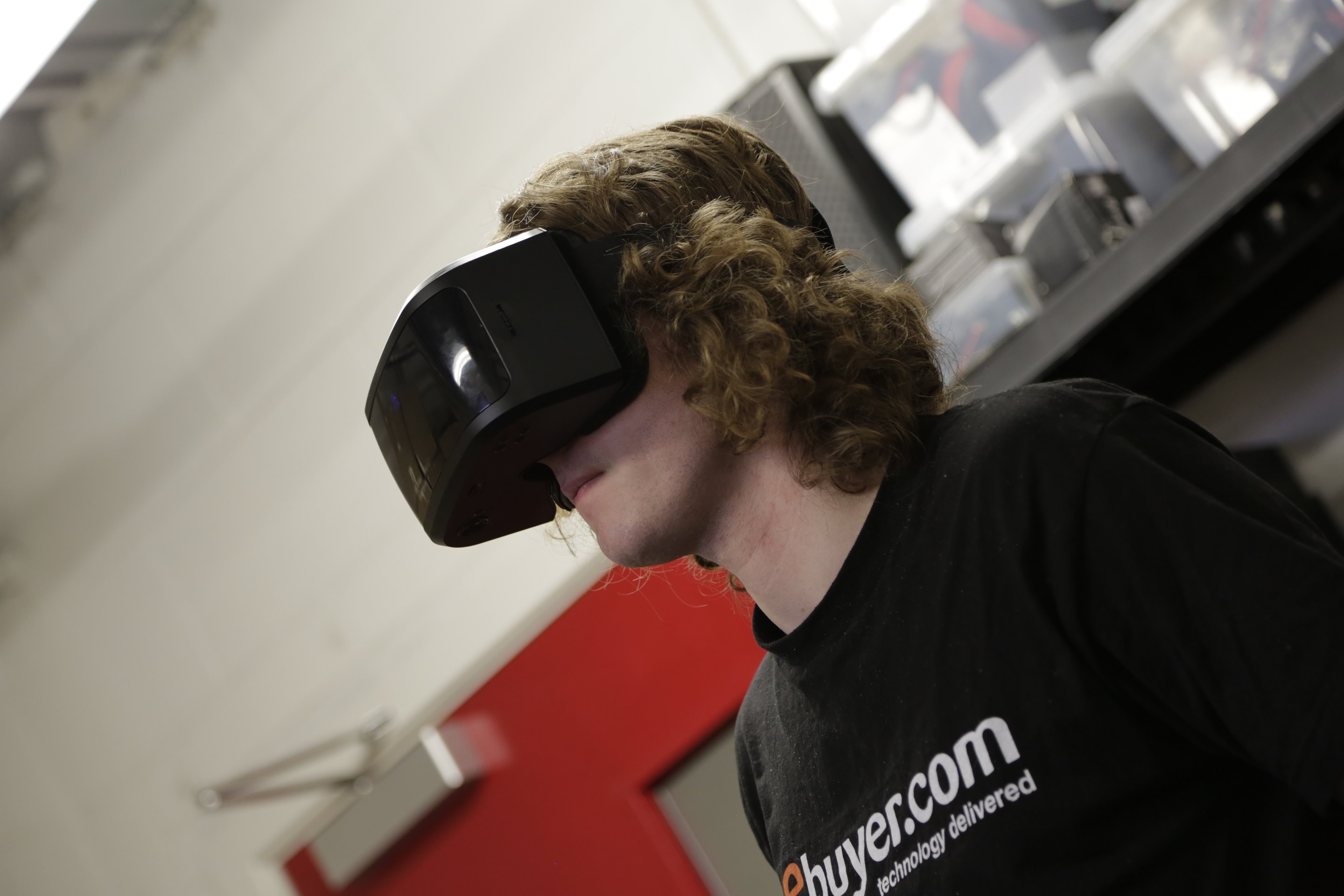 The Virtual Reality market is simmering away slowly, yet to really launch into the entertainment powerhouse many have promised it will one day become. A contributing factor currently holding back VR is that each of the devices that have been announced or released fall into one of two categories.

There is the yet to me released top-end of the market that will likely dominate the market (i.e. Oculus Rift, HTC Vive), or the glorified bits of plastic or cardboard where your smartphone does the hard work (Samsung Gear VR, Google Cardboard).

Enter AuraVisor, a tech start-up based in York. They have designed a VR headset that forges out a path seemingly all to itself. AuraVisor offers a completely wireless VR experience, and doesn’t require you to slot in a smartphone. All the components you need are built straight into the headset itself, leaving you a completely self-contained, all-in-one VR headset that’s ready to go straight out of the box. Essentially then, AuraVisor has its own Mini-PC built into the headset, and a number of buttons suspended on the bottom on the visor allow you to navigate around the user-interface, which is built on top of Android.

To power the device, you’ll find a 1.8GHz quad-core Rockchip RK3288, a processor found in portable devices like tablets and some PC-on-a-Stick entries. Alongside it, the AuraVisor has Wi-Fi, Bluetooth and 16GB of storage, but that is expandable to 64GB using the SD card slot. The five inch display renders an impressive 1080p per eye and, crucially, the rechargeable battery lasts for 5 hours. The device also comes bundled with a Bluetooth controller and together with some headphones connected via the 3.5mm jack or Bluetooth, the AuraVisor can deliver on gaming and media viewing.

The device is currently ploughing through a successful crowdfunding campaign on Kickstarter. For pledgers on the campaign, you could initially grab an AuraVisor for as little as £135 on the super early bird. With those rewards quickly snaffled however, you’re looking at paying nearer the £300 MSRP when the AuraVisor receives a wider distribution.

We headed off to meet James Talbot, the man behind the AuraVisor, in his VR lair in York (check out our video above). Having tried a number of other headsets and remaining sceptical over the development of the industry, I left suitably impressed. Firstly by the relative comfort the device afforded. I found AuraVisor lightweight and sturdy when suspended on my noggin’, a pleasing surprise given that all the hardware is built-in. Indeed only the positioning of your nose (which we were assured is a fault that is being worked on) provided any discomfort.

After adjusting the set to remove any blur, I had a quick blast taking down some zombies and swam around in shark-infested waters. If the nose problems can be solved, AuraVisor will be able to tick one major issue VR has grappled with to date; discomfort and weight of headsets meaning any VR session is unbearable after about 10 minutes.

Given the price and the platform of the AuraVisor, its biggest challenger in the emerging VR market is Samsung’s Gear VR, but AuraVisor do hold a number of clear advantages. The Gear suffers from having to purchase Samsung’s flagship phone to slot into the plastic headset you buy separately. That’s before you get to the practical issues of using devices like the Gear VR and LG VR viewer. Booting up a VR app only to receive a phone call off your mum does kind of ruin the experience, as does having to dismantle the headset every time you want to swap apps. 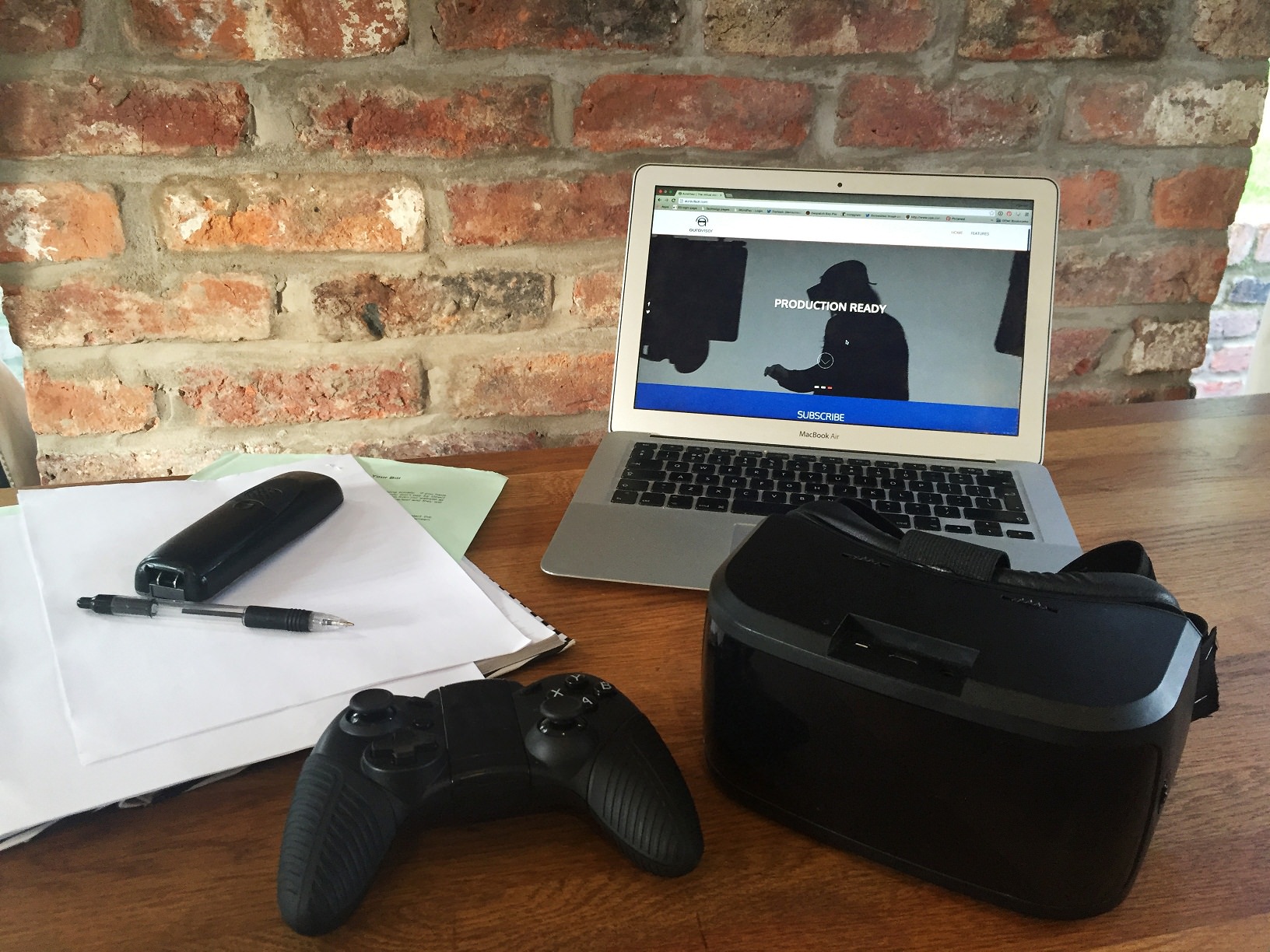 AuraVisor has been built as a VR headset from the ground-up. It’s a dedicated VR device, and has a set of components that are dedicated to powering VR apps, rather than a variety of apps running in the background. It may not harbour the power of the Oculus Rift or HTC Vive but, untethered and portable, it could provide the most functional VR experience at a more affordable price.

As with Virtual Reality in its entirety however, AuraVisor will live and die on one thing- content. Quality VR-tailored content is still sparse, but we were assured by James that he has had discussions with creatives who want to develop content for the device. Given the AuraVisor is a dedicated piece of hardware, content can be created specifically for it. With rivals such as Google Cardboard, content is built for any number of devices, making creating tailored content tricky.

When it comes to content, AuraVisor will certainly be presented with a challenge when the competition is predicted to hot up next year. They don’t possess a wallet the size of Facebook or Valve, and Samsung have struck up a deal with Oculus to provide a digital store teeming with content.

A significant challenge lies ahead for the David amongst these VR Goliaths. Can James and his AuraVisor team persuade enough people to part with £300 for a new piece of tech? Bear in mind they’re pitching the device at consumers that aren’t entirely bought into the idea of VR, otherwise you’d invest in the Oculus or HTC Vive. Secondly, given the breakneck speeds tech industries develop at, can the AuraVisor and its very mobile set of specs remain current? One plus side to Google Cardboard or the Oculus Rift is that, if you need more power, you can just upgrade your smartphone or PC’s components. Not so with AuraVisor.

Questions that ultimately we won’t get answers to until April, when James is confident they’ll be shipping.

PC in your Pocket
What is LiFi?
To Top