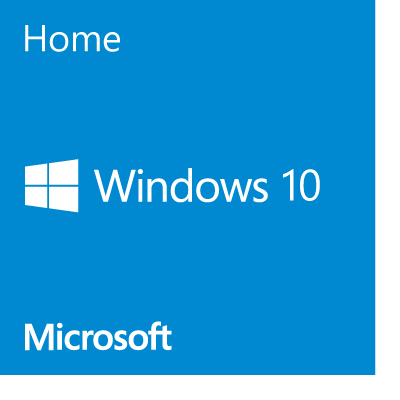 Are you still running Windows 8 or earlier? Perhaps you’re comfortable with your good old operating system and aren’t accustom to change or, like many of us, worry that updating your OS might lose your data and leave you staring bewildered at an unfamiliar, alien interface.

Rest assured this is not the case, Windows 10 has a familiar feel and various features that add to its easability of use. As for data, a simple manual backup prior to upgrade will ensure for every eventuality.

With the OS market rapidly changing, now is the time to upgrade.

How is the Windows OS market changing?

Windows 10 is the latest version of Microsoft’s flagship operating system, following on from Windows 8 which was released in August, 2012. Windows 10 was initially offered free-of-charge to members of the public who wished to upgrade, however this update window closed July 29th last year. Since then, it has been available to buy online in two versions, Windows 10 Home or Windows 10 Pro. The free upgrade window has however been extended for users of assistive touch technologies.

Apparently, Microsoft chose to jump straight from Windows 8 to 10 (missing out 9) to suggest discontinuity with earlier versions. 10 was, and is, a new chapter in the history of Windows.

Windows 8 made the controversial move of eliminating the Start menu and opting instead for a separate Start screen. Although this Start screen did offer several benefits, many users will be glad to hear that the Start menu is back in Windows 10, incorporating live tiles within. 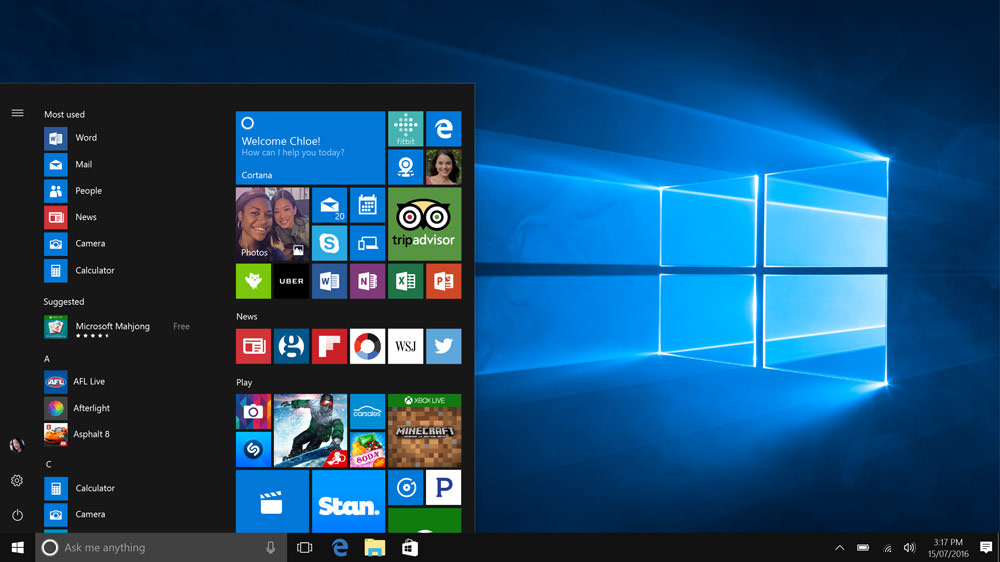 Microsoft has built its own personal voice assistant, Cortana, to sit within the Start menu. She allows you to perform web searches for quick answers by simply pressing the Windows key and typing a question. She can also be used to set reminders or add calendar events if you sign in with your Microsoft account. 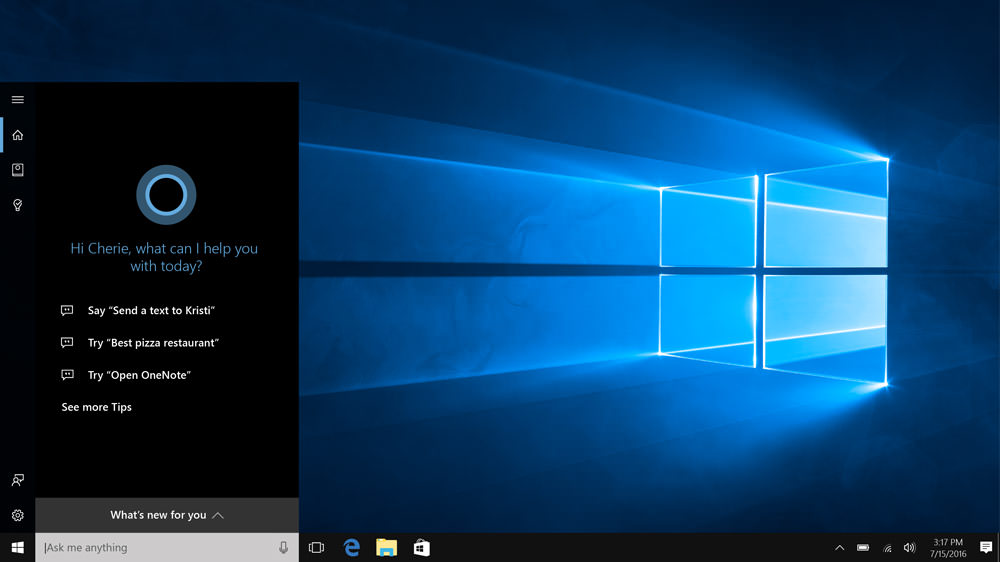 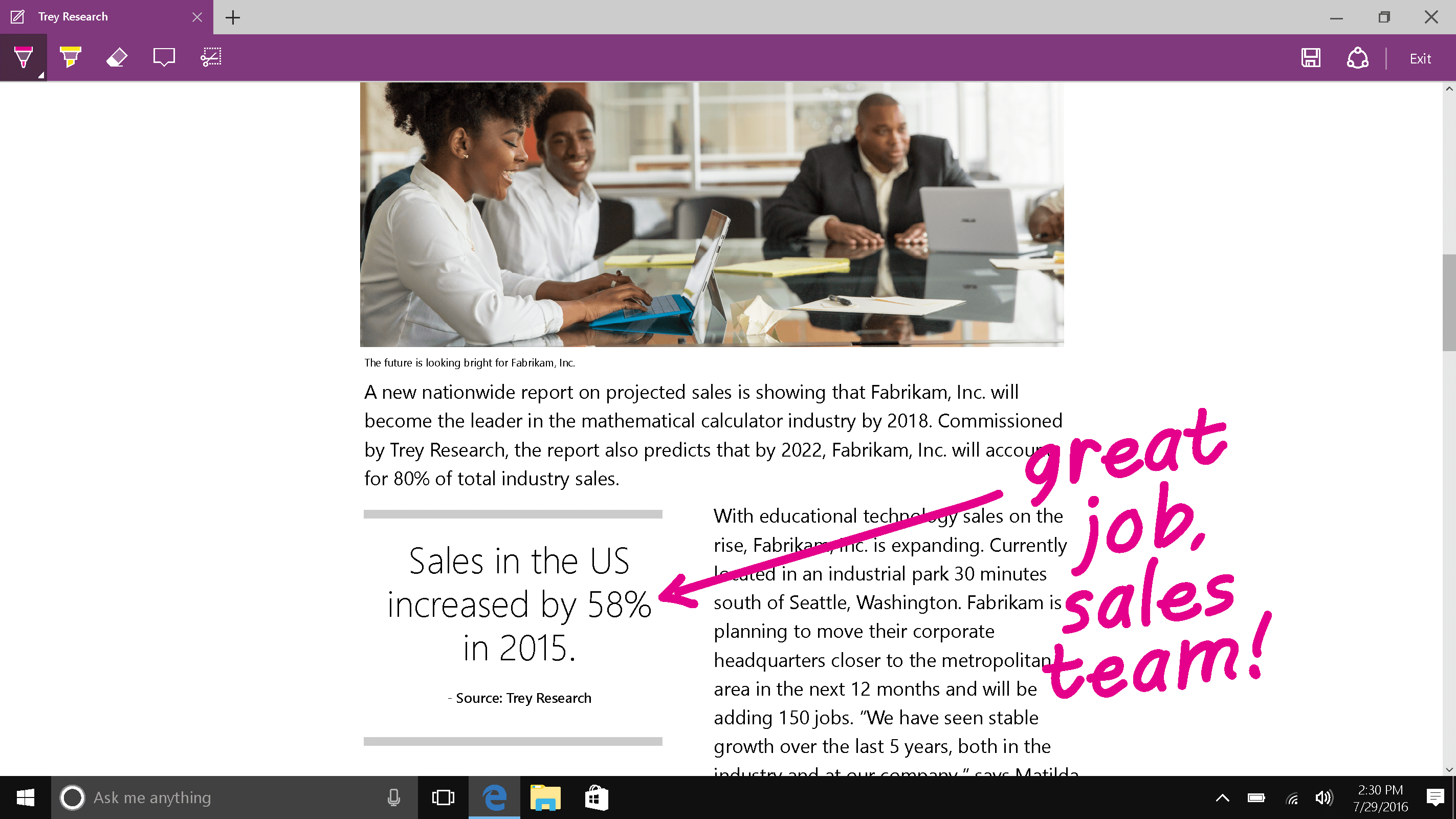 Microsoft has added a central notification area to Windows 10. You can click the notification tray icon in the lower-right side of the screen or press Win-A to open it up. Here, many system notification show and you can access links to various useful features like the Windows 10 Settings app, VPN settings and quick toggles for things like location and Quiet mode. There’s also a button to switch quickly between desktop and tablet modes. 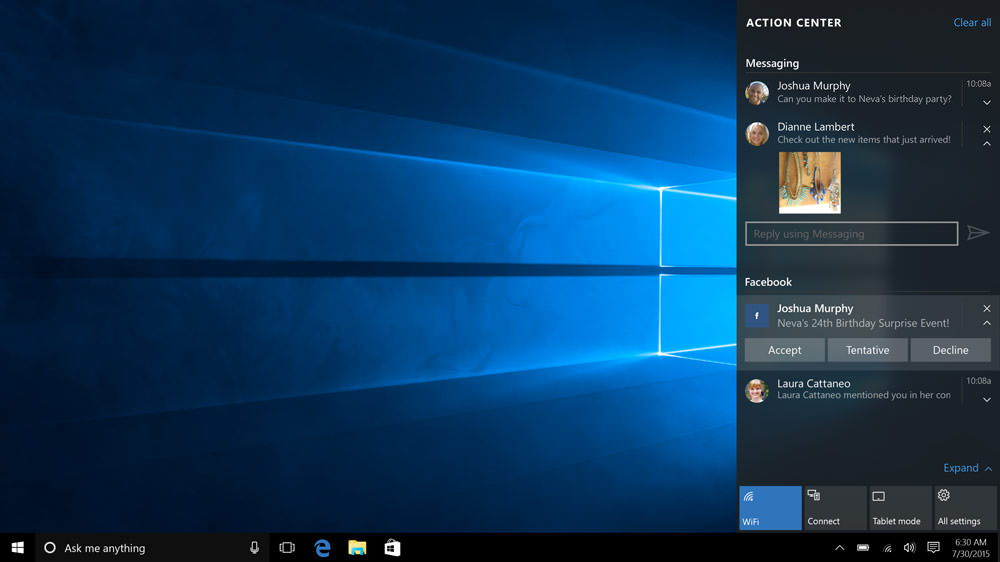 In Windows 10, Microsoft has added the ability to create and manage multiple desktops. You can add new desktops, quickly move windows between them, and jump between desktops by pressing Win-Tab. 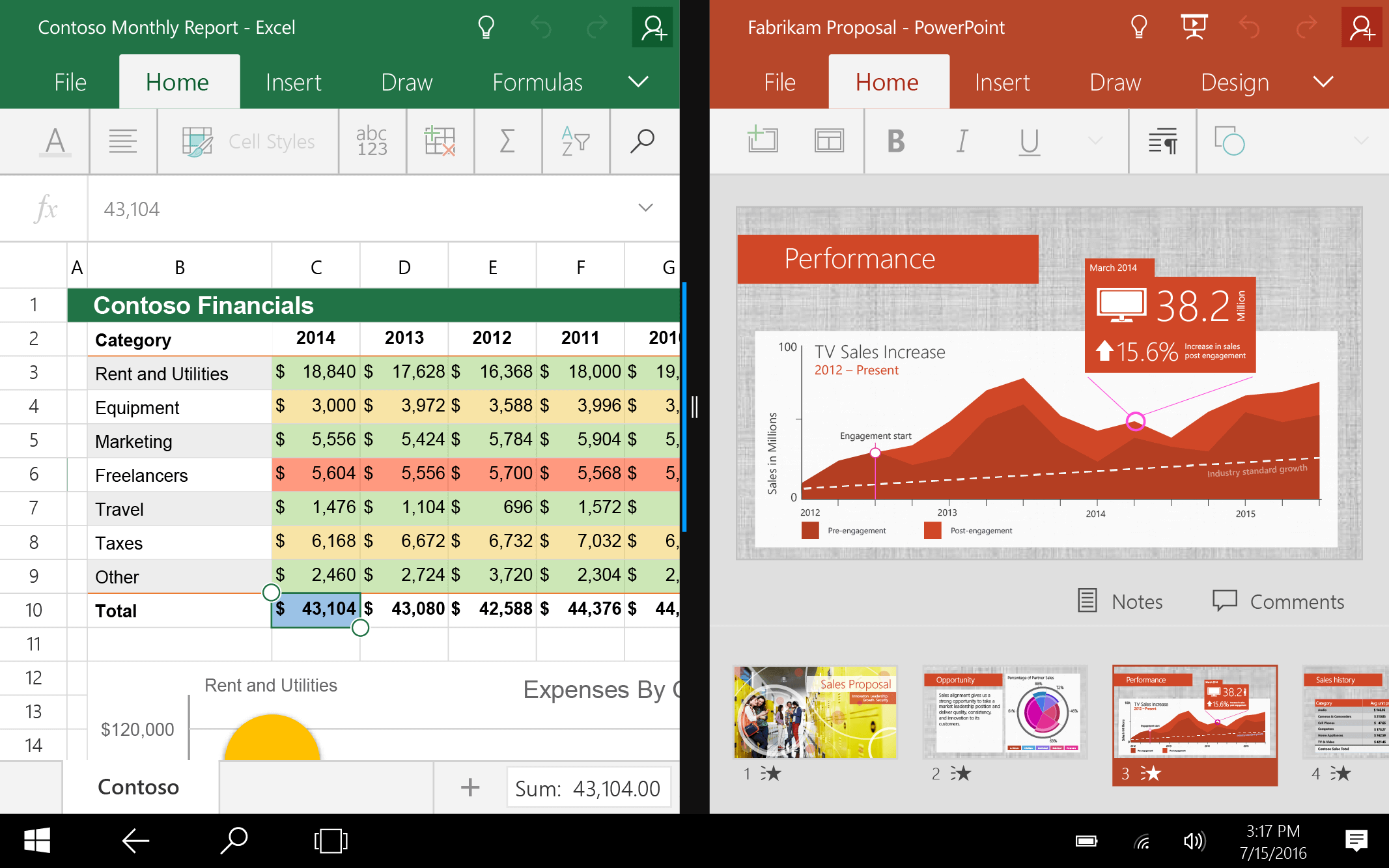 Continuum allows for alternative touch/desktop modes, dependent on the device you are using:

With Windows 8, a lot of customers complained that Microsoft had tried too hard to make desktops behave like tablets; customers found this to take away from the usefulness of the operating system. In 10, Continuum and Universal Apps bridge the gap between touch and desktop devices. If you have a tablet or touchscreen, you can now enable a touch mode to make your device behave like a tablet. If you add a keyboard and mouse, you can switch to desktop mode. At the same time, Microsoft is championing the creation of ‘universal’ developer apps that automatically adjust to touchscreens when necessary.

As explained previously, users of Windows 10 will benefit from biyearly updates. The first of these updates, the Anniversary update, was rolled out in August this year. It saw improvements and updates to Windows Ink and Cortana. More desktop apps and games available in the Windows Store. A plethora of new theme options, and Microsoft Edge began supporting browser extensions, pinned tabs and web notifications – among various other updates such as those to Windows Hello, Defender, Skype etc.

As of April 11th, the next big update, the Creators Update, will be available. This new version is packed with new changes, such as:

The update will download and install automatically, however it might take a few weeks for all devices to get access as the update is planned to go progressively. if you can’t wait, you can try to prompt the upgrade by going to Start > Settings > Update & security > Windows Update > Check for updates. Another option is to download the Windows 10 ISO on April 11th via the Media Creation Tool and upgrade that way.

Gaming and SSDs
Social Networks: your privacy, explained
To Top