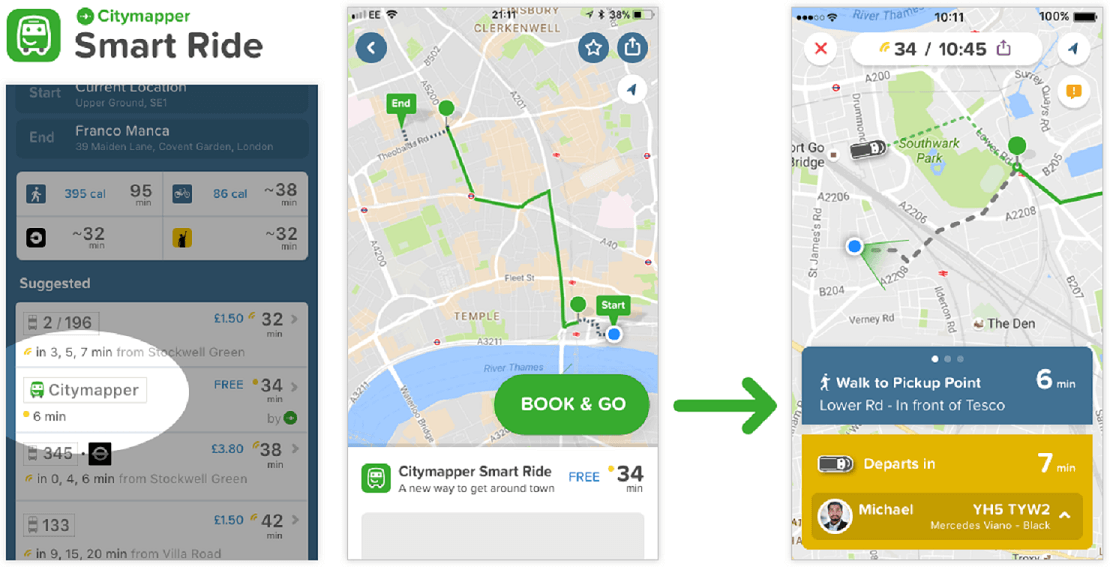 Citymapper Smart Ride has shared new details on its plans to “reinvent shared transportation” by launching a hybrid service that is part bus, part ride-hailing system.

Already live in the company’s app in London, Smart Ride is what the company calls its solution for dynamic shared transportation in cities, and has come about after the firm launched a trial bus service in the city last year.

The Smart Ride service operates like a combination of ride-hailing services such as Uber and Lyft – offering on-demand pick-ups via an app within the service’s dedicated area, but in shared transportation on a network – and a bus route.

The difference, Citymapper says, is that their bus network can adapt its route slightly within its operating area as demand changes throughout the day.

“Unlike traditional buses that are tied to a route, our vehicles are tied to a network and can thus move in multiple combinations,” the company wrote in a blog post.

“This means passengers can be taken all the way to the best spot for them on the network. Since it’s shared transportation, bus stops (pick-up stops) still exist, and are used to co-ordinate multiple passengers.”

Citymapper Smart Ride said its original bus trial told them the traditional bus network system was too rigid and restrictive and new responsive and adaptable models were needed in order for it to succeed.

To be more flexible in how it operates, Citymapper Smart Ride uses minivans smaller than the minibuses used on the initial trial to avoid restrictions that come into play for vehicles carrying nine or more passengers.

“Carry nine-plus people in London and you’re a bus and have to follow strict regulations on fixed routes, schedules, and service frequency,” Citymapper said in an earlier blog post.

That demand can be issued from within the Citymapper app, with users within the service’s catchment area able to book a spot on a bus and then meet it at a convenient pick-up point on the route.

The firm says its technology is “vehicle agnostic” and could be used by any multiple seat vehicle to create what it calls a responsive network, a system that the company believes could become the go-to shared transport model for cities in years to come.