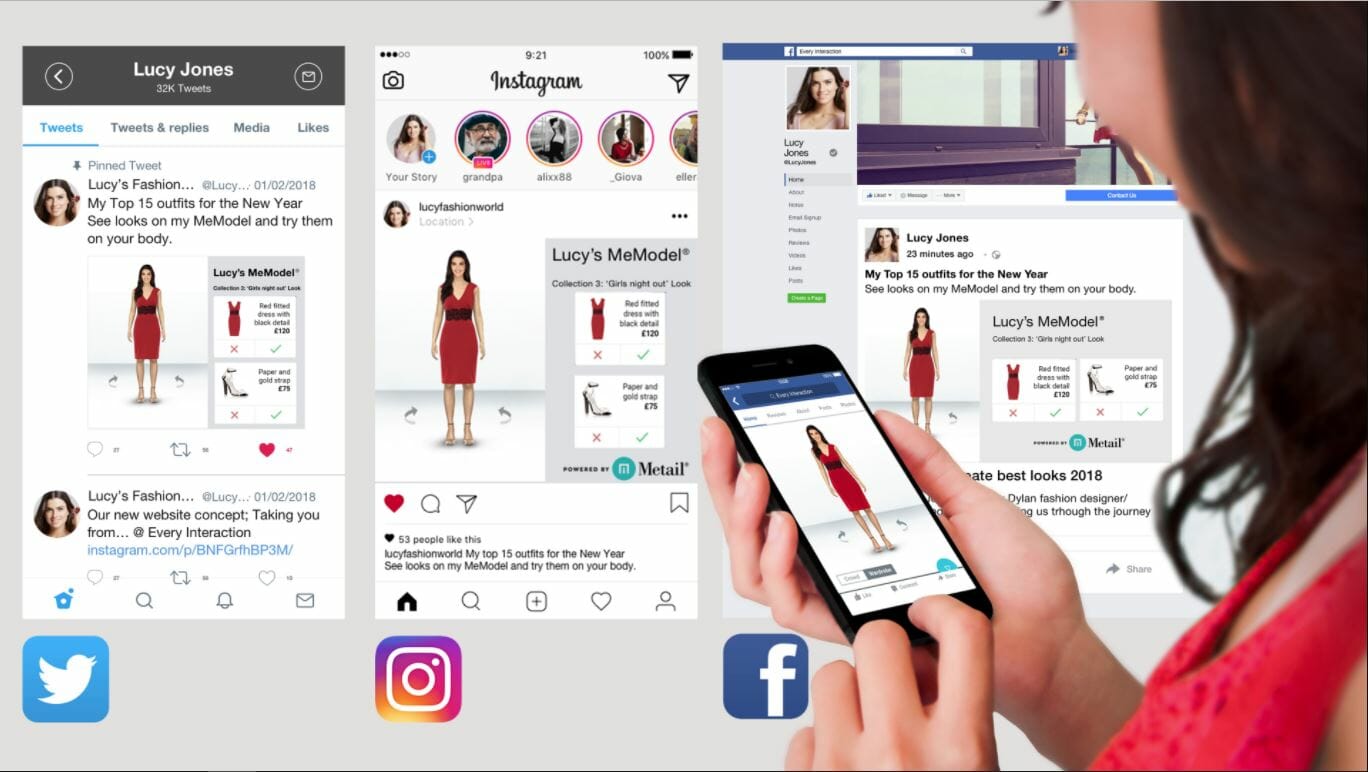 Retail start-up Metail has been granted a US patent to allow for the social sharing of 3D body models.

The British company allows customers to create 3D body modesl of themselves wearing potential outfits. Customers can then share 3D images of themselves with friends and followers.

The company’s aim is to make clothing fit for all body types, by creating a digital model for every body to try on, meaning customers can try clothes online before they buy them.

Founder and CEO of Metail Tom Adeyoola, said: “Technology is changing the traditional face of the fashion industry, from manufacturing to customer experience and I’m excited about the prospect of Metail’s central part in the next social phase in retail’s evolution.”

Metail, founded in 2008, claims their MeModels are 92-96% accurate to customers’ specific sizes after measurements are taken.

The Metail 3D body models aren’t the only new fashion technology on the block. Last year Clothcap was revealed. A fledgling technology which focuses on avatars that come in different body shapes and sizes.

It means you can see how the fabric moves on your “virtual body” before making that all-important decision to type in your credit card details. The technology uses motion capture to record 4D movies of people and 66 cameras and projectors to illuminate the person being scanned. Clothcap is being developed by researchers at the Max Planck Institute for Intelligent Systems

“This scanner captures every wrinkle of clothing at high resolution,” says Michael Black, director at MPI-IS.

“It is like having 66 eyes looking at a person from every possible angle.”

(MPI-IS)While there isn’t anything new about motion capture technology – it’s already being used in animation, gaming and biomechanics – the researchers say this is the first time effort has been made to capture clothing in motion, in detail, in a way that could help consumers and fashion retailers.

ClothCap works by calculating motion and body shape under the clothing while separating and tracking the garments on the body as it moves.

“Our approach is to scan a person wearing the garment, separate the clothing from the person, and then rendering it on top of a new person,” said Dr Gerard Pons-Moll, research scientist at MPI-IS.

“This process captures all the detail present in real clothing, including how it moves, which is hard to replicate with simulation.”

The scientists say ClothCap provides the “foundational technology” which can be built upon by retailers to create their own digital wardrobes.

“First, a retailer needs to scan a professional model in a variety of poses and clothing to create a digital wardrobe of clothing items” said Black.

“Then a user can select an item and visualise how it looks on their virtual avatar.”

But the researchers admit their current technology has several limitations, including the fact that wrinkles in clothing do not change with body shape, and there are still a range of body movements that haven’t been taken into account. They plan to address the issues in future work.

So Clothcap and 3D body models are still some way off but they will arrive soon enough to revolutionise online clothes shopping.