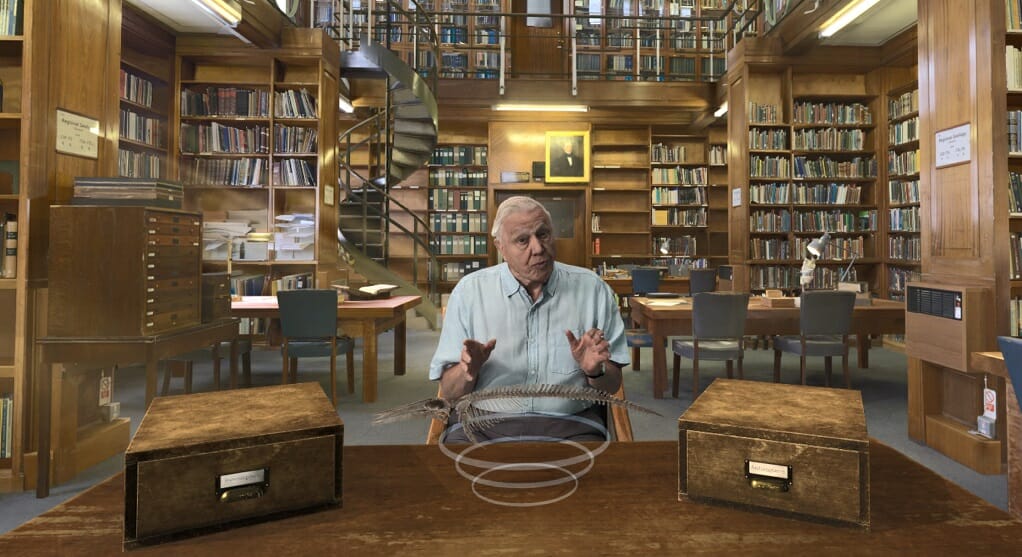 The interactive experience called Hold the World will be available in the spring. The Natural History Museum VR app stars David Attenborough. So what’s not to like?

Sky is set to launch a new virtual reality experience that will allow its customers to have a “one-on-one” audience with Sir David Attenborough in their living rooms.

The interactive experience – called Hold the World – lasts between 20 minutes and an hour and will be available this spring via the Sky VR app.

It is set at London’s Natural History Museum with Sir David acting as a tour guide in the form of a lifelike 3D hologram.

Users will be able to interact with rare artefacts and objects from the museum’s collection as they explore areas closed to the public.

They can pick up and enlarge objects such as a trilobite (fossil of an extinct arthropod) to examine in detail, with a virtual Sir David imparting his expert knowledge as he sits opposite the participant.

Other featured items in Hold The World include a blue whale, a stegosaurus, a dragonfly, a butterfly and a pterosaur.

Viewers can choose from various locations in the museum such as the Conservation Centre, the Earth Sciences Library and the Cryptogamic Herbarium.

More than 100 cameras were used to film Sir David and the footage was used to digitally recreate the broadcaster and naturalist in VR.

The museum’s CT scanning department worked with scientists and animation teams to create the specimens used in the natural History Museum VR app.

Sir David said: “Sharing my passion for the natural world is something I have done for many years through different technologies, from the days of black-and-white TV to colour, HD, 3D, 4K and now virtual reality.

“Hold the World is an extraordinary next step in how we can communicate and educate people about experiences they wouldn’t usually have access to in the real world.

“I am delighted about what users can learn and discover from the Natural History Museum’s treasures in this new VR experience – it really is one of the most convincing and bewitching experiences that the world of technology has yet produced.”

The new Natural History Museum VR app coincides with the relaunch of the Sky Virtual Reality app which will see a new piece of content released each month.

Click here to see the full range of VR headsets available from Ebuyer.com