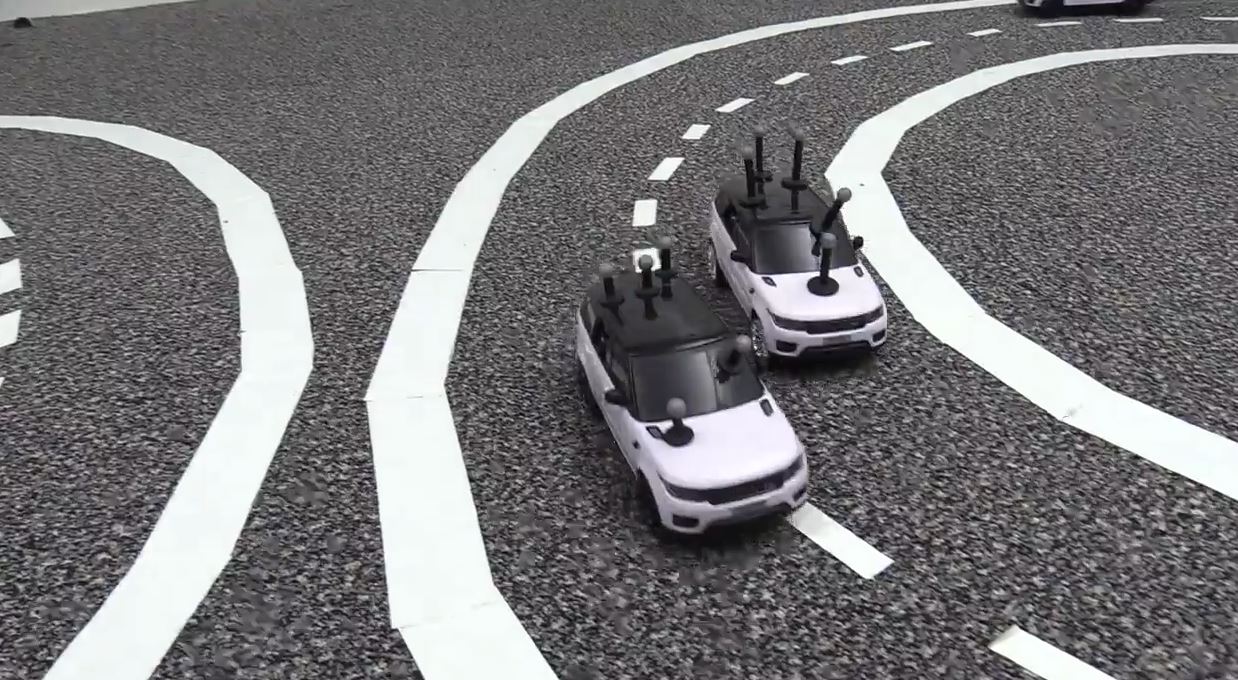 A fleet of driverless cars working together to keep traffic moving smoothly can improve overall vehicle flow by at least 35%, a study has suggested.

A team of researchers at Cambridge University programmed 16 miniature robotic cars to drive around a two-lane track and observed how the traffic flow changed when one of the driverless cars stopped.

When the cars were not driving co-operatively, any vehicles behind the stopped car had to stop or slow down and wait for a gap in the traffic, as would typically happen on a real road.

A queue quickly formed behind the stopped car and overall traffic flow was slowed.

When the cars were communicating with each other and driving co-operatively, as soon as one car stopped in the inner lane, it sent a signal to all the other vehicles.

Cars in the outer lane that were near to the stopped car slowed down slightly so that vehicles in the inner lane were able to quickly pass the stopped car without having to stop or slow down significantly.

When a human-controlled car was put on the track with the autonomous cars and moved around in an aggressive manner, the other cars were able to give way to avoid the aggressive driver, improving safety.

The results, to be presented at the International Conference on Robotics and Automation (ICRA) in Montreal, Canada, will help work to study how autonomous cars can communicate with each other, and with vehicles controlled by human drivers, on real roads in the future.

Each 1:24 scale model car used in the study is around 20cm by 8cm, making it possible to carry out testing indoors and at a low cost.

The vehicles are built primarily from off-the-shelf components and each cost around £60 (76 US dollars) in their basic configuration.

The study’s co-author Michael He, an undergraduate student at Cambridge’s St John’s College, said: “Autonomous cars could fix a lot of different problems associated with driving in cities, but there needs to be a way for them to work together.”

Co-author Nicholas Hyldmar, an undergraduate student at Downing College, said: “If different automotive manufacturers are all developing their own autonomous cars with their own software, those cars all need to communicate with each other effectively.”

Many existing tests for multiple autonomous driverless cars are done digitally, or with scale models that are either too large or too expensive to carry out indoor experiments with fleets of cars.

Starting with scale models of commercially-available vehicles with realistic steering systems, the Cambridge researchers adapted the cars with motion capture sensors and a Raspberry Pi, a credit card-sized computer, so the cars could communicate via Wi-Fi.

They then adapted a lane-changing algorithm for autonomous cars to work with a fleet of cars.

They tested the fleet in “egocentric” and “co-operative” driving modes, using both normal and aggressive driving behaviours, and observed how the fleet reacted to a stopped car.

In the normal mode, co-operative driving improved traffic flow by 35% over egocentric driving.

The researchers plan to use the fleet to test multi-car systems in more complex scenarios including roads with more lanes, intersections and a wider range of vehicle types.