Some people may remember the Six Million Dollar Man on TV in the 70’s about Steve Austin, who had special powers because he was bionic. Well, now there’s the bionic bird.

The new robotic flying drone has been styled like a seagull and has been created and developed by the German company FESTO.

It’s an example of bio-mimicking which doesn’t steal your chips – but could well be the future of airborne robots. The bionic bird took dramatic flight in front of startled visitors at the recent World Robot Conference in Beijing.

One of mankind’s oldest dreams is to fly like a bird, and many people will be able to remember that guy who made huge wings and took a run off the end of a pier hoping to achieve flight – only to plummet into the sea like a very heavy stone. Exactly. It’s not easy.
The bionic bird design was inspired by the Herring gull and the ultralight flying model features outstanding aerodynamics. It can take off, fly and land without additional power.
With flapping wings, it can easily pass for the real thing at a distance. The company states: “Festo has succeeded in deciphering the flight of birds.”

The design secret behind the bionic bird’s seemingly effortless flight is not that its wings flap up and down, but that the wings twist at specific angles throughout its flight to manoeuvre itself – generating lift and spilling less waste air.

As the bird flies, it sends back data to the remote operator in real time, letting him adjust the wing angles to achieve optimum flight. 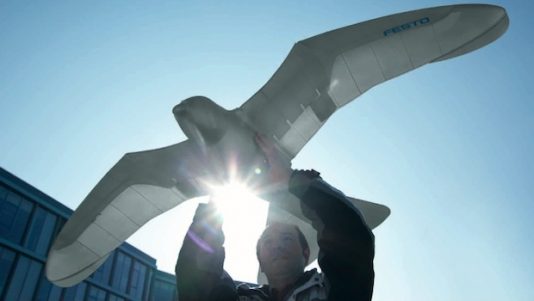 Testing the bird at FESTO (Festo)

The SmartBird, as it’s known, can do most things a real bird can do, such as turn its head, aerobatic turns and it can really take off and land by itself. No word on if it can wake you up at 5am if you’re on holiday near the coast!

This is ‘just’ a bird drone, but it’s easy to see the potential with this technology. You can rest assured that governments will be queuing up to have a piece of this bird-action for those risky covert-surveillance missions.