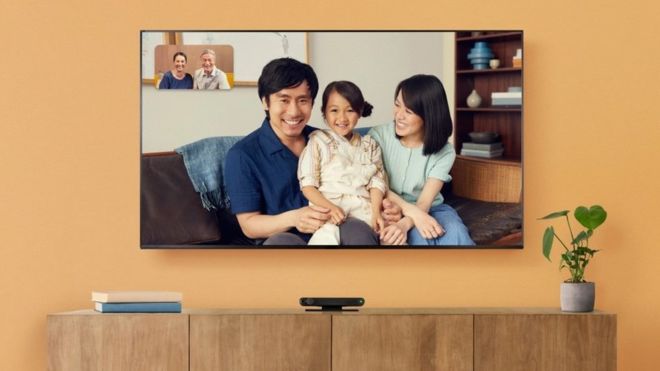 Facebook’s range of video-calling Portal devices are to go on sale in the UK for the first time, the company has announced. This means you’ll be able to Facetime via Facebook messenger on your TV. The future is here!

First released in the US and Canada last year, Portal devices have been controversial because of on-going privacy concerns surrounding Facebook.

The social network has been at the centre of a number of data privacy scandals – including the Cambridge Analytica breach – and the introduction of physical devices which place a microphone and camera inside people’s homes was met with concern.

But the social network has now revealed the new Portal, Portal Mini and Portal TV will launch in the UK later in the autumn.

Each of the devices includes a physical slider to block the camera lens, and users can also use the switch or a single tap of the device to disable the microphone – with a red LED light illuminating to confirm these have been disabled.

Facebook also said the artificial intelligence used which enables the camera and microphone to automatically follow users even as they move around the room during a call, all takes place on the Portal device, not Facebook servers.

However, the social network did confirm that it may listen to and analyse some voice recordings gathered from users interacting with the Portal voice assistant on the devices.

“If ‘Hey Portal’ is enabled, Portal does listen for the wake word ‘Hey Portal’. If it’s detected, including during a call, it will send a short audio clip of the voice interaction to Facebook,” the company said.

“Your ‘Hey Portal’ voice interactions are stored by default to make Facebook voice services better for everyone.

“A trained team may review a sample to make our voice services smarter and more accurate.

“You can view, hear and delete any of your ‘Hey Portal’ voice interactions in your Facebook activity log. You can also turn off voice storage in settings anytime.”

Reports suggested those reviewers heard a number of private conversations and allegedly illegal activity while carrying out this work.

As a result, many of the firms involved have either paused human reviews or introduced tools to enable users to opt out of such procedures in the future.

The new Portal and Portal Mini are designed to look similar to smart photo frames and come with a 10-inch and 8-inch HD screen respectively.

Portal TV is designed to sit either above or below a TV, plugging in to the screen to allow video calling on the larger display. We predict that FaceTime TV will be in every home before long, revolutionising communication.

It will go on sale in November for £149, Facebook confirmed.