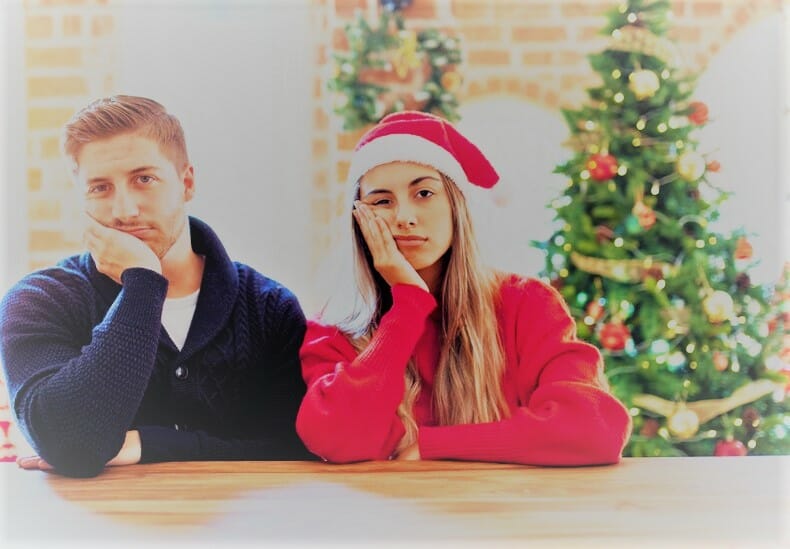 Do your rels sack off Santa to go into battle over Chrimbo games? Here’s some old-fashioned Christmas Day family games which should be sedate, but which will definitely fire up festive feuds – and Ebuyer’s suggestions for safe seasonal alternatives…

IT’S THE MOST WONDERFUL TIME OF THE YEAR… OR IS IT?

All the family together. Full of Christmas Day cheer for about five minutes. Then the rest of the day smiling but secretly celebrating not being together for the other 364… Christmas Day family games come after dinner. Things usually start with a round of opening presents – quickly followed by the house being turned upside down in search of batteries, and a long head-scratch ‘cos Auntie Sharon gifted you a Little Mix album and they were so last year, last year.

SCOFF AND LET OFF

And then Christmas Day dinner (that’s lunch in old money). Traditionally prepared with love and swearing by Mum – or, if it’s a post-sexist house, by Mum and Dad. Or maybe even by Mum and Mum – we’re not ones to judge. It’s Christmas, the season of good will to all… erm… hang on, we’re digging a ho-ho-hole here, aren’t we? We don’t really mean to… We’re open-minded people and whatever your family’s demographic (trad, post-trad, vegetable or hipster), every year Chrizzer lunch is the centre of the season. There’s always a vote on brussel sprouts (this time, let’s call that Bruxit) – and in 2019 there’ll probably also be one on whether Johnson or Corbyn was this year’s turkey. One of ‘em wants stuffing, anyway!

THINKING INSIDE THE BOX

Then it’s TV time. You can’t escape the gogglebox on Christmas Day – even though there’s nothing on you’d choose to watch, and by evening you’ll be Chrimbotose anyway. You’ve nibbled the burnt turkey bits, sorted and scoffed all the decent ones from the tinned chocs, blitzed a selection box and even one of those mince pies you can’t stand. You’re thinking about nodding off, but after a couple of large glasses of egg nog and maybe a little sherry Grandma insists everyone settles in to watch The Queen’s Speech. She pipes up about how Our Liz is just like us ordinary folk, oh yes, and, ooh, hasn’t it been a difficult year for Her Madge? A right annus horribilis. Again! Meanwhile, over in the corner, Grandad has fallen asleep and the brussels have taken effect. A right anus horribilis. Again!

CHRISTMAS SLAY – THE CHRISTMAS DAY FAMILY GAMES THAT MIGHT LEAD TO WAR!

At some point someone older and old enough to know better will definitely suggest turning off the TV and expressing family unity through the medium of going into battle with each other and falling out big time. Yes, it’s time for Christmas Day family games – even though playing them can actually constitute the family undergoing a disastrous MOT in the middle of a war zone… Here’s a brief selection of the best old-fashioned games to keep the family troops rolling before the traditional evening slump…

Otherwise known as ‘that one where someone mute makes wild hand gestures like they’re herding Peter Crouch riding a giraffe on a step-ladder, or an octopus playing ping-pong against itself’… Basically charades is gesticulating and swearing but on a massive scale. You think of a book, TV show, film or song and you mime the title. Everyone shouts out the wrong answers and it goes on for ages and you get so wound up you’re redder in the face than Rudolph’s nose and oh, just forget it!
Our verdict: You’re better off gaming on a new Samsung Galaxy smartphone.

A traditional card game. Players are dealt seven cards each, and then completely ignore them while slagging off Vicki, the woman who lives next door. It’s not even fair, she seems alright doesn’t she? No-one can even remember why they’re convinced she’s awful. But, ooh, she really gets the family’s goat.
Our verdict: You’re better off playing with a Star Wars smart droid.

Another card game, obvs – but for two players only. It involves your Uncle Dave rifling through all the Christmas cards your folks got, to find out the name of the lady who lives next door. Then borrowing a splash of the Old Spice your Mum got your Dad for Christmas , and “just nipping out for half an hour”…
Our verdict: You’re better off gaming on a HP laptop.

It’s a murder mystery board game involving thinking. Important: Christmas Day is not really a time for thinking (other than ‘are the shops open tomorrow so I can take that present back? Blimey I wish they’d got me something decent from Ebuyer’). If you must play Cluedo, there’s a load of dodgy characters knocking about a 1920s murder mystery house, killing each other with your average murder mystery household objects (chandeliers, pistols, dead parrots and a false leg). You have to work out whodunnit. Oh, and one more thing – in the end it usually turns out to be the butler, long fed up that he’s employed on a zero hours contract.
Our verdict: You’re better off gaming on a Sony Playstation PS4

This little known game originated in deepest Yorkshire. It’s so little known that we’ve never heard of it before making it up just now. We haven’t got time to invent a set of rules. But you could just totally wing it and kid everyone along with your own rules, and enjoy yourself by standing up and shouting “Ey up! Chestnuts!” at some random and inappropriate point in the evening. You’ll feel like a real winner. Well, less of a loser…

Alternatively, you could just forget the Christmas Day family games, and sit back and switch the TV on again. Isn’t it about time for Strictly?
Our verdict: You’re better off settling in for Strictly with a large screen LG TV.