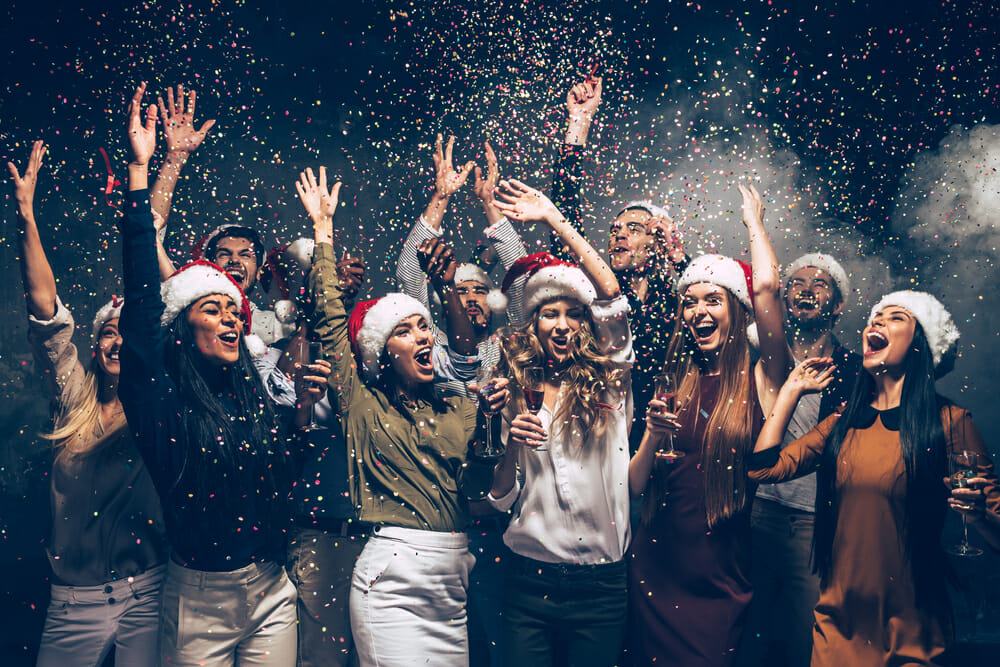 Are you excited that Christmas is finally here and dying to get into the festive spirit?

Well, why not throw a mega Christmas party? Invite all your friends and indulge in movies, food, drinks and games, for the ultimate festive feel.

To help you throw the Holy Grail of all Christmas parties, we’ve put together a few things that you MUST include for a successful Yuletide bash.

A party isn’t a party without music.

Stick on the ol’ faithful ‘Christmas party’ playlist on Spotify and watch the bodies flock to the dancefloor. Assuming you’ve decided to host this festive gathering in your house, you might want to consider a shoes-off rule if you want your carpet to make it to the new year.

There’s not a more amusing sight than watching all those merry drunkards trying their hardest to hit Mariah Carey’s high notes.

Want your party to stand out from the crowd? Introduce a Christmas themed fancy-dress code.

Enjoy the scenes as human Christmas trees, whimsical elves and tipsy Santas show up to your door ready for a night of mulled-wine fuelled Xmas antics.

The fancy-dress code will no doubt fetch a few giggles and is guaranteed to make your party memorable.

Make sure your attendees take the theme seriously by having them bring a small gift that can be added to a pile and awarded to the best dressed.

If you’re feeling flush, stock up on traditional festive drinks to really get the party started.

Whether you opt for mulled-wine, eggnog or your own style of Christmas cocktails, they’re bound to go down a treat with your thirsty guests.

Although it’s traditionally one of Santa’s favourites, no good party starts with a glass of milk. So, get the booze in or if you’re on a budget make sure to prompt your guests to turn up with some bevvys.

You don’t have to sit down and watch them but having Christmas films on in the background really helps set the festive mood. Besides, they provide a good excuse for you to sit down and sober up after 27 rounds of fuzzy duck.

Maybe steer clear of Love Actually or The Holiday – you want as few tears as possible.

We’d suggest something more like The Night Before or Elf, for festive cheer.

Don’t sweat though, if you can’t decide what to put on, check out our list of the best Christmas films for some ideas. Each film is rated by its level of Christmas vibes.

If the party isn’t taking off as quickly as you’d hoped, or there’s some boring sober-Sally’s sat in the corner, round everyone up for some drinking games.

Note that was DRINKING GAMES – nobody wants to sit around and play Buckaroo when they expected to be getting so drunk they’ll blackout until New year’s. (Please drink responsibly…)

Santa hat on the TV

This one ties in nicely with the Christmas movies idea. Simply place a Santa hat on the corner of the TV and whenever someone on screen looks like they’re wearing it, everyone has to drink!

This is easier when everyone’s together in a circle.

Nominate someone to choose a Christmas song, then the nominated person sings the first line. The person next to them sings the second line and so on, until you’ve made your way around the full circle and finished the song.

If you mess up or forget the words, you must drink!

You can change the phrase to something more in-keeping with the Christmas vibe… maybe Fuzzy Turkey or something. But for the sake of ease, let’s stick with the original.

If you’re unfamiliar with the game, it’s simple.

One player starts off by saying ‘Fuzzy Duck’, this goes around the circle clockwise as the other players also have to say, ‘fuzzy duck’.

When somebody messes up the phrase, they drink!

What’s the best thing about Christmas? The food of course.

Dazzle your guests with a mouth-watering selection of mince pies, pigs in blankets and roasted chestnuts. If you don’t, you know that there’s going to be a mass brawl over the Dominos order later.

The option of food will also keep spirits high and stop people getting drunk too early, as the mulled wine will no doubt be going down a treat.

If you’re imagining a Christmas version of the Project X house party, then we wish you the best of luck and suggest getting some home insurance.

Hopefully, our ideas have helped you plan the perfect festive gathering. Whether a car ends up in your pool or not.

If you’re lacking the Christmas party essentials such as a Bluetooth speaker or other devices, fear not. At Ebuyer we’ve got you covered.