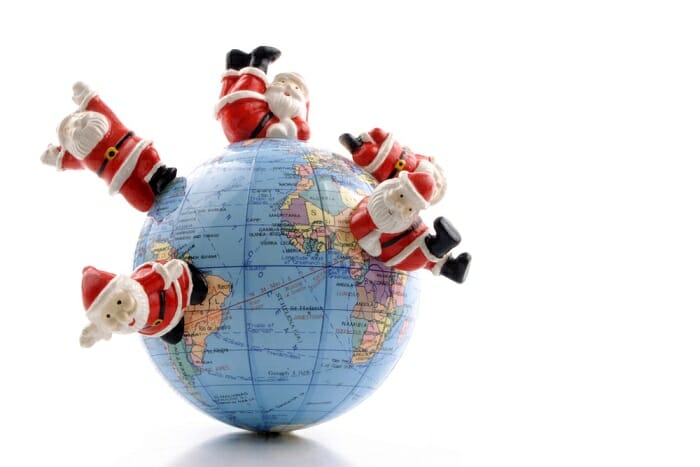 Your Christmas traditions probably include putting the decorations up, watching Christmas films, sending cards, and singing carols. Elsewhere in the world, the traditions are not quite the same.

Gavle goat is the world’s largest straw goat, its story beginning in 1966. It began by someone coming up with the idea to design a giant version of the traditional Swedish goat. It’s built in the centre of Gavle’s Castle Square for advent. Although impressive to look at, it’s led to another tradition of trouble causers trying to sabotage it. It’s been successfully burned down 29 times, hit by a car and been subject to kidnapping plots. Poor goat.

This Christmas tradition may be one you’ve already heard of. Krampus is said to be St Nicholas’ evil accomplice who captures naughty children and whisks them away. Whilst most countries know of this creepy guy, Austria take him seriously and in the first week of December, Austrian men dress up as Krampus, scaring children.

Many homes in Finland come fully equipped with a sauna when you move in, which is lovely. But at Christmas time, the sauna becomes a sacred place associated with dead ancestors. On Christmas Eve, its traditional to strip naked and visit your sauna to relax before the big day. Not the usual use for a sauna, to say the least.

Every year on Christmas morning in Caracas, Venezuela, huge crowds of people make their way to mass on roller skates. No one knows why or how this Christmas tradition came about, but it is now so well established that many of the city’s streets are closed to traffic all day.

If you’re in Greenland at Christmas time, don’t expect to find any turkey. It’s a tradition in Greenland to eat mattack, which is raw whale skin blubber. It’s supposed to taste like fresh coconut, although it’s so hard to chew it usually has to go down in one. Kiviak is also traditionally eaten at Christmas time by people in Greenland. It’s a small bird that has been buried in seal skin for several months until its decomposed. Sounds yummy.

An estimated 3.6 million Japanese people have KFC at Christmas time, according to BBC worklife. There are no long held Christmas traditions in Japan so in the 1970s, tourists visiting Japan ate KFC as an alternative to turkey. Soon the trend became popular amongst locals, and sales at the fast-food restaurant are now five times higher at Christmas than other times of the year. Many customers even order their chicken months in advance, so they don’t miss out.

The caganer is a traditional sculpture that originated in Catalonia. In simple terms, it is a hidden figure in a nativity scene that poops. Charming isn’t it? Sometimes the caganers are modelled as celebrities, government officials or royalty. The figure is usually hidden in the scene and children must try to find it. The tradition has been going on since the 18th century, but nobody knows why.

No cleaning over Christmas, Norway

Christmas in Norway is a bit different to ours. Long ago, Norwegians believed that Christmas Eve was the day when witches and spirits would come out of hiding and cause havoc. Since a witch’s main mode of transportation is a broom, the people of Norway hide all their brooms before Christmas to keep the witches away. Good news for the usual cleaner of the household.

If you’re looking for something different at Christmas this year, why not travel to one of these countries and experience the traditions yourself. Go on, you know you want to.