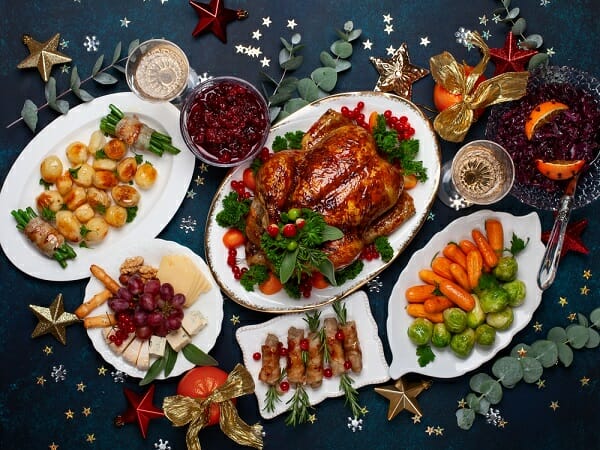 Looking forward to your Christmas dinner tomorrow? The annual meal is a big part of the festive traditions. There’s really nothing better than being able to eat your weight in food and not get judged for it. But have you ever wondered where the Christmas dinner comes from?

We’ve got past kings to thank for the popularity of turkey at Christmas dinner. Henry VIII was the first English king to enjoy turkey, but Edward VII made eating it at Christmas fashionable.

Until the 1950s, turkey was considered a luxury, and people would usually have beef or goose instead. Nowadays though, 87% of people in the UK believe Christmas dinner would not be the same without a roast turkey at the table.

Brussel sprouts are one of the oldest Christmas traditions, they’ve been around for 400 years. It’s thought sprouts were only included in Christmas dinner because of their ability to grow in winter months. Many people think they should just go back to where they came from.

Pigs in blankets originated in America, the earliest record of them dating back to 1957. We know them as sausages wrapped in bacon, but outside of the UK they are wrapped in dough. How strange.

Us Brits love pigs in blankets, especially on our Christmas dinner, but no one really knows why they ended up there.

Christmas pudding; you either love it or hate it. The pud began as a porridge made of beef and mutton, but slowly turned into plum pudding. Its been through some hard times, after getting banned in 1664 by the Puritans.

Poor people would save up all their money to buy ingredients for a Christmas pudding, and by the 19th century these ingredients were standardised, after much deliberation.

Christmas pudding has been simplified over the past century though, to suit modern tastes.

Mince pies were originally filled with meat and first made in an oval shape to represent the manger that Jesus slept in. During Stuart and Georgian times, mince pies were a status symbol at Christmas in the UK, and rich people had pies made in all different shapes to show off to their friends.

Mince pies have evolved a lot over the years, and thankfully don’t contain meat anymore. They are now filled with spiced fruit and are enjoyed by many at Christmas time.

This unfortunately named drink puts people off immediately with the thought of drinking egg. There is some confusion where it came from. Some say it originated in England and some say it was the Americans who invented it. Either way, eggnog was first associated with Christmas by us Brits after aristocrats used to drink it in the winter months.

Is your mouth watering now? Don’t worry, not long to wait until Christmas Day.

A White Christmas – what are the chances?
Your Boxing Day Traditions
To Top