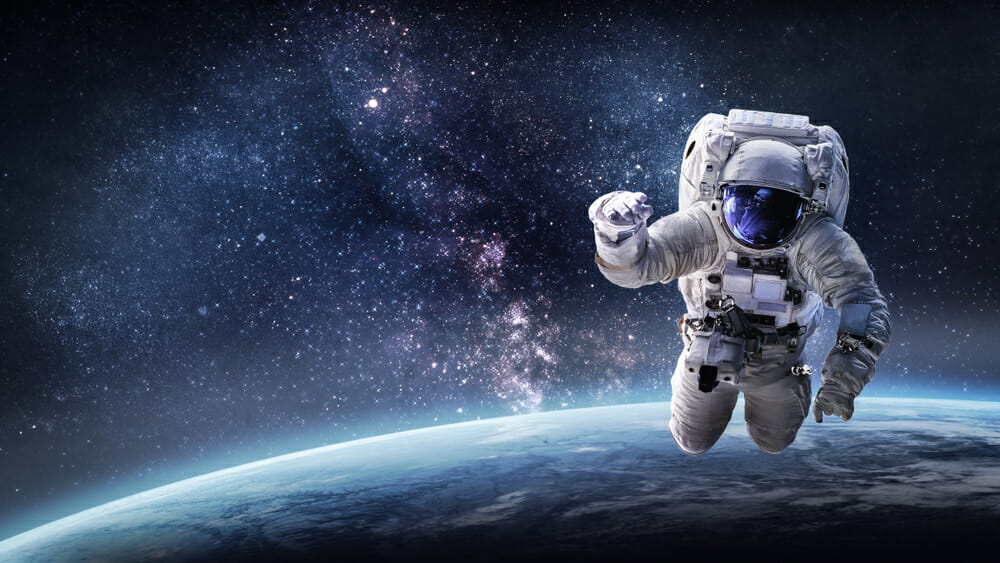 There’s still a lot to learn about the universe… But what if we told you that some of the popular ‘space facts’ we swear by are ‘space myths’ – simply not true?

Matt Brown, a writer and a former editor of scientific manuscripts, debunked some of the most common space myths in one of our favourite books of the last few years: Everything You Know About Space Is Wrong.

We look back at our top five debunks from his book…

It’s a long way up into space

Captain Kirk might have dubbed it the final frontier, but space isn’t really that far away. The internationally agreed boundary is easy to remember. It’s exactly 100 km (62 miles) above sea level. You could comfortably drive it in an hour (if only you had a flying car).

The US Air Force has its own definition of where space begins. It plumps for around 80km (50 miles) – the boundary between the mesosphere and the thermosphere. Happily, this definition allowed test pilots of the X-15 (a hypersonic rocket-powered aircraft operated by the US Air Force and Nasa) to claim astronaut wings.

Sputnik was the first man-made object in space

The satellite Sputnik astounded the world when it was put into Earth orbit in 1957, and it’s often regarded as the first human artefact to reach space. In truth, it wasn’t.

That distinction belongs to the V-2 rockets launched by the Nazis during the Second World War in the 1940s. From 1944, these ballistic missiles were powerful enough to surpass the boundary of space (100 km) before crashing back to Earth.

In other words, the first human object in space was launched from German soil thirteen years before the Soviet Union’s Sputnik.

The V-2 rockets didn’t go into orbit, and were laden with payloads of evil, so tend to be struck from history in our more heroic narratives of space exploration. But the unsavoury fact remains that the Nazis were the first to touch outer space.

Humans were the first to visit the Moon

If you thought that the Apollo astronauts were the first Earthlings to circle the Moon, then think again.

They were preceded by a miniature Noah’s Ark of a space probe called Zond 5, which looped around the Moon in 1968, a few months before Apollo 8.

This Soviet craft contained wine flies, mealworms and a pair of bemused tortoises on the first ever deep-space mission to carry living creatures. The parable of the hare and the tortoise had received the ultimate vindication.

The Sun is a big ball of fire

“Doubt thou the stars are fire,” said Hamlet (the lead protagonist from Billy-Boy Shakespeare’s play of the same name). He should have been more sceptical.

The Sun and stars are powered by nuclear fusion. Hydrogen ions (protons) fuse together near the core to form helium. Put in these tiny atomic terms, that doesn’t sound all that powerful.

But the quantities are staggering. Every second the Sun converts seven hundred million tons of hydrogen to helium. If you want a horrific comparison, that’s like consuming the mass of every living human, every second.

The Sun, then, is a seething ball of plasma – a hot, electrically charged gas.

Astronauts float in the space station because there is zero gravity

Although astronauts on the space station appear to float freely about their modules, they are in fact plummeting. Fast. Their bodies, and the space station itself, still feel the inexorable tug of Earth’s gravity, and they fall towards the planet at great speed. Happily, they keep missing.

The spacecraft and its occupants are also travelling sideways at many thousands of miles per hour (which is why rockets never go straight up, but describe an arc).

Effectively, the space station is falling around the curve of the planet. This controlled freefall gives the impression that gravity isn’t there, but it is – about 90% as strong as at the Earth’s surface.

These amazing space myths and many more are detailed in Everything You Know About Space Is Wrong by Matt Brown. We’d recommend you track a copy of this fascinating book…

But, really, we think someone should make a TV series on this stuff!

Moving to a new planet: The beginner’s guide
NASA seeks astronauts… Have YOU got the right stuff?
To Top