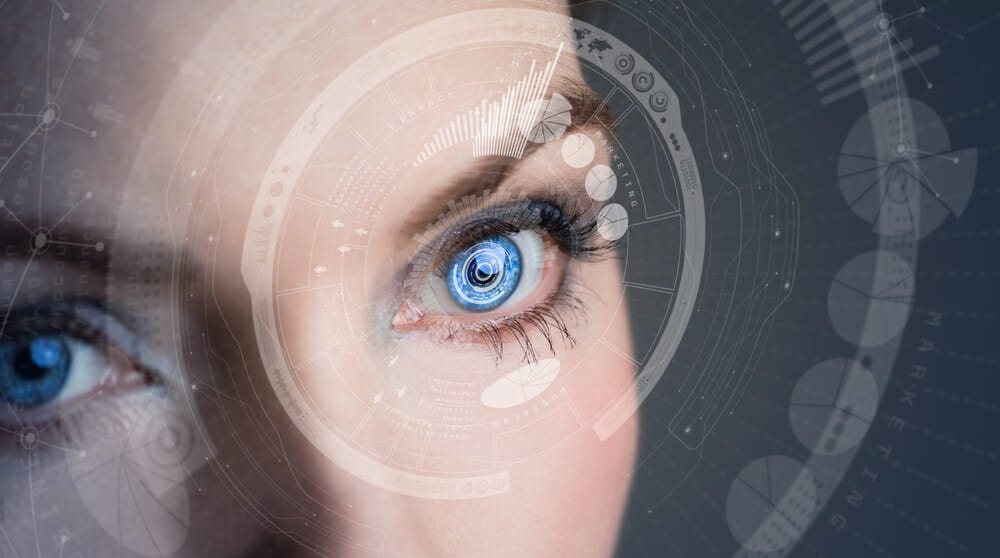 When you think of a sci-fi movie, what do you picture? Robots?… intergalactic space craft? What about virtual reality contact lenses? Well, thanks to two American tech experts, that futuristic concept can become a literal reality.

Mojo Vision a recent start- up company, have incorporated microelectronics and a tiny screen into a wearable contact lens. Instead of Google Glass or another brand of smart glasses, Mojo lenses are designed to fit your eye like a normal contact lens, but with virtual reality built in.

The company was founded by Drew Perkins and Michael Deering in 2015. With their previous experiences working with VR, visual technology and artificial intelligence, (and both suffering from poor eyesight) the pair decided to create something that people could really benefit from. After years of research and over $100million in investment, Mojo Vision had recently announced at CES 2020, they are working towards gaining FDA approval.

This lens contains a miniscule 14K-ppi display, which Mojo Vision claims makes it as “the smallest, densest display ever designed for such a purpose.” (link for blog) Users of the demo have described the look of the graphics shown on the lens as basic but functional.

Power to the Mojo Lens prototype is delivered wirelessly. Eventually a tiny battery will live on the lens itself, along with a 5GHz radio that will transmit data. Mojo Vision plans to use Wi-Fi or Bluetooth to move data from the lens to your smartphone and 5G or Wi-Fi to send data to the cloud. There are plans to charge the lens with a wireless charging device once it reaches the consumer market.

Demos of the lens prototype show different graphics displayed on the periphery view of the eye. For example, the outside temperature or traffic updates will appear as if it were on a transparent screen in front of you. There are also examples of the lens displaying calendars, to do lists and music controller by using the unique movement of your eye. The varying abilities of the lens are similar to a VR headset. Just without the social embarrassment of wearing one in public.

The thought of being able to improve sight as well as having a gadget that could be helpful to so many people is a very exciting prospect. The researchers for Mojo Vision have consulted with charities that specialise in sight impairments. They aim to give people the tools they need for better overall sight.

The developers are looking to add even more functionality to their lenses. There are plans for the lenses to include a map option, so instead of having to keep checking for directions on your phone screen, you can see turn-by-turn directions on the ground in front of you whilst walking. In the demo images that Mojo Vision has released, speed, heart rate and calorie analysis will appear in the line of sight when you are exercising.

The developers at Mojo Vision are very ambitious as they have even discussed plans to create a second lens that would have night vision and edge detection- a way of highlighting objects in a darkened space. This technology in particular could be used by firefighters or the military.

With new stories of data breeches happening almost daily, there is a heightened worry for our personal data and how safe it really is.

Mojo Vision have indicated the contact lens could eventually be able to store images of people you have encountered and remind you of who they are when you see them again. Of course, these lenses are still in the development stages and have only just been given the go-ahead to start human testing. However, there have been questions about the privacy concerns that could come with a contact lens that’s connected to data. But Mojo Vision have stated they are building an invisible computing platform  to keep our personal data secure.

There’s also the question of cost. With this being the first patented VR contact lens of its kind. When these lenses make it to the consumer market, they will likely be marked at a high price. And with the lenses given an average life span of one year, it could be an expensive accessory.

One for the future

But there’s no denying that this breakthrough is exciting. The future possibilities for this type of technology are seemingly endless. They could genuinely help people with sight impairments or people that need assistance in their job or everyday lives.

How does it feel? – Blue Monday and mental health
Is technology in sport a positive thing? Poll results
To Top