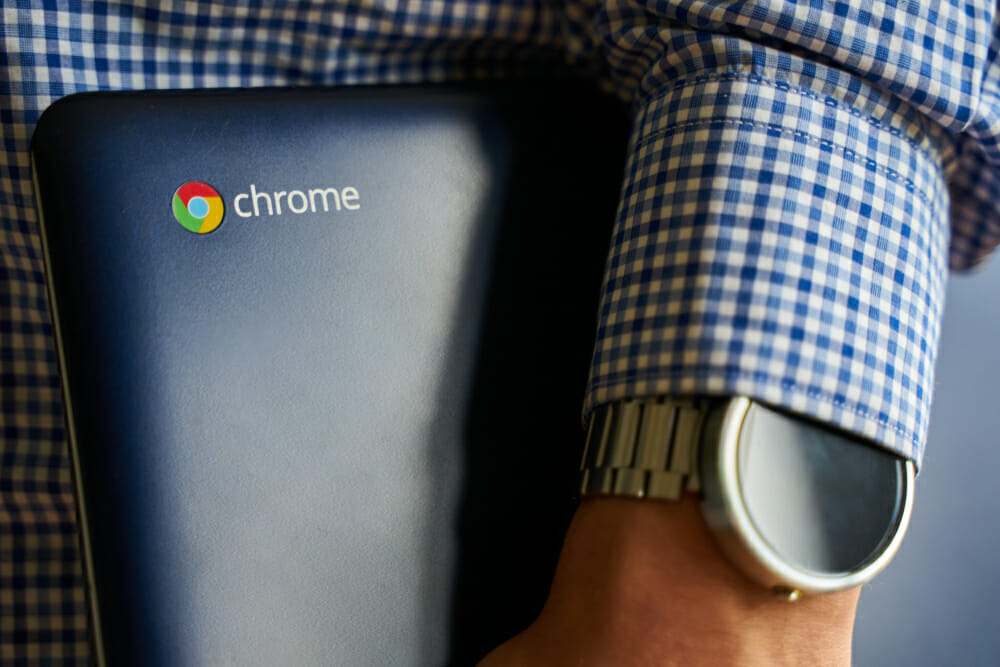 Over the last few years at Ebuyer, one of the most common questions we’ve received from customers has been “What is a Google Chromebook?” – and we’re happy to answer, here.

We’ve probably all heard the adage “a laptop contains more computing power than they used to put man on the Moon”. In the absence of actual charts, spreadsheets and circuit board diagrams, whether that’s strictly accurate or not will remain up for debate. But there’s no doubting that when we use any kind of mobile device (laptop, tablet or phone) we have advanced technology at our fingertips. Tech that would have been unthinkable for home consumers just twenty years ago. Perhaps the most significant development in laptop technology in recent times has been the Google Chromebook.

A Google Chromebook is a laptop, basically. Except it isn’t. It’s not a laptop in quite the conventional way you’d probably think of a laptop. We’ll explain here exactly what we mean by that – and why a Chromebook could be just the device for you.

HOW DOES A GOOGLE CHROMEBOOK WORK?

Though you can do many of the same sort of things on a Chromebook as you would do on a standard laptop, it functions in a different way. A Chromebook runs Google’s Chrome OS (operating system) rather than the more usual Windows or Mac systems.

A Chromebook is an almost entirely web-based experience, and the physical device itself is merely an interface. You use it to access all of your activities, tasks and documents through a browser – Chrome, obviously! This means users do more-or-less everything via the web.

A Chromebook does typically have a small amount of interior memory – but in general it does away with the need to use your it to store files, folders, images, music, movies, documents and spreadsheets, etc. They’re all stored ‘in the cloud’. You could also, if you did want to keep a ‘physical copy’ of your files (and in some cases that’s advisable), attach an external hard drive and save all of your documents and files to that, too.

WHAT ARE THE BENEFITS OF CHROMEBOOK?

One of the most common questions about these devices is “what are the benefits of Google Chromebook?” – and it’s easy to answer because there are many.

Chromebooks don’t require large hard drives. Because your documents reside in the cloud, and because the apps you use are web-based (and so need very little processing and memory space), there’s plenty of computing power freed up on a Chromebook. Your device will be incredibly fast. A battery charge will last literally all day. The OS loads quickly and doesn’t rely on high-end components to function effectively. This helps keep the price of a Chromebook down while the level of performance is up.

HOW CAN I WORK ON A CHROMEBOOK?

With access to a whole suite of apps, the Chromebook is a versatile and efficient device for work. The Google Store is filled with apps designed to help you complete your professional tasks more productively. This range includes Gmail for keeping in touch, Google Calendar so you can keep organised and on schedule, Google Docs for word-processing, Google sheets for spreadsheets, and Google Slides for presentations. Many other web-based apps are available to help you undertake common work tasks and keep control of your workload at every level. All of the apps should be quickly and cleanly available through the central ‘hub’ of your operation; the Chromebook.

HOW CAN I PLAY ON A CHROMEBOOK?

With that vast selection of apps available through the Chrome operating system, the Chromebook is a highly versatile device for entertainment, too. For instance, if you’re a film or TV fan you could binge on the latest box set or see the hottest new movie on Netflix or iPlayer, itvHub, all4 and more. Never again the inconvenience of missing an episode when you’ve got your Chromebook. Stream away!

If you’re a gamer and you want to play, the Chromebook is able to handle some of the most fun online games around. The types of games which work best on a Chromebook are; those you access through the web store’s games category, and which run as an extension in your browser (or you’re redirected to a website where you can play); and, secondly, HTML5 games which run in the browser. You’re not going to be playing new release high-end ‘gamer’s games’ on your Chromebook (that’s what consoles and gaming PCs are for), but you’ll definitely get some quality gaming time on the most fun web-based games around.

HOW DO I SOCIALISE ON A GOOGLE CHROMEBOOK?

We mentioned email a little earlier (and on a Chromebook that essential is met by Gmail), but all of your other ‘contact’ activities can be enjoyed too. Social media is very important in the modern world – it’s pretty much the main way we interact with those people we don’t see on a day-to-day basis. So Chromebook makes sure that all of your Facebook, Twitter and Instagram needs are covered too. And with a variety of other social media apps available through the web store, there’s no excuse for not keeping in touch, and there’s no reason for not keeping your socials on point and up to date!

ANYTHING ELSE I SHOULD KNOW ABOUT CHROMEBOOK?

Many different tech companies make Chromebooks – but from one brand to another there are, of course, slightly different technical specifications in terms of processors, memory size and so on. But with Google Chromebooks being web-based machines – and all of them being very capable – making the right choice for you could be down to something as simple as your personal feelings over the specific aesthetics of a particular model and make of Chromebook.

Obviously Chromebooks and laptops have some advantages over each other. There are certain tasks each can fulfil a little better than the other.

If your main requirement is to surf the internet, stream your shows and write documents, then a Google Chromebook is the solid and value option for home. For work it’s a great out-and-about / on the go device capable of handling all of your day-to-day office tasks.

If you’re looking for that small step into the digital era’s next giant leap – where more or less everything you do will be web-based – the Chromebook is the one for you.

Energy saving tips for desktops, laptops and TVs
Laptops under £300: Our top picks.
To Top