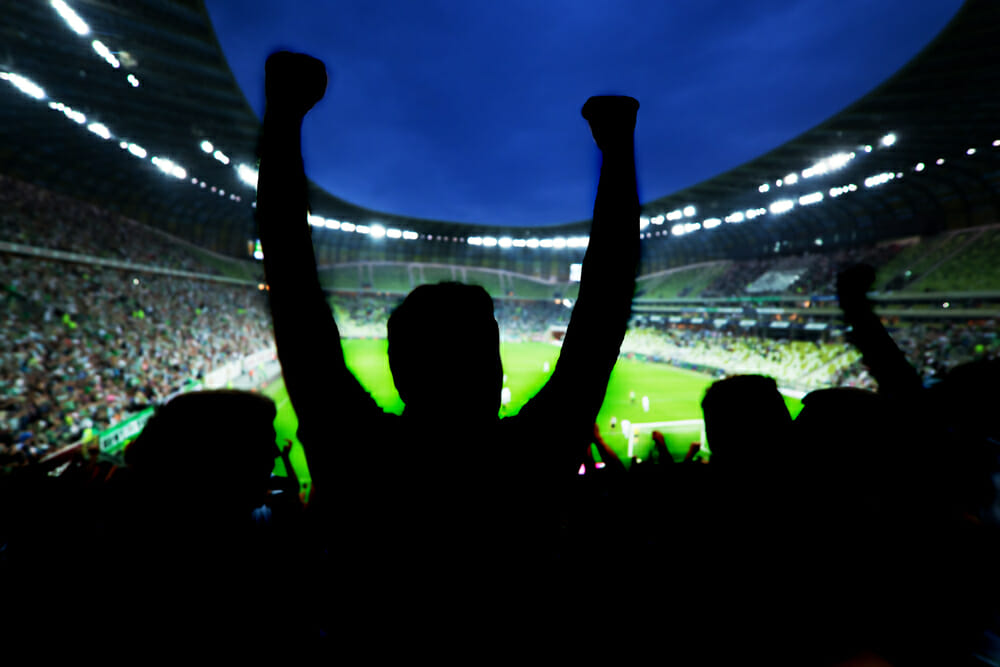 It’s a beautiful noise… Sometimes exciting, sometimes funny, sometimes incredibly moving. Anyone who is lucky enough to support a football team which pulls in more than one man and his dog, and who has actually been to a match, would say the same. The sound of the crowd is brilliant.

Obviously there have been no matches in recent weeks, and so no TV football either… But, with the game ‘coming back’ very soon, Ebuyer has put together a special package of top-quality TV deals so that your usual feast of football can become a bonanza banquet of the beautiful game.

But, yeah. Crowds… I’ve heard some of the wittiest, funniest and most passionate humour in my entire life from the crowds at football matches. I have also heard the most vivid excitement, and total release… And unbottled grief. Funnily enough, my most memorable crowd noise moment featured absolutely no noise whatsoever. Pin-drop quiet for the minute’s silence at kick-off that my local team offered following the death of my Dad (who had supported them since he was a small boy). Yes, a football club can mean everything, and the crowd can be all things in life.

Anyway, I digress. Should you be in the stands and busy checking an accy on your ‘phone (or whatever), a surge in crowd noise is also a handy indicator that something’s going on and you need to look up at the action on the pitch.

So, the sound of the crowd is actually an absolutely essential part of the whole football experience. In these weird lockdown times – with top-level domestic football about to return but only ‘behind closed doors’ – it’s interesting to note that TV broadcasters have decided to do something about it. There will be an option to add crowd noise into the feed of the games they’ll show in the coming weeks.

Sky Sports, BT Sport, the BBC and Amazon Prime will offer audiences ‘crowd noise or no crowd noise’ options to suit individual taste. Viewers watching at home on TV will be able to hear familiar crowd sounds emanating from the stands, though there will actually be no-one in the stadiums other than the players, match officials, club staff and cameramen. And, mooching about somewhere, probably John Terry (in-joke).

How will it be done?

It’s quite basic, really. The technology involved is obviously ‘broadcast production level’ – but the idea is very simple.

In partnership with the ever-popular computer console game EA SPORTS FIFA, broadcasters have put together a library of bespoke and team-specific crowd noise. An “audio carpet” has been filtered from previous meetings of both teams in a fixture, and that will be mixed with the real ‘on the pitch’ noise of the match actually in progress. When there are moments of action such as goals, penalties, near misses, bad tackles and VAR decisions, the TV producer will ‘insert’ a specially created sample of crowd sound from the library available.

Broadcasters hope this lockdown innovation will bring some of the atmosphere of the Premier League into homes, especially for fans using a decent soundbar. There’s no denying that technology has been applied intelligently and, gratifyingly, with the offer of the best possible experience under the circumstances firmly in mind.

It seems, largely, to have been a hit when used for some European fixtures recently. UK viewers of BT Sport’s Bundesliga TV football coverage were able to ‘pipe in’ crowd noise as they watched matches featuring top teams Bayern Munich and Borussia Dortmund. Gary Lineker (crisp ambassador) found it innovative. Not quite sure he really understands film soundtracks, but his heart was in the right place when he Tweeted:

Does noise matter in sport?

But, in terms of the noise made by spectators, for most sports the sound of the crowd has an impact on events of the game. It influences – encourages, discourages – the players, so can influence the outcome. Think about how the crowd willed Ben Stokes on to his amazing performance, in one of England’s Test Matches against Australia last year. Think about the roars from beer-guzzlers which greet those beer-guzzlers as they stand at the oche needing double-top in darts. Think about the roar of the crowd as athletes speed their way around the track in the Olympics…

But it’s especially so in the case of footballers.

Imagine, you’re a gangly-legged winger. A latter-day Chris Waddle. Probably without the mullet – although I’ve seen one or two of those monstrosities cropping up again in recent times (which has been very hard for me as I fought in the mullet wars of the 1980s and still have PTSD).

Anyway, you’re a Waddle-ish talent, and you’ve wended your magic way up the wing. The ball is seemingly conducting a love affair with your feet. You’ve already beaten three players, piece of pie. But there are twenty yards more to go until you’ve got a shooting chance. Your legs are tired – oh, shut up legs!

No crowd? No noise! Meh… Pass the ball.

But: Crowd? They roar you on, with as much earnest brio as your Mum did the first time you used a potty on your own… It gets louder, and the crowd is really excited – and that bloke on Row F is so lit-up with excitement he’s almost becoming pure white light… So you race on and… BOOM! From somewhere you get the energy, you swing your leg at it and connect and you arrow the ball into the top left corner of the net! Best goal ever!

Obviously that level of influence is really not likely to happen in games played in empty stadiums during the next round of broadcasts. So the nature of the games themselves remains to be seen and will be quite interesting to note. Will they be lacklustre? Will they be mediocre and mild? It’s a serious consideration. But my guess is that after a tentative few minutes the players will just ‘go for it’, having been out of action for months, and desperate to impress. The crowd noise you hear will add an extra layer for TV football viewers, and perhaps the whole thing might even be quite captivating in its own unusual way? And maybe the players will be able to hear YOU roar from your armchair?!

What about seeing the crowd?

The idea of an additional visual element may be a while off yet. There are currently no plans to position ‘fake crowds’ in stadiums for the UK’s televised Premier League fixtures. Possibly, the organisation has been sensible and taken heed of the reaction to South Korean side FC Seoul’s attempt to generate some sort of visual atmosphere. They populated their entire stadium with blow-up sex dolls for a match a couple of weekends ago. The internet, nay the world, was also open-mouthed…

Perhaps a slightly more appropriate way to go for the Premier League would be to take note of Australian NRL side Sydney Roosters. They offered the public the chance to pay for a cardboard cut-out of themselves to be placed in ‘their’ regular seat to ‘watch’ the team in action. Unsurprisingly (sports fans are fanatical) the club filled its stands with cut-out, and raised some much-needed income. Mind you, one wag paid for a cut-out of Boris Johnson’s rogue-journey chum Dominic Cummings. Jokes aplenty from commentators on the other side of the world, about trips breaking lockdown, possibly distracted from the spectacle of the game itself!

Where does football go from here?

Like so many other things, sport under the current conditions is not ideal. And broadcast sport is not an exact science – including TV football. There is a learning curve to be travelled. But isn’t it odd to realise that the truly beautiful sound of the crowd is something we’ve all taken for granted prior to this coronavirus crisis and lockdown.

At least there is a way of doing things. A ‘make do’ way, yes. But an ‘as best we can’ approach. The same for all parts of football life – whether that’s sinking a few pints with your pals currently meaning a couple of tinnies and a Zoom chat on your smartphone, or going for a curry with them being a lonely pop-and-ping… I reckon that for the fans at home (hopefully watching on huge TVs from Ebuyer’s latest amazing deal), this artificial crowd noise innovation is a welcome enough start. While they’re chomping at the bit for the return of ‘normal football life’, this could be a valuable valuable reminder of that precious matchday experience…

Good value TV: A ‘lockdown’ guide
How to choose the best Smart TV…
To Top