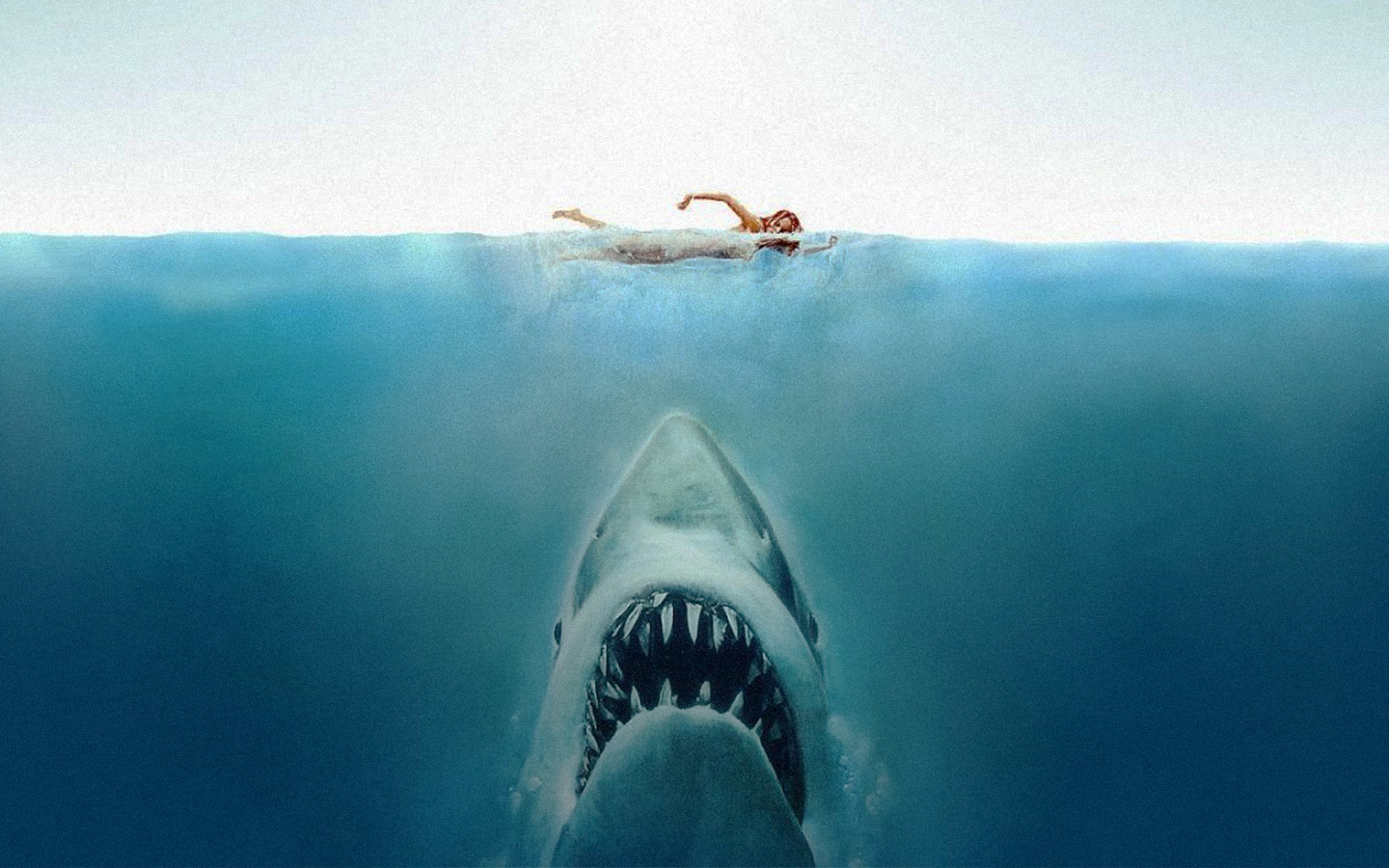 The benefits of owning a 4K TV or a smart TV should be well-known to followers of this blog. But one aspect we only occasionally talk about is what you could actually watch to get the max from your monster! So, this edition focuses on a few classic movies designed to get those extra pixels a-pumpin’…

The rejuvenation of JAWS – Steven Spielberg’s more-than-just-a-shark movie – began with a restoration for DVD and then an upgrade for blu ray. Just a couple of weekends ago it celebrated its 45th anniversary with a significant remastering for its 4K release. All of those tech advances have given a classic film the legs to last for at least another fifty years.

Back in 1975, JAWS looked as good as it possibly could when it bit into the summer box office and ripped record books to shreds. But the tech of that time just wouldn’t cut the mustard these days. Cinemas and TVs back then were laughably primitive compared to now. With the home cinema revolution getting into full swing over the last 15 years, Spielberg and co set to work on a bunch of classics, to give them fresh life for a new generation of film-lovers.

Originally for the ‘collectors edition’ DVD release around 15 years ago, JAWS underwent a makeover to bring it into the 21st-century. Integrity and respect were the watchwords for the whole process – and not a single CGI ‘improvement’ or scene-edit was made. The actual film would remain exactly as was – and the upgrade process was a deep clean, a sympathetic polish and a touch of sprucing up the décor. (For instance, different shots in one scene would all be graded and colour-matched exactly).

But how did they do it? The filmmakers struck a new ‘digital print’ from the original film stock negative – large parts of which had physically degraded from 40-plus years of storage in the dusty Universal Studios vault. Hero boffins worked through the whole movie, frame by frame, on state-of-the-art computers running state-of-the-art software.

They painstakingly corrected all faults (every single frame had something wrong, even if only minor). There were many scratches, drop-outs, burn-outs, colour discrepancies, sound bumps and clicks – all of which were addressed and tidied. Finally, a new ‘definitive’ negative, and a new digital print, were made.

4K? Farewell and adieu to you poor looking film prints…

Of the finished ‘new’ version Spielberg himself commented: “JAWS now looks better than it did when it was first released. It looks the way the public should have seen it, if the cinemas of that time could have coped”. The blu ray (released in 2013) was an enhanced scan struck from the negative of the DVD version, and the 4K (released this year) is an upgraded version of the blu ray!

I can confirm, having watched the 4K just a couple of weekends ago (on the film’s 45th anniversary in fact), that it is absolutely amazing. Eye-poppingly good. The picture has incredible colour and definition with the smallest details clearly visible. The film also sounds tremendous (John Williams’ legendary score is presented in Dolby Atmos, and has to be heard to be believed). This is a great 4K disc to start your collection with, and enjoy through a compatible 4K TV!

Occasionally dodgy shark aside, JAWS is still the absolute movie masterclass in storytelling – and of course it features those three truly compelling lead role performances. It’s quite moving, to be honest, to be able to say that JAWS feels as if it was made yesterday. It’s not a film that should ever be allowed to fade away and be forgotten. Perhaps there will be an 8K version in time for the 50th anniversary, in 2025?

For now, 4K bodes well for many other classic movies in the archives -and the hope is that a similarly dedicated team work on them. The restoration of the world’s movie history is an important part of ensuring our cultural heritage lingers for as long as possible.

You’ve read this far – “Well done, Chief!” as Quint might have said…

But let’s have a quick reminder of what exactly 4K is. Full HD (otherwise known as 1080p) was the TV standard for a while. With 1920 pixels horizontally and 1080 pixels vertically there were around two million pixels visible per frame. But 4K TV offers viewers a whopping 400% increase in quality

The picture is made up of 3840 x 2160 pixels. So, as you’d expect, with approximately four times as many pixels as a regular Full HD picture, the 4K specifications make for an absolutely cutting-edge viewing experience. Now that’s that sorted, here are our classic movie disc suggestions…

Lawrence Of Arabia, David Lean’s historical epic, is fast approaching its 60th birthday. Significantly, the film looked magnificent anyway (incredible cinematography, plus desert lands, Peter O’Toole and Omar Shariff) so it was ripe for the 4K treatment. Interestingly, this 4K UHD version has been struck from an 8K scan of the original 70mm camera negatives, which have been meticulously restored. Put simply this is by far the best looking version of by far one of the best looking films ever made. And, of course, the story of TE Lawrence is a bloody brilliant story!

Okay, okay, so this next one is the second Spielberg film to be mentioned in this article. But it’s here absolutely on its own merit. Ol’ Steve didn’t slip us a fiver to say this, but Close Encounters Of The Third Kind looks stunning in its 4K version. It was (as most restorations are) completed with the input of the cinematographer and the director.

Originally released in 1977, this new edition is based on the original camera negatives and produces images which are more detailed than ever. It’s a slow-burn movie in true Spielberg style, and the 4K specs are immersive, giving it more atmosphere than first time round as it builds to its incredible climax.

Why pick Jerry Maguire? How can a film from 1997 be considered a classic worthy of sitting alongside Jaws and Lawrence Of Arabia? Dunno – it just can. Watch it and see… The story of a shallow sports agent growing a conscience and becoming ‘one of the good guys’ is a kind of modern echo of the sort of moral-compass pictures Jimmy Stewart made way back when. It’s a proper family movie, a feel-good that even the fellas can enjoy, and it is served well in 4K. The colours pop, it looks gorgeous, and sounds great.

And, finally, Star Wars: The Empire Strikes Back. The second film in George Lucas’s epic space-fantasy saga (or the fifth if you’re watching them in story order), ‘Empire’ was originally released in 1980. This 4K version is not without slight caveats, but they really would be nitpicking to go into. Let’s just say this is a big improvement over every other print of the film. ‘Empire’ on 4K is a solid must-have.

There are many more 4K releases out there worth choosing, these days. Here, we just wanted to give you a handful of the absolute ‘essentials’. And, of course, there are many different 4K TVs to choose from, too. At Ebuyer we pride ourselves on giving you plenty of food for thought when you browse. Take a look through our full range of 4K TVs and smart TVs (and pick up a cracking soundbar) and you’ll soon have your home cinema system up to spec. You could even opt for a mega-fan-pleasing 4K projector!

Now you can really start enjoying that shark!