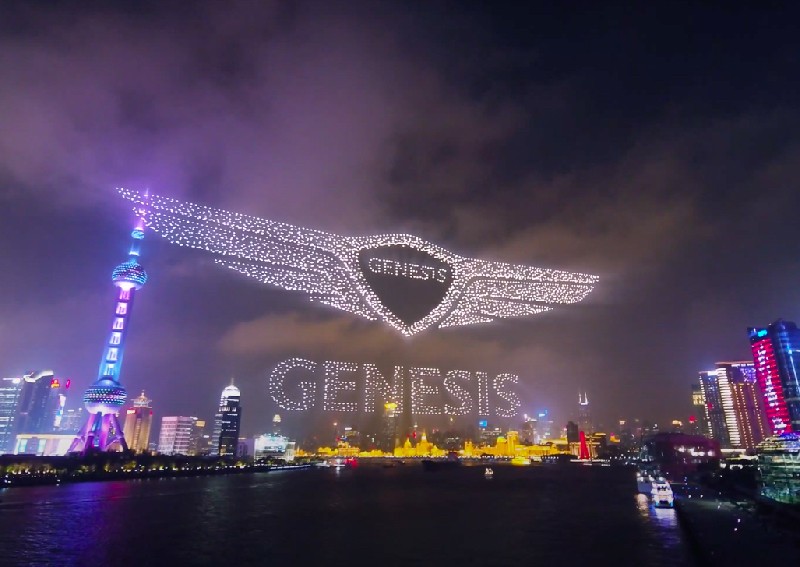 Hyundai’s luxury vehicle brand Genesis used 3,281 drones to create its logo over Shanghai’s skyline on March 29th in celebration of the brand’s arrival in China. That number of drones sets a new Guinness World Record for “The Most Unmanned Aerial Vehicles (UAVs) airborne simultaneously,” according to a Genesis press release.

Anyone who has piloted a single drone will realise just how incredible the feat is! Where do you actually begin when attempting a record like this? And where are all the pilots positioned? It looks like CGI trickery or a gaming video, but it’s not. Each individual pinpoint of light is a single drone, going about its business.

Genesis also made a video that showed off some additional drone formations, including a hand, two of the company’s cars, and… a double helix? What the!?

Genesis’ record edges out the previous one held by Shenzhen Damoda Intelligent Control Technology, which used 3,051 drones in a display on September 20th, 2020. Here’s a video of that display, which is incredible!

Intel held the record previously, using 1,218 Shooting Star drones to create the Olympic rings over Pyeongchang for the 2018 Winter Olympics.

If you like the idea of piloting a drone, take a look at Ebuyer’s range here.