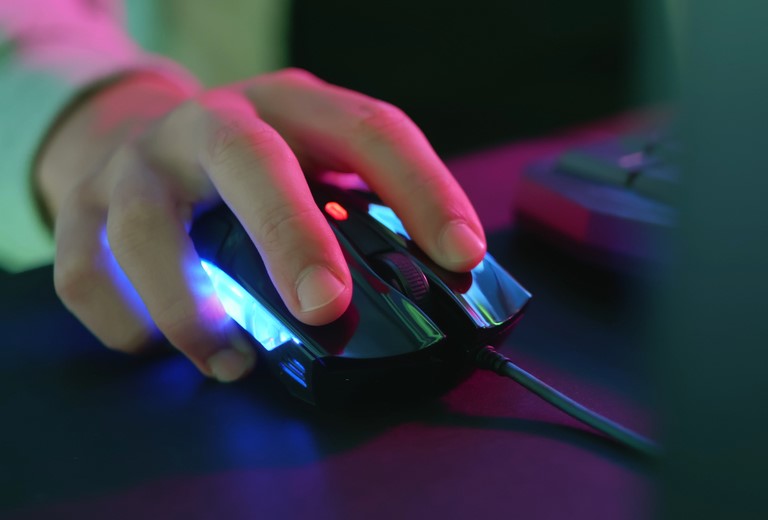 It’s not just a bling version of a regular mouse! There are genuine differences between a standard mouse used for general computer tasks and a mouse for gaming. In this new edition of our blog we’ll look at what those differences are, and why the gaming mouse was developed – and, of course, how owning and using one will benefit your play. By the end of these 600 words or so, we reckon you’ll know your gaming mouse!

What is a gaming mouse, in a nutshell?

We just said a mouse for gaming is different to a standard mouse – and it is. But it’s still actually ‘a mouse’, so there are obviously some very close similarities. Essentially it’s the same size and shape as an everyday mouse and can be used in roughly the same way – it’ll do the same things. But it’ll do much more, too. A gaming mouse will have been designed in a much more ergonomic fashion, and will also have an array of additional capabilities specifically designed to make it much more suitable for serious (or even casual) gamers.

So what are these extra functions you’re banging on about?

These functions include programmable buttons and RGB lighting. Okay, so the lighting is an aesthetic thing rather than specifically a function – although on some models it can change in response to gaming action. But the programmable buttons? Essential in gaming – and we’ll explain why shortly. Other ways a gaming mouse differs from a standard mouse are that it has higher sensitivity and faster response times. Essentially it’s geared up to make your gameplay so much easier and so much faster as it will respond to your movements and ‘inputs’ with much more speed.

Okay, so how do these programmable buttons work and how can they help me?

Programmable buttons mean that certain elements of your gameplay can be taken for granted or will become second nature. Certain configurations and sequences of button pressing and keyboard work can be compounded into one simple action by programming the mouse.

Effectively, by doing this you are replacing a series of complex keystrokes, so during your gameplay this obviously means you will cut down on the faff and accelerate your form! Imagine being caught up in some really intense gaming action and then needing to perform a certain routine or sequence of off-screen inputs? Your concentration would be snapped in a split-second, losing you the edge on your opponents. So, obviously, a programmable mouse provides a serious advantage.

Is it just the programmable buttons that make a gaming mouse faster?

It’s not, actually. DPI is pretty essential in making gaming mice faster. Here’s a bit about what DPI is and how it works.

DPI means Dots Per Inch. It’s a common term used when talking about resolution of imagery (images being broken up into dots – have a good close look, under a microscope if necessary)! In gaming mouse terms, the DPI is to do with the sensitivity and responsiveness of the mouse. The higher the DPI then the more the mouse will move with less force or pressure from your hand. Higher DPI settings are good for fast movements during gameplay, and you can move your ‘cursor’ (or gun or whatever) from one side of the screen to the other which much less physical movement on the mouse itself.

A mouse for gaming is usually capable of switching between DPI setting during gameplay – so you’ll be able to go into a different mode with no more than the flick of a button. The benefit of this is, obviously, that you are gaining more and more control over your movements during gameplay.

So should I invest in gaming mouse?

Of course you should! If you’re a serious gamer – or even a casual gamer who just wants to gain the advantage over opponents – then alongside a gaming keyboard, a gaming mouse is the big piece of kit which will give you the edge. It will seriously improve your gameplay. Have a browse of the Ebuyer website and see if you can find the right gaming mouse for you!

What is the NVIDIA Shield and what does it do?
In Defence Of Gamers and Computer Gaming (or: A Brief History)
To Top