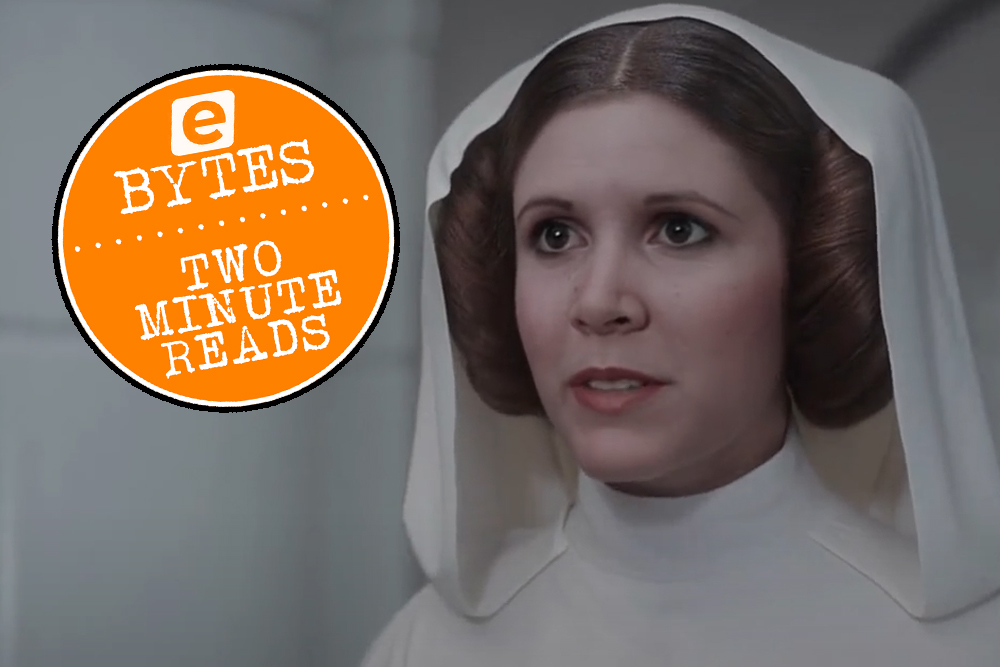 In very recent times the Star Wars spin-off properties Rogue One and The Mandalorian have both featured CGI versions of narratively important characters. The ‘believability’ – and therefore success – of these digital representations has been open to debate. And, boy, has there been a lot of Star Wars debate out there in cyberspace.

The challenge for the makers of the Rogue One film and The Mandalorian TV series was to ensure that the CGI renderings of these enormously recognisable faces appeared in a way that made the audience believe the actual actor was on screen rather than a ‘cartoon’ version. Or, at the very least, to a level of quality that didn’t distract or jolt the viewer out of total immersion in the story.

Frankly speaking, the original CGI versions just about ‘did the job’ but they were not completely satisfactory. If you know your Rogue One, for instance, you’ll recognize that our header image is a significant ‘improvement’ to the appearance of the film’s final shot. We’ll get to how that can be in a little while.

It would be a challenge for any studio to recreate actual actors, but Lucasfilm’s special effects department – Industrial Light and Magic – has long had the dab hand at finding solutions to problems.

You only have to look back at any of the original Star Wars trilogy to see how intelligent invention has long been a core tenet of the company’s work. As the decades – and filmmaking – have advanced, the reliance on actual physical effects has diminished somewhat, and computers have become an integral part of the filmmaker’s toolbox.

Lucasfilm’s work on Rogue One and The Mandalorian seems to have been the best it could possibly be when constrained by computer capabilities and (probably) budget. The combination of pressures there means that even only a year or so on, Luke Skywalker’s appearance in the last episode of The Mandalorian seems dated and underwhelming.

Obviously, developments in CGI work move at a rapid pace. But the Star Wars empire (now owned by Disney) may now have found the key to unlocking a long term solution. “Over the past several years ILM has been investing in both machine learning and A.I. as a means to produce compelling visual effects work,” a spokesperson said. “It’s been terrific to see momentum building in this space as the technology advances.”

It’s not just the tech, though. It’s the people too…

The legendary studio recently hired a YouTuber who specialises in deep-faking. Shamook’s online work has included ‘fixing’ elements of Rogue One and The Mandalorian. In addition, and in a way most stunningly of all, he replaced Alden Ehrenreich with original Han Solo actor Harrison Ford in a few scenes from the film Solo. This has been enough to land him thousands upon thousands of views on his channel and a job at Lucasfilm as Senior Facial Capture Artist.

So, although it’s not clear whether Shamook’s work will make its way into future re-released versions of the sci-fi fantasy film and TV series, it’s entirely possible. There is precedent. The Star Wars universe is no stranger to upgrades and multiple versions and the original trilogy has been upgraded a few times. Series creator George Lucas was well known for tinkering in an effort to perfect.

So it’s possible that the original CGI versions of Tarkin, Leia and Luke will slide off into history. Even if they don’t, one thing is certain – for all their faults they’re far less irritating than The Phantom Menace’s CGI character Jar Jar Binks! Hmmm. Perhaps there’s something Shamook can do to sort that blighter out!