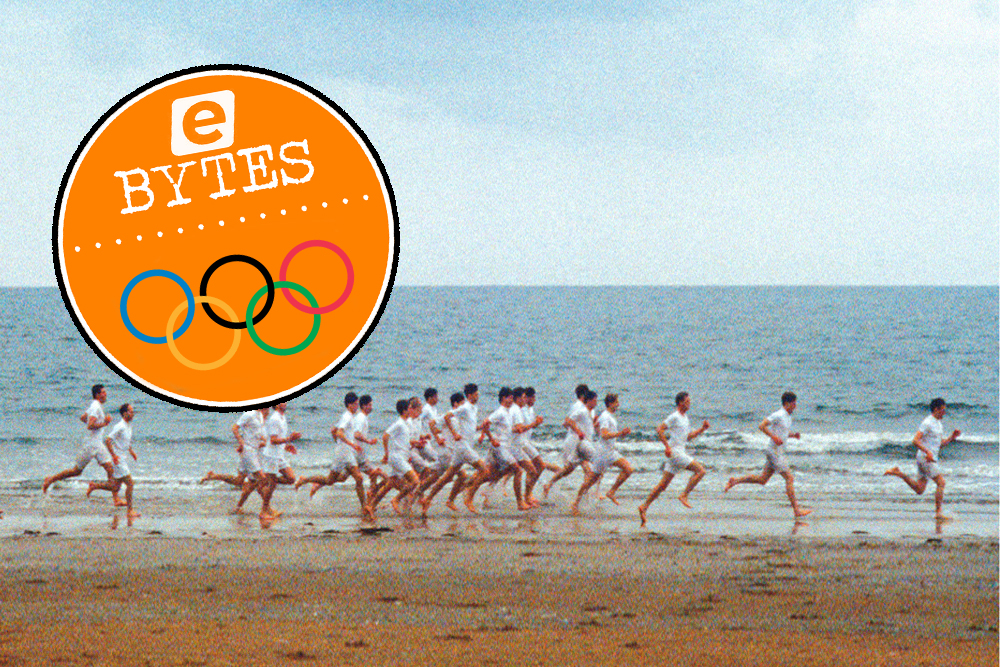 The Olympics are coming up very soon and, as ever, it’s a safe assumption that almost all of the events will be televised. If you can’t wait for the Games to start and you desperately want a fix of inspiring sport programming in advance, there are plenty of films which are connected to the Olympic Games in some way. We’ll run through our top seven here – all of them are based on actual people and events. And, of course, you’re going to need something to watch these films on! So we’ll suggest a best value TV for each film, too…

Our favourite film to feature the Olympic Games is CHARIOTS OF FIRE, which won multiple Oscars in its day. This 1981 British film enjoyed a budget of just $5.5 million and went on to gross $60 million at the box office – and it endures to this day. There is that truly iconic cinematography – the runners on the beach – and some ethereal electro music by Vangelis which act as a sort of calling card for this steadily-paced story of two British runners competing in the 1924 Olympics. As well as the sport itself, the social constructs of the time are examined in this classic based on a true story. Eric Liddell is a devout Scottish Christian who runs for the glory of God, and Harold Abrahams is an English Jew who runs to overcome prejudice.

And yet another true life story, Margot Robbie stars in this (exaggerated and not entirely factually accurate) account of the Tonya Harding / Nancy Kerrigan ice-skating scandal which marred the run-up to the 1994 Winter Olympics and proved that, sometimes, truth is stranger than fiction. An assault on Kerrigan by associates of Harding ruined the latter’s reputation and career, and this film is a riveting retelling of her fall from grace. Robbie is spectacular and director Craig Gillespie owes a debt of gratitude to Martin Scorsese’s cinematic style.

Also a pretty serious but life-affirming film featuring the Olympics, this. Jesse Owens is a name which resonates down through not just Olympic history but also social history. He was an African / American track and field hero who won a record-breaking four gold medals at the 1936 Berlin Olympic Games in Berlin and upset Adolf Hitler in the process. Oh well. Stephan James is pretty good as Owens in this 2016 telling of the story.

You wouldn’t usually associate Steven Spielberg with sports, and 2005’s Munich is only ‘sort of’ a sport film. It’s wider in scope. It deals with the fallout from the shocking events at the 1972 Summer Olympics in Munich, when Palestinian terrorist group Black September killed 11 members of the Israeli Olympic team. Munich doesn’t quite hit its target as a classic – but, as you would expect from Spielberg, in and of itself it’s something special.

Cool Runnings is a Disney-backed 1993 American comedy loosely based on the true story of the Jamaica national bobsleigh team’s Olympic debut in the 1988 Winter games in Canada. It’s become a bit of a cult classic in the three decades since it was released, and it’s not hard to see why. Cool Runnings celebrates the moral importance of how the game is played as opposed to the winning-is-everything philosophy so prevalent in much of life.

Okay, so Taron Egerton achieved much more acclaim for his biographical performance as Elton John in Rocketman, but he’s also brilliant in this film about Michael Edwards. “Who?!” we hear you ask. Eddie The Eagle, that’s who. In 1988 Eddie became the first person from Great Britain to compete in the Olympic ski jumping event since 1929. Fondly remembered for his wholehearted enthusiasm and determination, Eddie was also… well… not very good at his chosen sport. To be truly fair to him, that’s in relative terms… Anyway, this 2016 comedy drama is well worth a watch.

It’s one of those quirks of cinema, but in 1998 there were actually two films released which picked over the life and early death of Olympic running sensation Steve Prefontaine. This is the better one. The far better one. Billy Crudup is nuanced and intelligent in the lead role as the distance runner, while legend Donald Sutherland is immense as Prefontaine’s trainer. This film has soul.

If you read this early enough you might just have time to get yourself a new TV and watch all seven of our recommendations before the Olympic Games start. If not, don’t panic. Watch the games and then take in the films afterwards at your leisure. Life’s a marathon not a sprint, remember! And take a little bit of time to check out Ebuyer’s many other best value TV sets at the website.