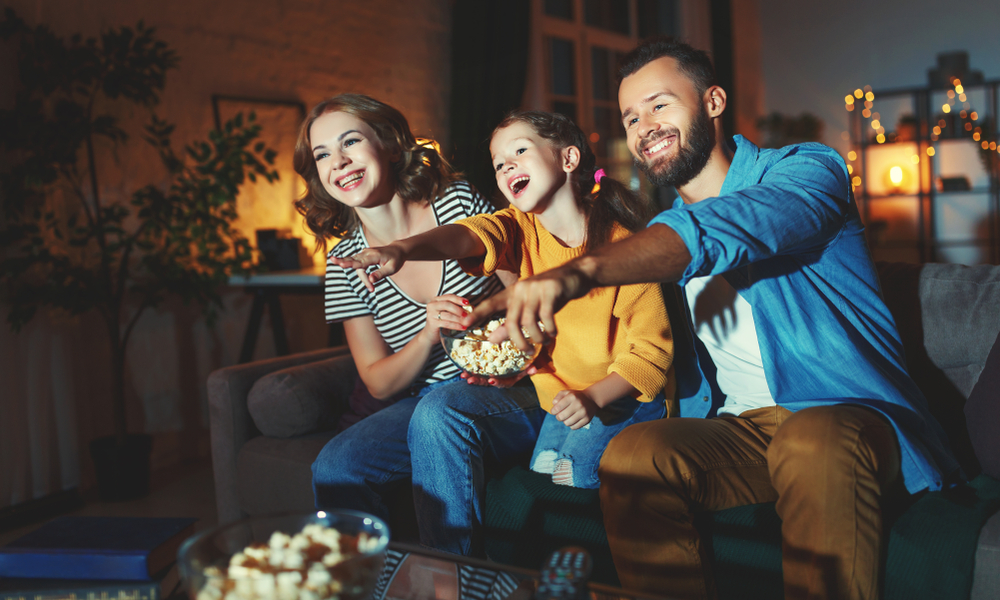 There’s nothing like kicking back on the sofa and enjoy a big blockbuster in your own living room. TV is one of life’s pleasures – and immersion is key. So when the thing you’re watching was designed to be seen at the local multiplex, can a home set-up really do it justice? Can you make your living room into a cinema?

Yes, you can! You definitely can make your chill-out space into a pretty special viewing set-up, and in this blog we’ll be explaining the bits of tech you need to get the most from it, and enjoy those big-screen moments from the comfort of your own sofa…

No longer will you have to try to cope with the bloke further along rustling his sweet wrappers. Or someone in front standing up and blocking the screen as they shuffle off for a toilet break. Or those no-marks behind you talking all the way through a crucial bit of dialogue. Well, hmmm. Actually you might – but let’s not get into domestics!

So what tech do you need? Obviously the first one here is the main one, but there’s also an interesting second option too – bear with!

When you’re intent on setting up a cinema-style living room, you might think that it’s only size that counts. And when we say “size” we mean “how large can you get?” rather than anything else. Your brain might be telling you that cinema screens are massive so when you’re after a new TV, the bigger the screen the better the experience?

Well (surprisingly but logically), that’s not actually the case. You don’t want to put a massive screen in a small room as you’ll be sitting right up against the screen, and there’s not that many films designed for IMAX-style viewing!

What you should be most concerned with is comfort. Making sure that the size of TV you invest in suits the size of the room you’re going to be putting it in. It’s all about distance and size and there is a mathematical formula for optimum TV size. It is:

Don’t sit too far away…

Similar to the giant screen / small room thing, don’t sit too far away and don’t opt for a small screen if you’re lucky enough to have a massive room. For a start you’ll miss all of that wonderful HD or 4K quality. Plus, if the TV screen is only a small part of your frame of vision, you will end up being distracted by the things around the TV –a bookshelf, lamp or record player, for example. This irrelevant stuff your eyes see becomes extra info your brain has to process and will subconsciously distract you from that bit when Uma Thurman and John Travolta really show the Strictly wannabes what’s what!

So, flipping the coin on this, sitting too close to your set will also wreck the experience. You’ll be able to see individual pixels or horizontal bars where pixels align. If you’re too close to a big screen you won’t be able to see the whole image, so you’ll miss things, and it could even be disorienting. It’d be akin to sitting in the front row at the cinema, and if you’ve ever done that then you’ll realise it’s really uncomfortable.

So what sort of TV should I go for?

Now we’ve got the screen size / room size conundrum out of the way, let’s briefly talk about the important technical features of the TV sets you’ll be able to choose from.

You probably want to go for a 4K TV as this is just about the best that the consumer market currently has to offer. Once it is set up correctly it is a guaranteed brilliant picture. More and more content is filmed in 4K – even some TV shows – so you’ll be getting ‘the best’ on most things you decide to watch. If you’re not sure exactly what 4K is and what benefit it will have for your viewing experience, you’re going to love this next bit…

What exactly does 4K mean?

‘Regular’ HD TV has a resolution of 1920 by 1080 pixels, but 4K has four times as many pixels. With 4K TV there are 8 million active pixels on screen. In the amount of space that a HD TV holds a pixel, a same-sized 4K TV can hold four. So that’s four times the number of pixels than on the ‘regular’ HD we just mentioned. This massive improvement in the number of pixels means that 4K is much sharper than HD. When you’re watching the shark coming in on Quint, you’re going to see so much more exciting detail.

4K becomes more obvious on TVs of about 36” and above, but here’s something else handy to think about… Some TV manufacturers build ‘upscaling’ into their TVs. This means that HD and lower resolution things are artificially upgraded to 4K. The results are not as good as proper 4K (you can’t put additional detail where there isn’t any) but upscaling does give you an improvement.

Onto the second option, for those who have the space…

Projectors mean you can watch your shows and films on a screen of around 100-inches and larger. Now That’s What I Call Home Cinema! You will, of course, need a room big enough so that you can position your projector the right distance from the wall you’ll be projecting onto.

Projectors have HDMI sockets for high-definition video equipment (Blu-ray players, games consoles or a digital TV box). You can view photos from USB sticks via the projector’s USB ports, or you can hook up a PC or laptop using the VGA monitor sockets. Basically, you can watch anything. Don’t forget that to get the most out of your projector in a home cinema set-up, you’ll need to draw the curtains and switch the lights off.

Projectors at Ebuyer – check out our range

What else do I need for a home cinema?

Okay, we’ve got the big one out of the way. The TV is obviously the centre-point, the focus, the big cheese, the daddy-o, of your whole set-up. And a projector is a possibility. But there are other things you should definitely invest in if you want to maximise your cinema-style experience. Let’s run through them here…

You know, when people have been to the cinema and then talk about the films they love, it’s a given that they’ll mention the cinematography. They’ll say things like “it looked incredible” or “the special effects were amazing”. Obviously because our eyes tend to be the most immediate method of receiving information, and because cinemas are sumptuously visual, and also because films aren’t radio, of course, then the audio part of the cinema experience is sometimes taken for granted.

But the audio element in films, particularly very well made films, is a massive part of your enjoyment. Think about watching JAWS without that incredible menacing music bubbling up around you. Think about the T-Rex / Jeep chase in Jurassic Park without those initial deep thuds of the dino’s Dr Marten boots! And so on and so on… The history of cinema is littered with incredible moments of audio – so in a home cinema set-up you’ll need to make sure you can cater for this. A soundbar, a good one, is the perfect way.

What is a soundbar?

It’s an external speaker which amplifies the audio from your TV. It bypasses the TV’s built-in speakers and offers improved audio quality. Although the speakers integrated into TV sets these days are of very good quality, you will still get a more well-rounded sound from a soundbar – particularly if it comes with a larger ‘woofer’ (that’s a bass speaker, all-important for accurately delivering all those rumbles and thuds).

Soundbars have different settings which can be tweaked to deliver what the film or TV show’s audio designers intended. They can be ‘attached’ to your TV via the traditional ‘wired’ method or even via Wi-Fi. Check the individual specs of the soundbar you are interested in to see exactly how it could fit into your home cinema set-up! So – check out Ebuyer’s stock and then once you’ve made your purchase and it’s arrived, that’s it! You’ve got a home cinema and you’re all set, ready to take in a quality film in the best possible way.

As we said at the top, kick back and enjoy! Don’t forget Ebuyer stocks plenty of other tech!