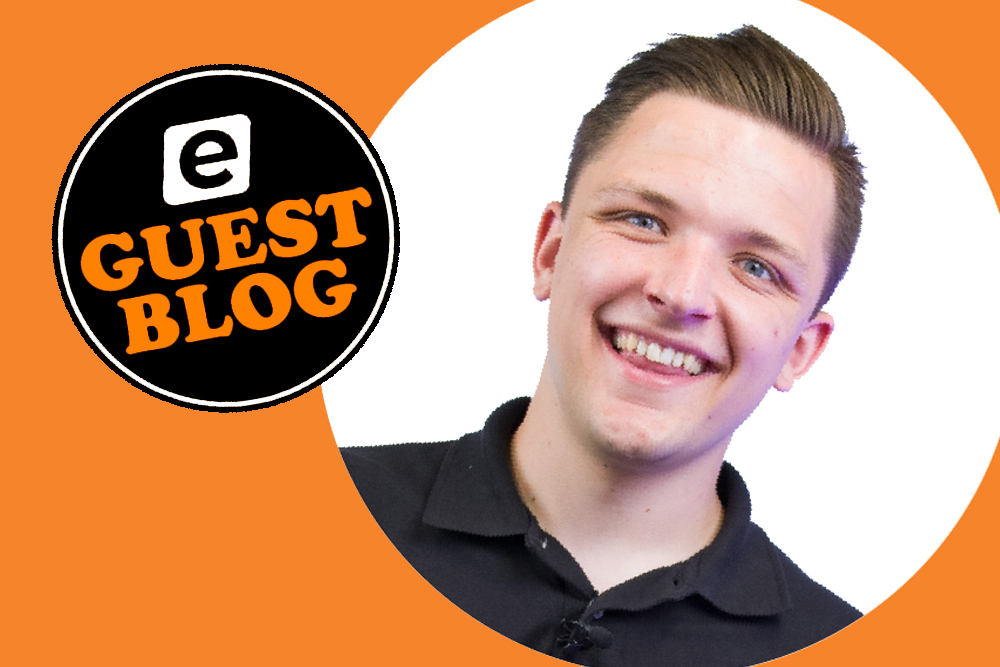 If you’ve visited our channel and seen any of the videos we have produced over the last few months, you won’t fail to have been impressed by our very own Adam – plus of course James, prestigious guest presenter. James is actually the owner of his own YouTube channel GeekaWhat which, over the last eight years or so, has built a solid reputation for enjoyable content which offers astute product reviews, useful build tips and so on – in fact everything tech!

In partnership with Ebuyer James has brought his expertise and opinion to our own videos, and there are a few of them available direct to watch in this article. We thought it’d be a good idea to catch up with him and hear him tell the GeekaWhat story in James’s own words – beginning with the burning question of where did that funky name come from?!

At school I’d sometimes get called a nerd or a geek. When I was setting up my YouTube channel I thought I’d ‘own’ the name!

At first the channel was all about answering the tech questions people have, so that’s where the ‘what’ in GeekaWhat comes from. I was going to call the channel something like ‘Embrace The Geek’ – but I thought that was just a step too far, ha ha!

Shop for laptops at Ebuyer

I wasn’t ‘the most popular’ at school. I wasn’t ‘in with the in-crowd’, but I liked to think that I got on with everyone. People are nice, right? So I just got on and had fun and kept it pretty simple.

I’d say that in my schooldays I was a fanatical gamer, but I think I was more of a fanatical tech lover than anything else. I just loved technology – whether it was the cheap microphone my parents gave me for Christmas, or the next phone or the new laptop. I bought a PS3 when I was in Year 7 or Year 8, and I’d have my friends round to play GTA – ‘cos their parents wouldn’t let them have it! I eventually got Mac and then a PC that I built that I played games on. So, yeah, I was pretty fanatical for both gaming and tech.

In the beginning my GeekaWhat videos were really ‘tutorial based’. That was okay – there was nothing that people could really take the mickey out of. Then I actually started bringing myself into the videos and that’s when, I think, it started getting harder at school. Your Maths teacher would go out of the classroom and someone would put them on the whiteboard… That was quite difficult!

Shop for desktop PCs at Ebuyer

I think the ‘influencer’ word is a bit of a difficult one, but I do sort of consider myself to be one. I think some of the press use that word negatively. I mean, when you’re put into the same bucket as someone on Love Island – which is completely fine, a perfectly legitimate way of growth – but the tech videos we do are completely different to that. I think we do, in some sense of the word, influence opinion.

People don’t talk about this very much, but it is obviously a huge factor. There’s always rivalries between influencers. I think it’s good to be friends with people in your circle, but because you’re doing similar things I think you look to what each other is doing. I think everyone does this. You look at them and see whether they’re being successful or whether you’re beating them, or whatever.

I am friends with other influencers in our space but I actually try to keep my social life normal. I’d go on trips with influencers, but I think there’s an incredible amount of value in friends that you’ve had for years and years, friends that you’ve grown up with. They’re the ones who were there before any of this. It’s kind of a ‘Day One’ scenario, right?

I think if Tik Tok had been my generation, as in the platform when I was growing up, I don’t think I’d have found success there. The tech on YouTube was a guise to hide behind, it’s very much about the thing, whereas I think Tik Tok is very much personality driven. So GeekaWhat do some Tik Tok now, and I enjoy that, but I don’t think I’d have had the confidence when I was eleven-and-a-half, twelve, thirteen… That platform’s a bit brutal nowadays!

You won’t see GeekaWhat doing a sponsored Instagram post here and there, or anything like that, as we’d rather have a deeper and longer relationship. One that everyone can see the value in – including our audience, not just us and Ebuyer. It’s a win / win. We want to recommend things that are good.

I’m a really big believer in those partnerships with brands, because in the influencer world it’s easy to end up chasing the quick win. Go back to the Love Island thing, you see lots of one off sponsored things, and we don’t want to do that. We want to really sculpt something that our audience can believe in. A 100% genuine approach.

Shop for monitors at Ebuyer

Two or three years ago I might have thought we deserved more views or subscribers, but I think if the videos had been more popular I would have blown the opportunity, because the videos weren’t good enough. I think YouTube is quite merit-driven, and I think things happen for a reason – so as much as there are mistakes I would avoid, looking back, I’m now quite glad I made those mistakes. It’s a learning curve that prepares you for the next level and for the stress of when you have a really large audience. GeekaWhat’s not there yet, but I know we’re prepared for the day we have a big audience.

Really, at the start I just chased the views. I was obsessed with getting views on my videos. I started making music track lists and they would get views. I started making PC build videos ‘cos they would get views. Eventually I used the money I’d earned from those videos to make the future videos better, and started building them up into legitimate bits of content that people wanted to watch, as opposed to something they’d just stumbled on and clicked off after ten seconds.

I’ve progressed and jumped to a million views a month. The GeekaWhat channel has grown from zero subscribers to 100,000, completely organically. I’ve never had a big shout-out from a huge YouTuber or anything, it’s all been my own growth and that’s something I’m quite proud of. It’s been a bit of a climb, and I’m ready for the next step now.

I think it’s really easy to look back and say “I could have done this differently and then this would have happened” or whatever. But I’m quite a firm believer in the idea that things are meant to be. I think there are so many lessons I’ve learned.

Shop for peripherals at Ebuyer

The team that I’ve got behind me, working with me and for me, making content, they’re a big part of things. Having a GeekaWhat team around me who can vet the decisions I make, who can ask the questions like “should we be making this video?” or “is this a good fit for us?”, it’s important. It keeps you grounded and it keeps you normal, I think.

I moved into my first studio in March last year, I then employed my first member of staff in September and there are now four of us. Having my own studio and my own full-time paid staff happened almost by accident. I took on an editor to help me, before that I’d worked with people editing remotely, and once he was onboard I figured out that I actually needed more help.

We were turning down work, we were busy, and I was worried that when Jake, the first member of the team to join, went on holiday we wouldn’t be able to make any content. So then I took on a second editor, and then I realised that we had other problems to sort out. Our brand deals, for one.

Our brand deals, at first we didn’t have time to work with them and do all the ‘back-end’ side of things as well. So I took on Harry, who does some of our Account Management. It’s all happened almost by accident. I am someone who is very keen on growth, but it’d have been easy for me to stay doing it on my own. I think putting a team together was a risk, because there are so many elements to it, but I’m ambitious. It was the only way of getting to where I am now.

I wouldn’t say it has paid off yet – but it is definitely paying off. We’ve grown from about 70,000 subscribers last September to around 110,000 now. I think that’s a huge testament to putting the GeekaWhat team together. Personally, I don’t have my work / life balance completely sorted yet – but it’s a lot better than what it was. I wouldn’t be able to have that without the team.

My work with Ebuyer came about because of a chain events that was quite cool. An industry contact recommended me to another industry contact who then recommended me to Ebuyer. I spoke to some people at Ebuyer and picked up a great vibe. I probably sound a bit biased but I do think Ebuyer sell some great product lines at great prices, and that’s something that I wanted to share with my own audience.

We partnered or worked on kind of a trial basis, initially, which was my decision. I wanted to make sure that both of us were happy with the value and the relationship. After that we were both keen to sign a 2021 partnership which will hopefully last beyond. For us it was about making sure the relationship was right. We’d wanted to align ourselves with a UK retailer in the tech space, and Ebuyer was perfect for that. It’s about having partnerships that are of benefit to both. That’s how long term businesses are run, and everyone has more fun that way as well. It’s also about us providing value to our audience.

I’m only 19, nearly 20 – I’m getting there! To be completely honest with you regarding my long term plan, I don’t exactly know where it’s going to go yet. I’m sort of waiting to see how things play out.

Long term I’d like to have a media business with lots of different channels, or doing video production work whether that’s adverts for TV or social media. We’re also really interested in social media strategy for brands, and we’ve been doing a bit of that locally, where we’re based in the Midlands.

There are actually lots of different avenues and I really have to restrain myself because there are lots of different things I want to try out now. Eventually GeekaWhat will try and become a wider media business. But at the moment it’s about focusing on the core business, getting workflows, getting people in, and really making that work.

And about partnering up with Ebuyer, of course!