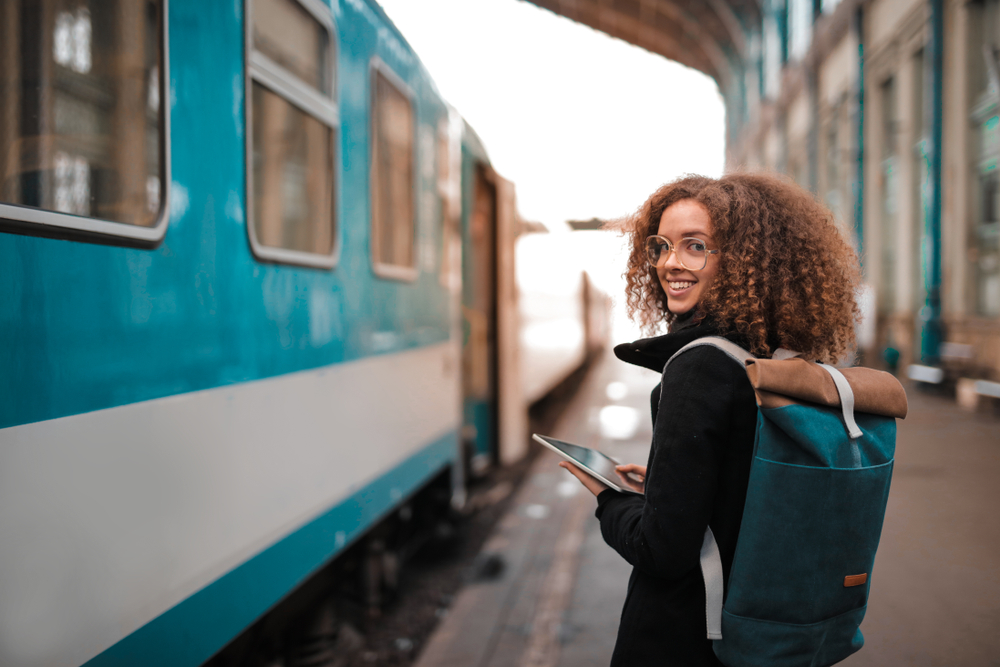 If you’re a student taking a gap year from university or someone who spends a lot of time either on or waiting for a train, then you’ll probably spend a fair amount of time whiling away the hours on tech. We’ve put together a selection of tech items which will help your journey be more comfortable and enjoyable.

So, you’re on public transport to some far-flung place… and you’ve run out of battery power. Most trains have power points these days but, depending on where you are, you may need an adapter to take advantage of the free power! Let’s take a look at some options…

In the UK we have triple-pronged plugs – but in Europe it’s a dual-pronged plug that’s used. You can get UK plugs which have a European adapter built-in, or you can buy standard European adaptors (your 3-pin plug will plug into the two-pin plug, which then plugs into the power-source). If you’re overseas and on the train, you’re going to need a reliable adaptor for using your tech and recharging batteries.

But what about America and Canada? Yes, they’re different too. In both these countries, the plug has two flat prongs as opposed to the round prongs in European plugs. Also, North American devices are designed to function with a lower electrical voltage (110/120V) than devices from most other parts of the world (220/240V).

Some all-in-one travel adaptors are made for Europe, North America and Australia. And several models have built in USB ports and surge protectors. Check out which countries you’re planning to visit and choose your adapter accordingly.

IMPORTANT: Many travel adaptors are designed with 110v devices in mind, which means they are not recommended for higher-powered appliances such as hair dryers or flat, clothes irons.

A tablet PC is a portable computing device with a touch-screen display, which is internet enabled. That means you really need Wi-Fi access to get the most out of a tablet. Generally smaller than a notebook computer but larger than a smartphone, tablet PCs are designed to be thin and light, and have downloadable apps.

Instead of using a keyboard, tablets are operated by touching the screen. Some tablets have a facility where you can attach a physical keyboard if that’s what you prefer. However, you will have to purchase a keyboard separately as they are not supplied with tablets. One of the main things about tablets is that they are perfect for travelling – especially on the train where space will be at a premium.

Everyone’s heard of the Apple brand, and an iPad is the name for Apple’s line of handheld computers. Apple has its own Operating System called iOS and all iPads run on this system. iPads are generally easier to use and run smoother than tablets, although much of the time the difference is barely noticeable.

In terms of overall user experience, Apple’s iOS is clearly ahead of Google’s Android OS system for the average user. Apple’s operating system is extremely easy to use, powerful and has an intuitive interface.

iPad enables close integration between devices. You can cut and paste between your iPad and Macbook if both are running the latest Operating System. Android tablets are way behind in this area.

Everyone knows that the App Store includes virtually every downloadable app you can think of. It currently has in the region of one million apps specifically designed for the iPad. Another million are capable of running in compatibility modes.

Both tablets and iPads are great for travelling!

When you’re travelling in trains, you’ll need a decent bag to transport your tech. OK, a bag isn’t technically tech in itself, but laptop rucksacks are extra-padded and sturdy, ready to take all those bumps and scrapes. Many designs now also have USB charging ports!

The job of a power bank is to recharge battery-powered electronics when you’re on-the-go! A power bank can be small enough to fit in your pocket or can be larger with a higher capacity. Power banks are used to charge mobile phones, tablets, speakers, and even laptops! If you can plug it in a wall to charge, the chances are a power bank will also be able to charge it. They’re always useful to have, as you never know when you’re going to run out of power.

Noise on the train can always be an issue – especially if there are screaming youngsters out of control! Having a good pair of headphones – noise cancelling headphones if possible – is a necessity! Enjoy your journey in your own little world!

Wireless earbuds or Apple earpods are another piece of fabulous tech which are tiny, yet provide respite from the masses – plus entertainment! Features such as one step pairing, touch control, wireless charging and bluetooth 5.0 enhancements are making them easier than ever to use – and, importantly, sound better than ever before.

Corded earbuds can be a life-saver on the train for one specific reason – they will never run out of batteries! Bluetooth earbuds are an excellent alternative, but if you’re on the train for long distances, sometimes longer than anticipated, then losing your audio could well mean ‘hello boredom’!

Not just on the train, but pretty much everywhere you go, including the loo, a mobile is the first item on your list to take anywhere. We know that YOU know that, but we felt like we had to say it anyway!

So, there you have a selection of must-have accessories to accompany you on your train journey, whether that’s back to uni, or across Europe!

5 Essential student tech gadgets for Uni
Can you make your living room into a home cinema?
To Top