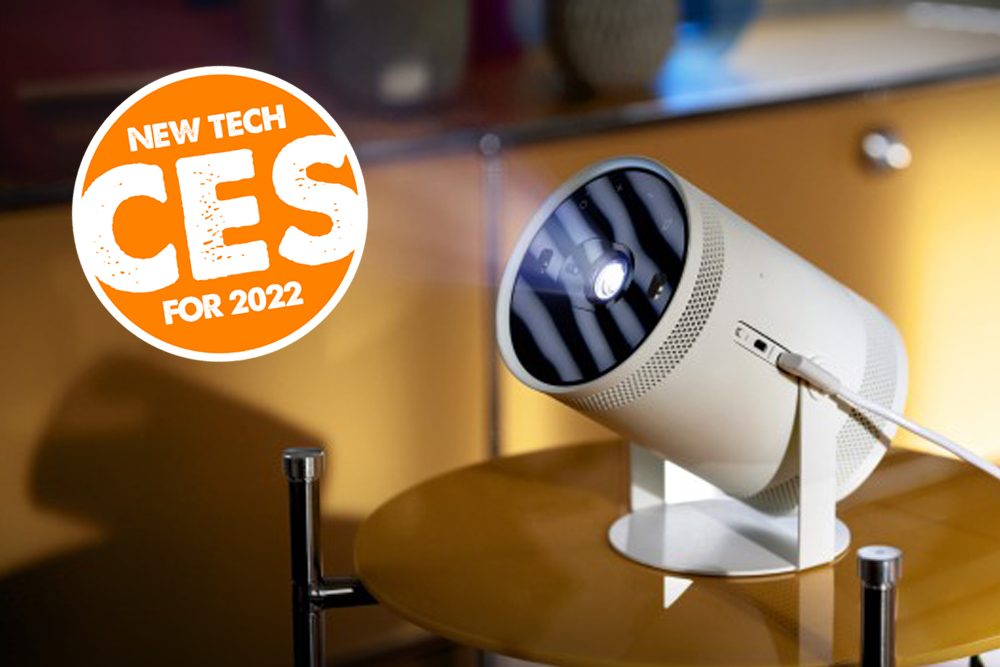 Over the next few days we’re going to be featuring some of the very best tech showcased at the recent CES show in Las Vegas.

At every CES show, there’s usually one product which captures the imagination of the public – and this year it was Samsung’s 1.8lb portable projector. With a price tag of around of $900 (approx. £700) it seems like an affordable luxury. What else can you get for £700 these days? A tank of petrol? A bucket of popcorn and a Coke at the cinema? Forget that! Your new entertainment buddy is here – right now! As long as you live in the USA, that is. There’s no news as yet about when it’s likely to arrive in the UK.

Is the ‘Freestyle’ a fantasy?

Many products showcased at the CES tech show never make it onto the market. A bit like those fashion shows where models wear all sorts of outrageous stuff that you’ll never see in the shops! But hang on a minute – the Samsung portable projector is actually coming out soon. That’s right, it’s not a dream, it’s a beautiful reality!

In two days, Samsung’s launch video wracked-up almost 1.5 million views on YouTube, so the signs are good for an instant success.

Anyway, let’s have a look at this brilliant new product.

It’s a small, lightweight projector you can take anywhere with you. Around the house, to your friend’s house, to university. Anywhere. The projector measures just 3.7-by-5.3-by-3.7 inches (without the stand), so it really is small and can fit into any travelling bag with ease.

Also, the projector comes with built-in support for the full range of Samsung’s Smart TV streaming apps, so you can watch Netflix, Disney Plus, Amazon Prime HBO Max and more.

The Freestyle doesn’t support 4K video – but don’t worry, you still get a detailed, crisp and brilliant picture. Samsung’s projector comes with a 180-degree cradle stand and can project content onto walls, screens or anywhere else from 30 to 100 inches at up to 550 lumens of brightness. It features 1080p resolution, as well as auto-focus and auto-levelling capabilities to automatically align its image to any surface. It can play music and includes 360-degree sound. We’re going dizzy with the excitement!

Samsung’s new projector is also compatible with external batteries. You can basically project anywhere, as long as you have a surface to project on to and Freestyle supports Wi-Fi and Bluetooth connectivity and a Micro HDMI port.

The Freestyle is the first projector to include voice control, allowing owners to use voice commands (via Samsung’s Bixby or Amazon Alexa) to control the device hands-free. Another cool feature is this: When you’re not using the Freestyle to project video content, you can set it to run in an ambient, mood lighting mode by putting the included translucent lens cap over the lens. …And relax.

Samsung don’t just produce amazing projectors. Check out some of their other products here.