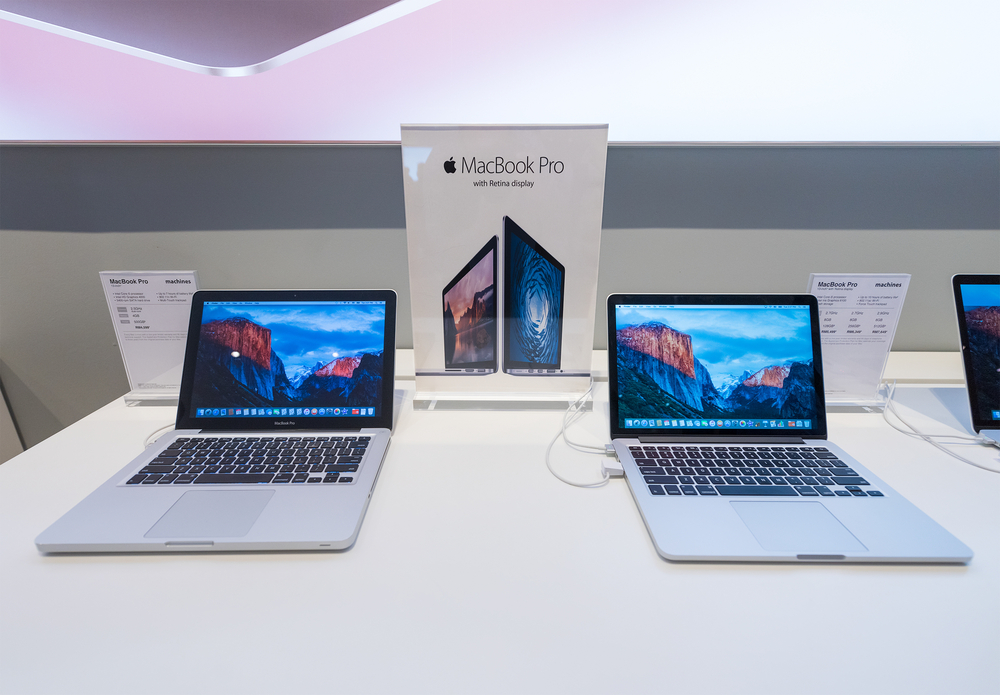 The main difference between MacBooks and laptops is that MacBooks all run on the macOS developed by Apple, while a Windows laptop runs on Microsoft’s Windows OS. But why do creatives and professionals tend to go for Apple rather than HP, Lenovo, Razer or any of the other leading brands? You’re about to find out.

What makes MacBooks stand out?

There is something special about Mac computers that really does make them stand out from the huge crowd of competitors. Over the years, Apple has certainly put a lot of time, effort and money into their branding and marketing – but let’s face it, it’s not so difficult to market a high-quality product is it? Their range of laptops (and desktop computers) is manufactured using only the very best components and they are all housed in the iconic Apple designs which are almost lovingly ingrained into our grateful brains!

So, what really makes professionals still opt for Apple when they’re looking for a high-quality machine to work on? It’s almost as if working on an Apple magically improves their work!

With all the options in front of you, it can be a massive challenge deciding what to go for. We’ve put together a list of reasons why pros still tend to go for MacBooks. However, it must be said that even though MacBooks are still superb products, the gap between them and the chasing pack is closing.

Why are Macs still number one?

Quality, quality, quality! You’ve probably got the message now. From the components to the construction, Apple have not scrimped on anything. MacBooks are designed to be durable, long-lasting and better than anything else out there.

The processors, graphics chips, power supplies and more, everything is optimum quality. Will all these combined, Apple are not just selling a laptop, they’re selling an experience. And that experience keeps getting better and better, as Apple continue to innovate. MacBooks are so good that even models which are a few years old still have more processing power and graphics capabilities to handle almost all professional tasks easily. That’s not something which you could say about most PCs.

Apple are a ‘small’ player!

How often do you see people working on Apple Macs when watching a TV series or movie? You’d think that the whole world had an Apple – but that’s not the case at all. Macs make up a fairly small percentage of the overall computer market, yet they are seen everywhere! And that’s because people like the image of them so much – and what it represents. Top-of-the-range success!

Apple computers are powerful and extremely versatile. But the skill is combining high-quality performance with user-friendliness – that’s the ultimate combination of functionality! You don’t need to be a tech nerd to get the most out of a MacBook. They are what’s known as ‘intuitive’ machines that are meant to be as easy to use as an iPhone or iPad. The ease-of-use is another factor which makes them an attractive option.

Whether you’re currently working at home or in the office, MacBooks are an excellent choice when you need a computer which is reliable, sturdy and can handle those demanding workloads.

When you’re looking to buy a new laptop, there are certain features you should look for, such as memory, graphic display and processor – plus, of course, you will also be influenced by the design and reputation of the brand. The physical design is last on the list we’ve just provided, but one of the best things about Apple is that they design and build their products with quality products all tucked away inside a beautifully designed chassis. The outstanding design is always going to appeal to creatives and business professionals, who appreciate the undeniable beauty and power.

If you’re thinking of buying a MacBook Pro but are still in two minds, here are some of benefits of owning one:

The best screen display of them all

If you were to read the reviews of the MacBook Pro, you’ll find that the holy grail has been discovered! The LED-backlit Retina display is hailed as one of, if not the best screens on the market. It’s a triumph of technology, a stunning, incredible screen which is one of the major selling points. And its competitors don’t have one.

High-resolution and high pixel density – this provides an outstanding user experience with extra sharp graphics and the text is crisp perfection! A whole range of professionals such as graphic artists, video editors and movie makers say this is crucial for the level of work they need to produce. They need perfect colour representation to produce work at their exacting standards, and they get it from the outstanding Retina Display. It’s also easy on the eye – as crisper images are known to help reduce eyestrain.

Apple’s LCD screens use a grid of “pixels”- the smallest possible dot whose colour can be controlled – to create all the text and graphics you see. If you look at an iPhone (iPhone 7 Plus for example) screen, then 401 pixels can fit in each inch. As the pixel density goes up, then the pixels have to get smaller – that stands to reason. If you looked at a 72 pixels-per-inch picture, you’d be able to see each individual pixel. With a higher pixel density, it’s harder and harder to see individual pixels.

Apple says a “Retina display” is any screen whose pixel density is high enough that someone with 20/20 vision cannot see individual pixels at the standard viewing distance used for that device. What does that actually mean? In simple terms, all this means that you’re getting a razor-sharp images and colours with Retina Displays!

The MacOS is one of the main reasons people invest in a Mac. What’s so good about it? Let’s take a look at some of the best features of the MacOS.

Firstly, let’s talk about security. The MacOS is less vulnerable to the many viruses and malware that are just dying to infect and damage your computer. No matter how good your device is, without strong security, it could soon be rendered useless.

If you already have an iPhone or an iPad, then you’ll find the transition to using a MacBook easy. The system – as we mentioned earlier on – is intuitive and ultra-user-friendly. You can also switch seamlessly between MacOS computers and iOS-running mobile devices. What this means is that you can start producing apiece of work on any iOS device and continue it on your MacBook without any hassle – giving you exceptional convenience.

One of the main reasons that people want a laptop rather than a desktop is mobility. But it’s no use having that mobility if your battery power is poor. A laptop should last you 2-3 hours on average from a single charge – and some can run up to 8 hours or more.  With MacBooks you get an impressive battery life. Both 13-inch models have up to 10 hours of battery life, while the 16-inch model is capable of lasting up to 11 hours. It’s worth remembering that the life of a battery isn’t just down to the charge. App usage, temperatures and lifecycle can all influence how long the battery lasts.

When Apple introduced the butterfly mechanism, it was a major step forward for peripherals. Now, there’s the “scissor” keyboard mechanism in the MacBook Pro which moves things on even more. It has a silicone layer which sits underneath each key and helps stop debris (small bits of food, etc) falling between the buttons. The scissor mechanism is also quitter and softer to press, making the experience surprisingly more satisfying.

With usability always at the forefront of the Apple designers, the MacBook Pro has a Force Touch Trackpad which gives you better control with its precise cursor control and pressure-sensing capabilities. The trackpad eliminates the need for a mouse, even when performing tasks such as editing photos.

They look and feel so good!

Apple have taken the time to produce a machine which embodies cutting-edge aesthetics. People aspire to own an Apple MacBook. There’s no doubt that there are some great laptops on the market which have similar price tags and can do everything you need them to do, yet in a choice between the two, Apple tends to be the most desired. MacBooks not only possess the ultimate in functionality, they also look and feel great!

All MacBook models are built to last. If you have a MacBook and look after it, then it should last you around seven years – or perhaps even longer. If for any reason there’s an issue with your MacBook (or, in fact, any other Apple product) then you can always take it into your nearest Apple store and let them have a look at it. For many people, this is a much better option that calling a helpline or sending it off in the post for repair.

Every single part of a MacBook

The great thing about MacBooks is that every component is optimised to work together, allowing the machine to run smoothly throughout its long lifespan. Standard laptops are usually a mixture of components from different manufacturers all put together within a body. This can lead to issues if certain parts fail, as they have different guarantees.

The original version ceased production for a couple of years up until 2014 and then it was relaunched with names such as the ‘New MacBook’, and ‘MacBook Retina’. There were big changes to the version launched in 2015 including the Force Touch trackpad (which gives the user extra features) and a butterfly mechanism for the switches on the keyboard. This mechanism makes the keyboard much thinner as less downward pressure is needed on the keys.

Also referred to as the MBP, the MacBook Pro is a little bit thicker than the standard MacBook and comes in larger sizes. Add to this much more robust internals, because it’s aimed at users who have very demanding and often complex workloads. Here, we’re talking about video editing, gaming developers and other professionals. The MacBook Pro was the first Apple computer to have a Thunderbolt port.

Apple decided to produce a ‘cheaper’, lightweight alternative to the MacBook, and the MacBook Air was the result of their labours. Because it’s less expensive, it has had to compromise, so it’s the only model which doesn’t have a retina display. Released in January 2008, the MacBook Air was the thinnest and lightest model in Apple’s range of outstanding laptops.

Apple MacBooks in a nutshell!

To answer our original question: Are MacBooks the go-to laptops for professionals? Well, the answer is yes, and here’s why in a nutshell. As a ‘luxury’ brand, MacBooks have high-quality displays, superior glass trackpads, and they are the best on the market in hardware and software. They also have fast solid-state storage memory (especially the more recent models), long battery life and they look AWESOME!

However, there are other manufacturers which are also producing outstanding laptops too! ASUS, Lenovo, HP, Acer, Razer, Dell and MSI to name a few. Depending on what you actually need your new laptop for, there are great options for you out there.

Take a look at Ebuyer’s MacBook range here. And click here to see the whole range of laptops we have in stock.