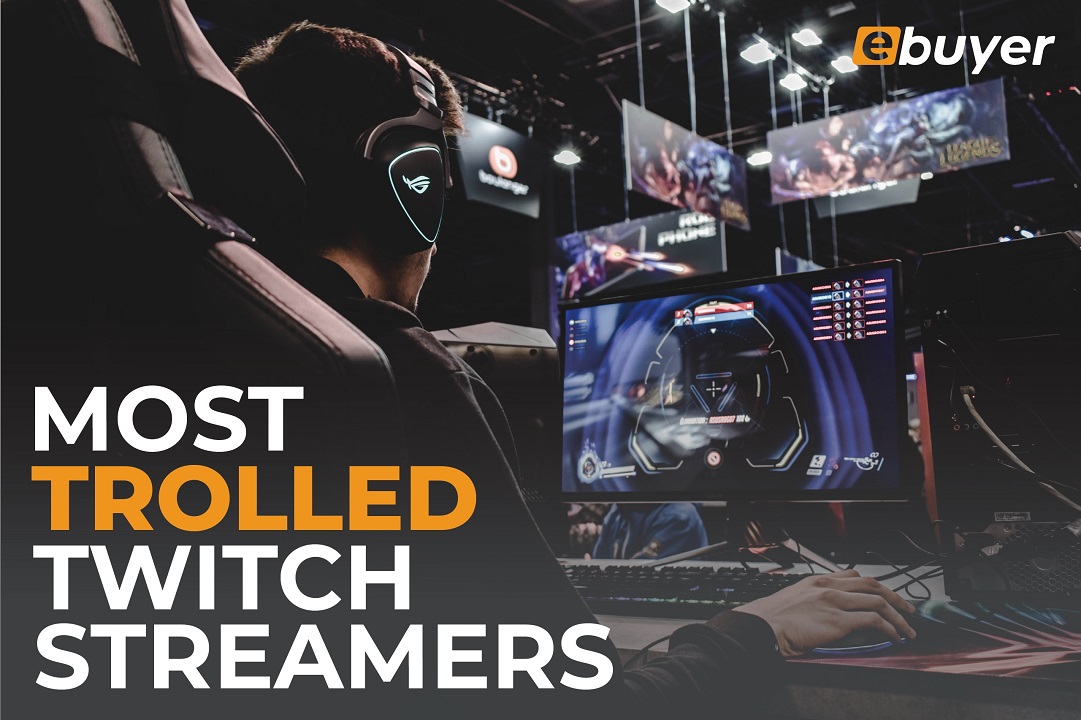 Trolls are hiding under every rock in the gaming world. To highlight how prevalent they are, we’re revealing the most trolled top Twitch streamers out there.

How do you like to unwind when you get home after a long day?

For most of us, there’s nothing quite like switching a console on and immersing ourselves in our favourite game, or sinking into the couch and booting up Netflix on our laptop to binge our favourite shows.

And for some, our idea of relaxing in the evening is to watch our favourite major Twitch streamers!

It hasn’t even hit its tenth birthday yet, but Twitch continues to be the most popular streaming platform online for esports and gaming. Not all of us can afford the most powerful computers or the latest games, so watching them on Twitch allows us to experience these games vicariously through our favourite streamers.

But like so many other social platforms, Twitch has a darker side. As with YouTube, Twitch has a rigorously active and relentless troll community.

Trolling is defined as deliberately provoking someone online to get a negative response, and no streamers are truly safe from it, especially not the biggest and most famous.

To find out just how much the top streamers get trolled, we pulled together data over the last twelve months that focused on negative conversations and sentiment towards the top channels on the platform.

The most trolled channels on Twitch

If you’re in the public eye, criticism and disagreements are unavoidable. But thanks to the anonymity of the internet, trolling can happen at any time, especially when you’re live. With that in mind, here are the top 5 most trolled top streamers on Twitch.

At 10.1 million followers, Spanish Twitch celebrity Ibai is the 6th most popular channel on Twitch. He’s also responsible for some of the saltiest interactions with Twitch’s trolls.

In the last 12 months, roughly 28.7% of the sentiment surrounding Ibai was negative, with him featuring in 427,975 negative conversations online. Given Ibai’s love of streaming competitive football games, it’s no surprise that he can lose his cool in the heat of the game, which is exactly the kind of attitude trolls go looking for.

Next up is the Spanish-born streamer, Elded. Famed for playing a variety of games on the side but focusing on Fortnite, Elded might only be the 27th biggest channel on Twitch, but he still boasts 5.02 million followers.

While Elded was only subjected to 1,780 negative conversations over the last year, that accounted for 27.9% of the sentiment he received, and only 9.19% of the total sentiment directed at him was positive.

The third most trolled channel on Twitch, and the 11th largest on the platform, JuanSGuarnizo managed to garner 262,667 negative conversations in the past year. That made for a total negative sentiment of 24.3%

Juan is the man if you want Grand Theft Auto and Rust focused content, but these are exactly the kind of gaming communities that Twitch trolls thrive in, adding an unwanted dose of chaos to the lives of streamers.

The 3rd most followed channel on Twitch, Spanish-Norwegian streamer, Rubius, has developed a staggering following of 11.8 million users. He also received 901,051 negative conversations in the past 12 months.

23.5% of all sentiment directed at Rubius could be considered negative, and with such a wide selection of games played, it’s not surprising trolls will try to derail his stream at any given opportunity.

TheGrefg is the 8th biggest channel on Twitch, well-known for delivering consistent Fortnite, League of Legends, and Valorant content, amassing a following of 9.82 million followers.

Of course, League of Legends is known for its toxic fanbase, and with a toxic fanbase comes more than a smattering of trolls. As a result, 18.9% of TheGrefg’s sentiments were negative focused, though salt like that is unavoidable with games such as LoL and Fortnite.

Who are the least trolled popular streamers on Twitch?

It’s clear that the most popular channels on Twitch get a lot of grief, but you might have noticed that the biggest channel wasn’t in the top five. As we’re about to point out, they barely get trolled at all.

Anyone who knows anything about CSGO probably knows just how angry and vitriolic its players can get. But despite this, ESL_CSGO, a professional esports league, gets next to no trolling.

ESL_CSGO has 5.38 million followers and is ranked 23rd in the channels, and while they featured in 23,045 negative conversations, this only accounted for 3.13% of their total sentiment.

Better known by many as the face of popular memes, LoLTyler1 is one of the most recognisable League of Legends streamers and personalities. Now, we know LoL is incredibly toxic in many ways, but apparently, this doesn’t seem to affect Tyler1

Over a 12 month period, Tyler1 only experience 4.09% negative sentiment in striking comparison to 54.3% positive vibes. That’s not half bad for the 30th biggest channel on Twitch.

If you’ve heard of Twitch streamers, chances are you’ve heard of Ninja. The biggest channel on Twitch with 18.2 million followers, and one of the most recognisable faces in esports, Ninja is the pinnacle of what many streamers aspire to be.

You’d think that being the biggest channel on Twitch would make you a prime target for trolls, but apparently not. Ninja only received 48, 599 negative sentiments in the last year, which was just 6.84% of the sentiment directed against him.

It’s clear that trolls on twitch have their favourite targets, and no matter the size of your channel, you’ll likely attract one or two to any stream.

The key thing with trolls is to just ignore them – after all, they just want a reaction. Perhaps this is something the likes of Ninja have mastered, enjoying the game and creating a wholesome community environment.

If you’re thinking about getting into gaming and streaming, then look no further than Ebuyer for all your equipment needs. From gaming rigs to microphones, and everything in between, Ebuyer is the number one place for gaming tech.

Don’t forget to check out the Ebuyer blog for more pieces like this one!