What is the best work-from-home computer? 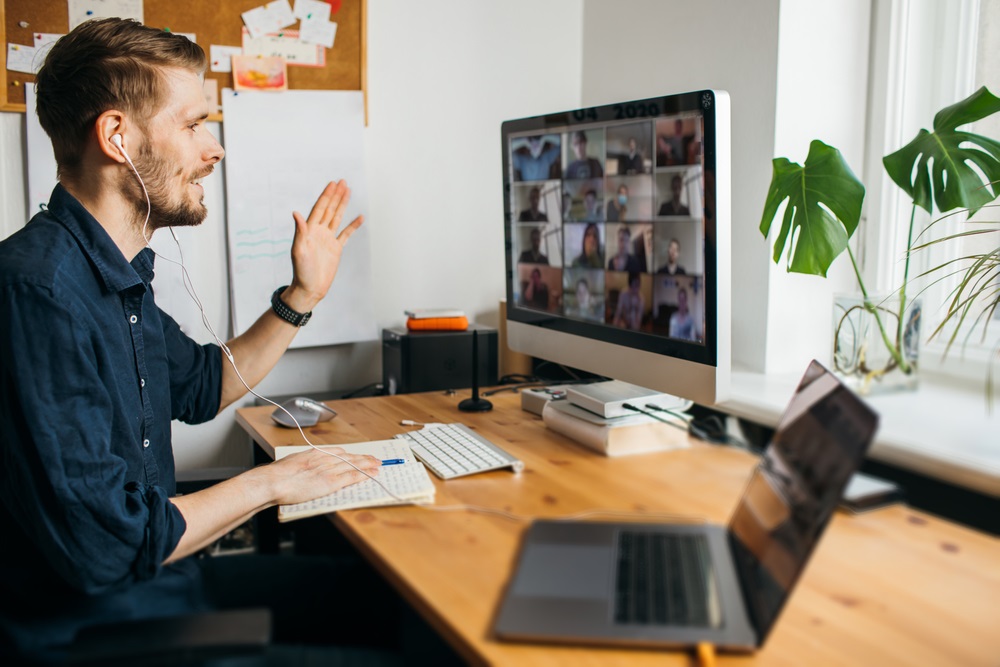 Even though the recent pandemic is now in the rear-view mirror (and hopefully staying there), plenty of people are still working from home. This makes picking a good home work computer fairly essential to get the most productivity out of your day.

But this is no easy task, as there are hundreds of different models on the market, in all sorts of different sizes and specifications. It’s easy to become confused by all the work from home computers available.

To help make this decision easier for you, we’ve put together this article to cover all the important things you should consider before spending your cash on a desktop PC for working from home.

You probably already have a figure in mind regarding your budget, and we’ll talk about that later, but the first thing to think about is which type of computer meets your needs best.

What are the types of work from home computers?

When looking for a computer set up at home, you’ll need to decide whether you want a traditional desktop PC or an all-in-one PC. There are several distinctions between the two, so let’s start with the basics.

What is a desktop PC?

A desktop PC is probably what you think of when you imagine a computer. The typical large case sits under a desk or beside a computer monitor. While this type of traditional computer is more than adequate for working from home and can act as more than just a work computer, it’s not the only option available.

What is an all-in-one computer? 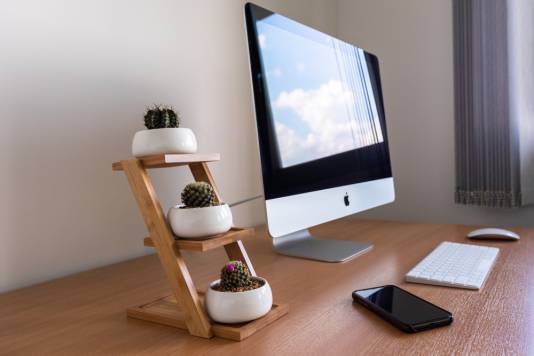 In the simplest terms, an all-in-one computer combines all the components associated with a desktop PC but in one enclosed unit, so there’s no separate monitor linked to a computer tower. The most common example of this is Apple’s iMac.

It functions in the same way as a traditional desktop computer but is much more compact, so it takes up less space and is much tidier when it sits on your desk. This makes it ideal for small offices or bedrooms.

What’s better, a desktop or an all-in-one computer?

As you would expect, there’s no clear cut answer as to which type of computer set up at home is better. Each has its own set of pros and cons, so, to give you a better picture, we’ve put together a simple list to help you decide which type is better for you.

What are the advantages of desktop PCs? 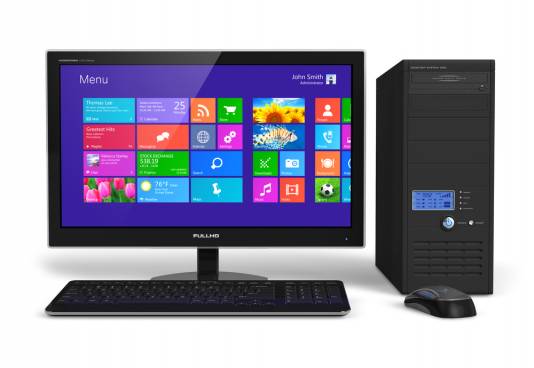 Generally speaking, desktop PCs are far more powerful than all-in-one computers. They’re also able to regulate heat consumption more efficiently, so they can run faster for longer. But that’s not to say all-in-ones are inferior or will need to be switched off to cool down.

Desktop PCs are also extensively customisable. For example, you can add a new graphics card or a more powerful processor without issue to take its power up a notch. They’re built so that you can upgrade them when you need to.

As a rule, desktops are generally cheaper than all-in-one computers due to the nature of their construction. If you already own a keyboard and mouse, then you can use the ones you already have, which will make this option even more affordable.

But to be clear, a desktop PC is the ‘tower’ part. You’ll need to buy a monitor, keyboard, and mouse to complete your setup if you don’t have them already.

And the benefits keep coming with desktop PCs. Thanks to their modular and spacious design, they’re much easier to repair. Many IT hardware components like CPU, RAM, audio, graphics cards, etc… are separate parts and can be detached for repair or replacement.

Lastly, if you’re looking for a computer set up at home which you can use for work, as well as entertainment, then desktops are a great option, especially for gaming, since they offer higher power and higher expandability to allow running of rich-graphic games.

What are the disadvantages of desktop PCs? 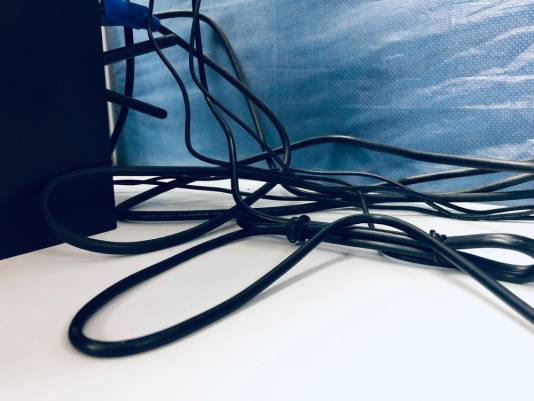 All those leads are not a pretty sight!

There are, of course, disadvantages with desktop PCs as well. First and foremost, they’re heavy to carry and not easy to move around from room to room. Ideally, they are set up and will stay in the same place, which is what was intended.

On top of this, a desktop PC takes up plenty of space on or under your desk, and there are cables needed to link-up everything: power, video, audio, etc. Desktop PCs are usually quite bulky, so make sure your desk is big enough to spread out your work documents, too.

Desktop PCs must also be plugged into a power outlet all the time to be used, as should produce noticeable noise. We’re not saying your lounge will be like living underneath the Heathrow flightpath, but all that power needs fans to keep it cool. And as we’ve mentioned, you’ll also need a separate monitor, keyboard and mouse.

What are the advantages of all-in-one computers? 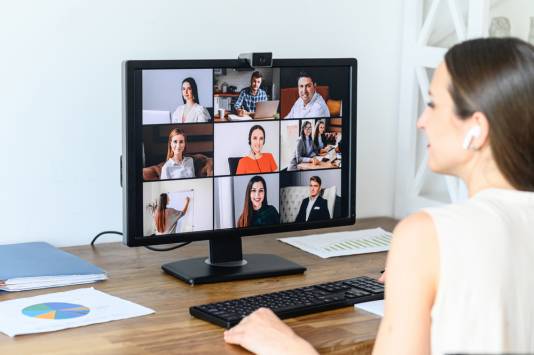 Firstly, all-in-one computers are extremely easy to set up and use, as there’s nothing to connect. The setup is as simple as placing the computer on to your desk, plugging in the cable, and switching it on. If you’re intimidated by tech, then you have nothing to be scared of with the all-in-one set-up procedure.

One of the other main advantages of an all-in-one computer is that it saves you space. You can have a nice cable-free environment, which means you’ll have more desk space and a tidier looking area to work in, which is important if your computer is set up in the living room or somewhere where it’s in view all the time.

A de-cluttered workspace means that an all-in-one desktop is a good option for many.

What are the disadvantages of all-in-one computers?

Unfortunately, all-in-one computers tend to be more expensive as they tie in every feature into a single machine. Convenience usually comes at a price when buying tech and it’s no different here.

All-in-one computers are also harder to upgrade than desktop computers. Without the option to upgrade you may experience slower performance as time passes, but it also depends on how hard you work it. Rather than upgrading, you may find yourself replacing your computer often, which is pricey.

While researching work from home computers, you might have come across mini-PCs, but what exactly are they, and are they any good?

Mini-PCs are small-sized, inexpensive, low-power desktop computers designed for basic tasks such as web browsing, accessing web-based applications, document processing, and audio/video playback. So, if you’re not using tons of memory, or want to edit videos or photos, a mini-pc could be the perfect option.

Small size doesn’t necessarily equal small power. Indeed, many mini-PCs are mini only in form factor, and they possess more than enough power to get you through your day and handle most tasks with ease.

Today’s mini-PCs can pack a lot into their tiny frames, and they certainly take up little desk space. The huge advantage they have is that you can throw one into a backpack and set it up anywhere you have a monitor, mouse, and keyboard.

What is the best computer for your home office?

Deciding on which is the best work from home computer can be tricky. While you should now understand two of your best options, you’ll also need to think about a few other areas.

Let’s get the obvious bit out of the way first. The computer you decide to buy depends on what you can afford. It’s always best to have a realistic budget in mind before you begin your search, and you should try and stick to it. But be realistic. Don’t expect to get an all-singing-and-dancing desktop PC for £200.

What sort of work will you be doing?

Every person has different tasks involved in their work. Some write others edit videos and photographs, whilst others trawl through data. So, it’s important to get a computer which is most suitable for the type of work you do.

For example, if you work editing videos, you’d be better choosing a very powerful desktop PC and buying a decent sized full HD monitor to go with it, otherwise you find your all-in-one PC lagging or overheating.

How big is your workspace?

It would be great if we all had empty spare rooms just waiting to be turned into luxurious home offices, but for most of us, that’s just a dream! Usually, space is limited, so we have to use it wisely. This is one thing we tend to forget when buying a home office computer.

For those short of space, an all-in-one is a good option as it doesn’t have a large tower, not to mention all the cables, plugs, and possible extension leads associated with desktops.

Many people have no choice but to have their computers set up on the dinner table. If this is you, then an all-in-one is very convenient as you can easily move it when you need to make room.

If you’re considering a desktop computer, you need to think about the area in which you’ll store the tower. Will you store it under your desk, or on top of your desk? How much room do you have?

Electrical outlets are also an important consideration before you buy your computer. For a desktop, you need to plug in the monitor and the tower. If you have limited outlets, this is something to consider if you want to avoid tripping over extension cords on the floor or using several multi-plugs to make enough outlets.

How fast do you need your computer to be?

The processor and RAM are the two most important components to look at when accessing a computer’s speed. RAM is typically measured in gigabytes (GB) or terabytes (TB) while processing speed is measured in gigahertz (GHz).

The everyday tasks that most users perform are basic, like word processing docs, researching, browsing, etc., that the lowest-end processors in newer computers should be fast enough.

However, if you’re involved in video editing, 3D animation, or gaming and streaming, then you’re going to need a much more powerful desktop to facilitate the high power requirements.

At the end of the day, it doesn’t matter how kitted-out a home office looks. Without the right computer, day-to-day work will feel like an uphill battle.

Before you choose the best computer for your home office, make sure you have a rough idea of what type you’re looking for, define a budget, and check your desk has adequate space. Keep in mind the nature of your work, and then decide if you want to buy a desktop computer, an all-in-one PC, or a mini-PC.

We’ve plenty of computers for you to choose from in the Ebuyer store, as well as computer monitors, keyboards, and mice – everything you need for an efficient computer set up at home.

Don’t forget to check out the Ebuyer blog as well for more in-depth articles like this one!