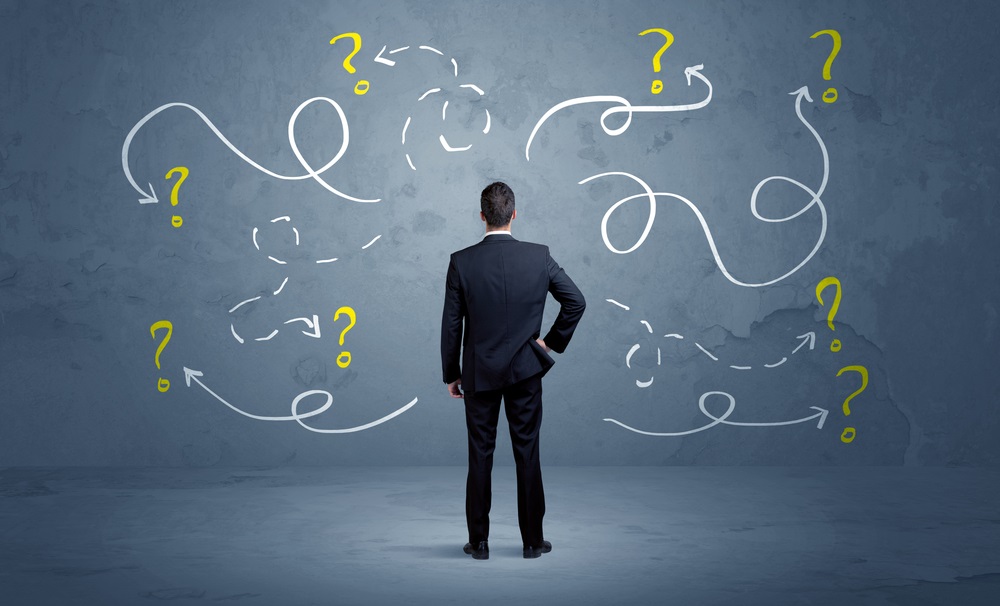 The classic desktop PC is commonplace in almost every home and office, and for good reason. They’re reliable and powerful but they also take up a substantial amount of space, which can be pretty awkward if you’ve got limited room in your home. You could get an all-in-one PC to make up for this, or you could opt for the increasingly popular mini-computer.

To help you decide whether a mini-computer is right for you, we’re going to use this blog to compare desktop PCs with mini PCs. What is a mini PC? You can probably guess that it’s smaller, of course – but is it as powerful? And how does it compare in terms of cost?

What is a Mini PC?

Mini PCs, also known as mini-computers or mid-range computers, are essentially like normal desktop computers. They possess most of the features and capabilities of desktop PCs, but they are tiny in comparison! 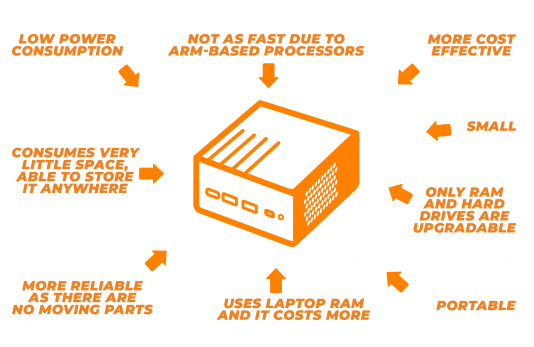 How do mini PCs work?

Like any computer, mini PCs have a central processing unit (CPU) and memory, which means a mini PC operates pretty much the same way as a ‘standard’ computer does. They generally have the same parts as a computer but there are a few differences which we’ll explain now.

The processor performs operations based on data. Mini PCs generally use ARM-based processors as they are small and energy-efficient. An ARM processor is one of a family of CPUs based on the RISC (reduced instruction set computer) architecture developed by Advanced RISC Machines (ARM).

ARM makes 32-bit and 64-bit RISC multi-core processors designed to perform a smaller number of types of computer instructions so that they can operate at a higher speed, performing millions of instructions per second (MIPS). 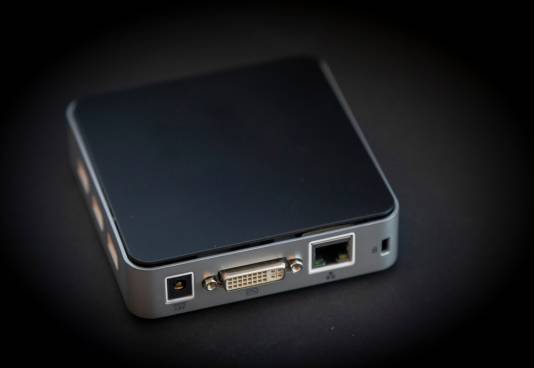 Your computer memory stores data. There are two types of memory, read-only memory (ROM) and Random-access memory (RAM). ROM cannot be altered, while RAM can be repurposed.

All computers need some form of memory to help them operate at peak performance.

Mini PCs typically use Flash memory to hold information, allowing them to stay small and compact.

Computer ports allow for the connection of other devices such as a monitor, keyboards, etc… Depending on the model of the mini PC, it may also have USB or HDMI, RCA-video out, and even an audio jack!

What’s not included in a mini PC?

OK, so we’ve told you what’s inside a mini PC, but what is not included? As you might have guessed, a mini PC’s size means it can’t fit every traditional component inside its case.

All computers need a good cooling system. Unfortunately, a mini-computer’s size prevents sit from mounting normal fans. This may become an issue at some point as computing generates a lot of heat. However, if you’re concerned about that aspect, you can always add an additional fan to your mini PC for peace of mind.

The real-time clock (RTC) is a timekeeping device which keeps going after you’ve shut down your computer and gone away to do something else. However, the RTC relies on power from a battery, but mini PCs don’t have a battery, hence they have no RTC.

Naturally, with a mini-computer, there’s no display, keyboard, or mouse, and thus, this is something you’ll have to pay extra for. Some mini PCs do support Bluetooth. If not, you can always connect using the USB ports.

Are there any variants of mini PCs?

Most mini-computers are of a similar design, shape, and size. However, you can get a barebones mini PC if you so desire. A barebones mini PC is usually cheaper, but they don’t come with a hard drive and RAM – instead, they usually consist of the case, motherboard, and processor.

Barebone kits offer more flexibility and are generally popular amongst computer hobbyists who like to select their own favourite components – it all comes down to whether you want to be more hands-on or prefer to get started straight away.

Ready-to-go kits are more convenient and easier to set up, which makes them ideal for beginners. And more importantly, you don’t have to install and update your OS and drivers, which is great if you’re not familiar with tech set-up requirements.

The advantages of a mini PC

By now, you might already be thinking of a few reasons why you would purchase a mini PC over a laptop or desktop.

First is their size. This shouldn’t come as a surprise with the name ‘mini’ – because of its tiny body, it is portable, light, and can be packed away easily to save space.

Even though they may not have much onboard storage, that’s not a huge problem if you use the cloud and web service options. It’s probably true that gamers won’t have a mini PC at the top of their wish list, but for simple computing tasks, they are a good fit for many people who need to do basic computer tasks.

And this small size also means they can be much cheaper in comparison to desktop PCs, gaming PCs, and laptops. They’re more cost-effective, which usually means they’re cheaper.

Mini PCs also offer great versatility. You’re able to change the parts inside a mini PC whenever you need to and it’s up to you which monitor you want to use with it. You can use your TV screen or a computer monitor.

Mini PCs are also known for their low energy consumption. This might not sway your decision when buying, but it’s satisfying to know that you’re doing your bit to save the planet whilst also saving you a little on your electric bills.

A mini PC uses less power and so needs less cooling. This means that many mini PCs don’t need or have a fan. Some models don’t use an optical disc drive and use a solid-state drive, which means that they are virtually silent.

What are the disadvantages of a mini PC?

The trade-off of a mini PC’s size is that the hardware specifications and processing power of a mini PC are usually reduced, which means that running complex apps and intensive workloads are not always as effective as they would be on desktops.

On top of this, one of the first things you’ll notice is that mini PCs have either very limited or zero scope for upgrading. Everything is fixed on the motherboard permanently, hence, there is not much space or slots available to make upgrades.

And unsurprisingly, mini PCs have no graphics card. Due to their small size, there’s not much room for controlling the computer’s heat and, therefore, many of the mini PCs come with integrated graphics instead of a dedicated one.

Lastly, while a mini PC is portable, you still need all the peripherals associated with them to use them, increasing the costs and things to carry when compared to a standard laptop.

How do I decide which mini PC to buy?

As with any computer, your needs will determine your choice of CPU. Are you a user who wants to use your mini PC for light tasks like emails and browsing the internet or are you a heavy user who needs a lot of power for video editing and graphics work?

If you’re a light user, it’s best to stick to the basic mobile-grade chips (eg. Intel Atoms) or desktop core i3. If you have a more demanding workload, then a desktop core i5 and above is required! The CPU will usually determine how expensive your mini PC is going to be.

Are mini PCs any good?

Whether or not a mini PC is any good will depend on your needs. For home, work, and education, almost all of the mini PCs on the market right now are good enough to perform basic tasks such as browsing social media, answering emails, and attending online lessons.

If you’re a regular gamer, you shouldn’t need to spend a fortune on buying a gaming laptop or gaming PC. You can purchase a mini PC and then upgrade the parts as required!

As for the specs, we recommend at least 4 GB for a graphics card that will deliver 30-40 fps which will prevent constant lagging. For the CPU, an i5 will be fine. When it comes to RAM, 16 GB will be sufficient, and you can always go for a 250GB HDD.

However, if you’re a dedicated gamer that wants to play the latest triple-A games at high settings, a mini PC is not for you. For that, you’ll need a dedicated gaming rig.

Mini PCs are a much more attractive proposition today than they used to be. While a desktop PC will give you plenty of power and can be upgraded, they’ll take up more space. A mini PC is not as powerful and generally can’t be upgraded, but they are ultra-portable, and are just the job for those everyday tasks. The decision is yours!

Browse our ranges of powerful desktops and mini PCs here.

If you’re ready to buy your first mini PC or upgrade an existing one, you can find everything you need right here in the Ebuyer store. From increased RAM to external hard drives, you can buy exactly what you need.

And don’t forget, we’ve got plenty more articles like this one that you can read over on the Ebuyer blog.