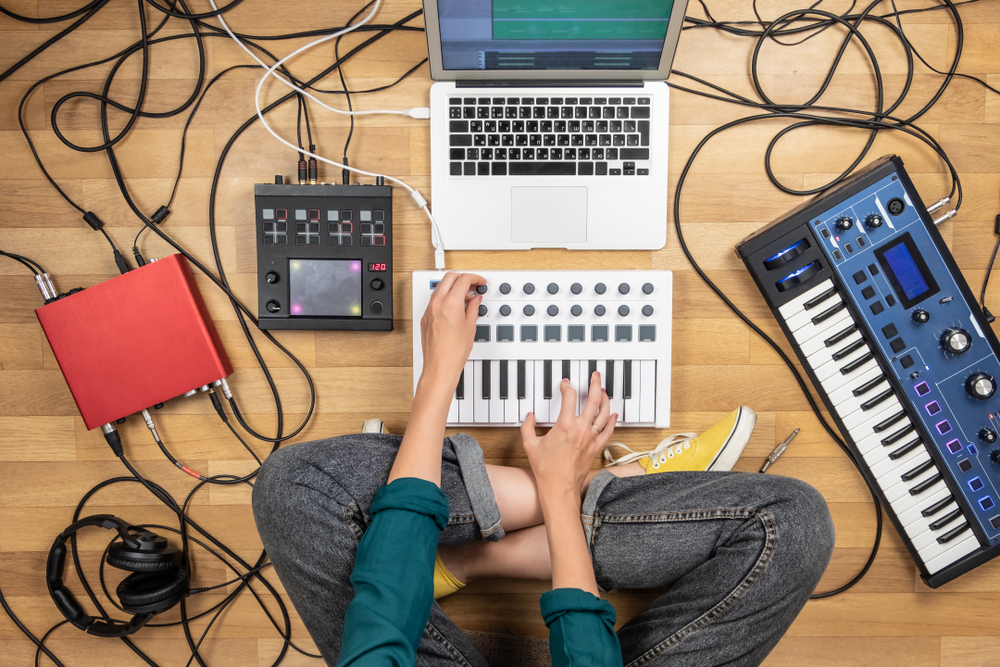 Whatever area of the media you find yourself working (or playing) in, there is an endless amount of tech to choose from. Firstly, let’s take a look at what tech you might need for music production…

Are you likely to be recording, producing, composing, or performing? Well, if you intend to do any of those, you’ll probably know that musicians use laptops in lots of different ways. Many go for a traditional approach, recording tracks from microphones and instruments, then mixing them to create the final product.

Hip-hop, pop and EDM musicians typically use the laptop itself to produce most of the actual sounds – programming the sounds into a sequencer or playing them on a MIDI keyboard or touchpads connected to the laptop. But, even after all that, vocals (and one or two other sounds) are still recorded in the traditional way using microphones.

Then the whole lot is often mixed together with computer-generated audio and often using small clips of other artists’ recordings. DJs are renowned for doing this and also use the laptop as a performance device, often triggering everything with a controller that has touchpads and a couple of turntable-style discs for scratching.

All of these applications use software packages known as digital audio workstations, or DAWs. Some DAWs are targeted more at recording, others more at generating music in the laptop itself. To do all this your laptop or desktop will need power, so don’t bother will anything less than 64GB.

The screen is important because it determines the size of your visual workspace for video work or music production. The more complex your productions, the more workspace you’ll need. Almost any laptop screen will let you monitor 6 to 10 tracks of music comfortably, but managing 30 tracks is pretty impossible on a screen under 14 inches, so make sure you go for something bigger.

Midsized laptops (14–16”) generally represent a balance between portability and performance. Large laptops (17-18”) are great for those who need to monitor dozens of tracks at once, which is the norm with certain styles of music such as hip-hop.

If you’re planning to use your laptop for live recording or performing, a smaller model is usually a better choice because it’s easier to carry and takes up less space on stage. Another consideration is battery life. This might not be important in homes or clubs where there’s an outlet nearby – which is usually the case, but battery life might be vital for mobile recording.

Also, if you’re planning to use your laptop for a performance or to record in clubs, it’s a good idea to choose a model with a backlit keyboard.

MacBooks are fast and reliable, yet there are some equally powerful Windows laptops, typically at more affordable prices. This choice depends mainly on two factors: your budget and which software you prefer to use. Note that professional music studios tend to use Macs, so if you plan to work in conjunction with pro studios—recording a few tracks in a large room, perhaps, or hiring a pro to mix or master your recording—a Mac might be a better choice, although audio files from Windows machines can be transferred to Mac OS and vice-versa.

Music production can put a heavy load on a CPU, or processor, which is the heart of any computer. Get the best, most capable processor within your budget because it’s rarely possible to upgrade it later. The more complicated your productions, the more the CPU matters. Mixing a tune with 30 tracks, multiple sampled instruments, and lots of digital audio effects demands a powerful computer.

There are two measures of processor performance to keep in mind. One is the number of cores. Each core can process data independently, so adding cores dramatically increases processing power. A quad-core processor is the best choice for music production. The other measure is clock speed, which typically runs from about 2.4 to 4.2 GHz. The faster the better.

Typically, a more compact laptop will have a less-powerful processor, but that’s not always true.

RAM (or Random Access Memory), stores programs and data temporarily when your computer is on. The more complex the program, the more RAM it requires. For music production, you need at least 8 GB and preferably 16 GB of RAM, especially if you’re working with a lot of recorded tracks and/or virtual instruments, or applying multiple effects to your tracks.

Luckily, RAM is one of the more upgradeable components of a computer, but every laptop has its limits. It’s best to choose one that can accommodate at least 16 GB of RAM.

Audio files take up a lot of storage space: Just one complicated tune can easily fill 1 GB. This is why it’s a good idea to have at least 1TB of available storage.

How that storage is arranged is a different issue. Your options are a conventional hard drive (HDD) that relies on one or more internal spinning discs, a solid-state drive (SSD) with no moving parts, or an external HDD, which connects to your laptop through USB.

An SSD can read and write data much faster than an HDD and it’s quieter and more reliable. However, an SSD is typically about five times as costly per GB as an HDD. One solution, if your laptop permits it, is to have a 128 or 256 GB SSD plus a 1TB HDD. This way, boot-up and loading of programs from the SSD are ultra-fast, and you have plenty of storage for music files on the HDD.

Another solution is to keep your music files—or at least your archived ones—on an external HDD. This method is more complex, but it lets you add more storage when you need it, and it does let you opt for a smaller, slimmer computer.

To interface a laptop with microphones, instruments, and other audio gear, you’ll need an audio interface, which will connect to the laptop through a USB port. If you’re producing music directly on the laptop, you’ll also use USB to connect a keyboard, MIDI pads (for tapping out rhythms), and DJ controllers. Many music pros like to use control surfaces, which provide a physical interface much like a mixing board, instead of controlling their recording and audio mixing using a mouse.

Laptops come with at least two USB ports, but obviously you may want more, especially if you want to connect peripherals such as a wired keyboard or mouse, or an external hard drive. Any computer’s USB ports can be augmented by connecting a USB hub, but for portable users, that will be one more piece of gear to carry.

Surprisingly, these features don’t matter much in a laptop used for music production. The speakers built into laptops are usually fairly low-quality devices which are only there for situations where you have nothing else to listen through. Nothing will sound good through them, and if you try to tailor your mixes to sound good through them, the music will probably sound strange when played on good speakers.

Fortunately, most audio interfaces have headphone jacks as well as connections that allow you to hook up a set of high-quality powered monitor speakers that will let you do great-sounding mixes. Because isn’t it a little crazy to invest hours in choosing the right laptop, and hundreds of hours in producing a piece of music, only to listen to it through poor-quality speakers?

Once you’ve chosen the laptop, audio interface, and the DAW software best for your needs, you’ll be ready to create studio-quality music productions. In fact, a lot of the music you hear on the radio is created using nothing more. All you need to add is your own creativity and imagination.

You’ll need one of the best video editing laptops to work with raw HD or 4K video or to create special effects. While you can trim small clips with a cheap laptop, they won’t boast a fast processor, strong discrete graphics or a high-resolution display.

A good gaming laptop will probably be fine for video editing, but if you want perfect renders every time, then it’s wise to go for a media creation system.

What are the best video editing laptops?

If you’ve got a decent budget and looking for something really good, then the Dell XPS 15 or the 16-inch MacBook Pro are hard to beat, for several reasons.  They offer gorgeous, high-res displays powered by some intense CPUs and GPUs that’ll sort out most video editing projects easily. Both mentioned are slimline and easily portable.

But if you’re not a gamer and you want to focus exclusively on video editing no matter the cost, consider picking up a workstation, like the HP ZBook Studio G7 which is one of the best workstations you can buy overall.

Let’s have a look at roughly how much GB you need for what purpose!

Considering the capabilities of 16GB vs 32GB RAM video editing, 16GB RAM is the minimum for video and 32GB RAM is ideal.

OK, that’s a look at the best laptops for media studies – video editing and music production. Of course, you’ll also need accessories such as headphones, external hard drives, microphones, and more! Check ‘em out at Ebuyer.