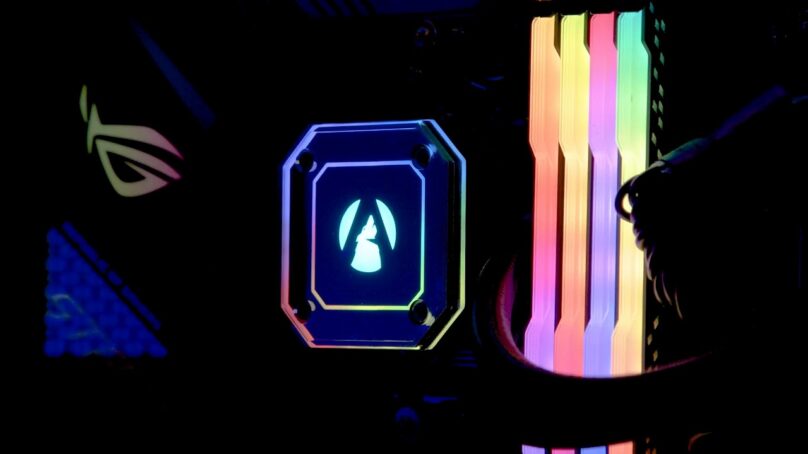 As the cheapest pre-built gaming PC in our round-up, the AlphaSync Luna Diamond is a smart option for those wanting to get into PC gaming on a budget.

It doesn’t have a discrete graphics card, bringing down the cost of a gaming PC considerably. However, the AMD Ryzen 5600G has some of the best integrated graphics of any processor on the market. It’s seven Vega-powered iGPU cores can run most of the popular, esports-focused games on the market – such as Counter Strike: Counter Offensive, League of Legends and more – at high frames-per-second and respectable graphics options.

In terms of CPU performance, it’s great too, only lagging behind the non-iGPU AMD Ryzen 5600X by about ten percent.

Later down the road, you can add in a discrete graphics card to play the latest AAA releases, spreading out the cost over time. A NVIDIA GeForce RTX 3060 would be a fantastic choice, as the gaming PC’s 550W PSU can support it.

For a well-priced and well-specced pre-built gaming PC right out of the box, the AlphaSync Canine Diamond has the components to last an entire generation of gaming. The AMD Ryzen 5600X drops the integrated graphics, but is even faster for it. It’s a hexa-core CPU with simultaneous multi-threading for a total of twelve threads, making it great for not only modern AAA game engines, but content creation and live-streaming too. 16GB of dual-channel RAM running at 3,200MHz ticks off all the boxes and extracts the maximum performance from the CPU. This pre-built gaming PC ships with both a NVMe SSD for super-fast loading screens and boot times, and a large HDD for long-term storage and back-ups.

Most importantly, the NVIDIA GeForce RTX 3060 Ti is our pick for the best mid-range GPU on the market. It has more than enough performance to drive high resolution and high refresh rate gaming monitors. Paired with NVIDIA’s ground-breaking Deep Learning Super Sampling (DLSS) technology, expect great gaming performance throughout the generation.

DLSS leverages the AI co-processors on NVIDIA RTX GPUs to smartly reconstruct games from a lower internal resolution to a higher output resolution. DLSS can take a game running at 1080p and transform it to a 1440p or even 4K image, with results imperceptible or sometimes better than native rendering. This gives you a massive boost in performance. Use the extra headroom to crank up the graphics or play at ludicrously fast frame rates.

This is no compromises gaming. Running Forza Horizon 5 in excess of a hundred frames-per-second at high graphics and 1440p, the AlphaSync Canine iCue 4000X is an absolute beast. This top-of-the-range pre-built gaming PC is decked out across the board with the latest and greatest in PC gaming hardware.

The Intel Core i7 12700KF is based on the newly released Intel 12th-gen architecture – codename Alder Lake – for undeniably the best CPU performance on the market. Combining Intel’s fastest performance cores and lower-powered efficiency cores, this CPU has a whopping total of twenty threads that’ll crush any task thrown its way.

32GB of dual-channel RAM running at 3,600MHz backs up this claim, as tasks such as video editing are quite dependant on banks of memory to operate smoothly. The SSD in this machine isn’t any ordinary drive – PCIe Gen4 drives have double the data rate of PCIe Gen3 ones and over twelve times the speed of a conventional SATA SSD. With Windows’ DirectStorage looming on the horizon, this gaming PC is future-proofed for years to come.

Of course, the NVIDIA GeForce RTX 3070 Ti is the star of the show, roughly twenty-five percent faster than the GPU in the previous machine. This gives more headroom to push up to high or even maxed-out graphics in the latest releases. As a NVIDIA RTX GPU, DLSS’s performance boost still applies. 4K gaming is on the cards with this pre-built gaming PC.

Get into PC gaming with AlphaSync pre-built gaming PCs

Exclusive to Ebuyer, you can’t buy AlphaSync anywhere else. With free next-business-day shipping and three-year warranty, get a next-level gaming PC shipped straight to your door with AlphaSync.

While we’ve previously published blogs to help first-time PC builders, we appreciate that it isn’t something everyone’s up for. Building can be a daunting prospect, from careful assembly to simply picking out the parts in the first place. That’s where AlphaSync pre-built gaming PCs come in.

AlphaSync cut out the nonsense and focuses on delivering the performance gamers demand. You won’t find misguided performance metrics or low-quality compromises on an AlphaSync gaming PC. For gamers wanting high-spec and well-built gaming PCs at highly competitive prices, AlphaSync is unmatched. Whatever your credentials – high frames-per-second esports gamer or maxed-out AAA gamer – AlphaSync has a wide range of pre-built gaming PCs for any set-up.

Landing at your door securely packaged, with a AlphaSync pre-built gaming PC, you can jump straight into the action. All you have to do is remove the protective materials inside the computer case that ensure the PC parts aren’t jostled about during transit and hook up your peripherals and accessories.

Most AlphaSync gaming PCs come pre-loaded with a Windows operating system and the latest software drivers for optimal gaming performance and stability. Let AlphaSync handle it, so you can spend more time gaming.

AlphaSync not only takes the hassle out of building a PC, but wiring up and configuring RGB lighting too. RGB lighting helps put the finishing touches on a gaming PC and takes it to the next level. Rather than a boring blank box, RGB lighting lets you stand out against the rest and truly make a gaming PC your own.

You’ll be hard pressed to find gaming hardware that doesn’t support RGB lighting. From peripherals like gaming keyboards and mice to case fans and LED strips. However, with motherboard RGB headers, RGB hubs and more, it can be tricky to sync up properly. Let AlphaSync deal with that, they’ve got the expertise, while you customise it to your preference for the ultimate gaming set-up.

The AlphaSync team are all avid gamers themselves, so they’ve got first-hand knowledge of what makes a great gaming PC. Browsing the range, you won’t find any mismatched component choices or bottlenecks. AlphaSync pre-built gaming PCs are well-balanced machines across the board.

To portray the realistic performance of any given gaming PC, AlphaSync puts them through real-world gaming scenario – no canned, synthetic, non-gaming benchmarks. Want to know how many frames-per-second one of the gaming PC achieves? Simply scroll down the product page. AlphaSync posts their results as clear as day, so you can make a more informed purchase.

Gaming is extremely taxing on hardware, placing all-important components such as the CPU and GPU under intense and sustained strain to churn out hundreds of frames-per-second. To ensure they won’t falter and throttle when pushed to the absolute limit of performance, AlphaSync uses only the best branded components in their pre-built gaming PCs.

Corsair, ASUS, MSI, Seagate and more – components from the industry’s leading brands are used throughout. From the motherboard, down to the PSU.

There are even pre-built gaming PCs with the feverishly demanded NVIDIA GeForce RTX 30 Series and AMD Radeon RX 6000 Series GPUs in-stock right now, ready for order. AlphaSync won’t scramble for components and place an annoying wait on you. Once the order’s received, you can expect a speedy delivery. Free of charge, too.

Compared to the other components of a gaming PC, the graphics card contributes the most to the indispensable frames-per-second metric. Games tend to be bound by the GPU long before the anything else, holding back even higher performance. Subsequently, while browsing the range of AlphaSync pre-built gaming PCs, the main component you should be considering is the GPU.

There are options from either GPU manufacturer – NVIDIA and AMD – for unbeatable performance. Make sure to check out our blog ‘Gaming PCs in 2022 – The specs you should be looking for’ for a break down of the other components – memory, storage and more.

Comprised of die-hard gamers, tinkerers and performance enthusiasts, the AlphaSync team has over 20 years’ worth of combined experience in the industry. Each PC builder at AlphaSync strives to beat their own high expectations as to what makes an exceptional gaming PC.

Sometimes, it isn’t always about the raw performance metrics. AlphaSync pays close detail to even the subtlest aspects of PC building, from cable management to fan orientation and ease of upgradability. This gives you a gaming PC that’s not only blisteringly fast, but looks the part too and is easy to maintain. Others might rush over these steps – AlphaSync goes the extra miles to ensure your out-of-the-box experience is the very best it can be.

Take one look at an AlphaSync pre-built gaming PC – we’ve covered some over on the Ebuyer YouTube channel – and there’s no doubt AlphaSync take immense pride in their builds.

All AlphaSync pre-built gaming PCs are assembled by hand here in the UK, loaded up with system-appropriate drivers and software – no bloat – and tested before they’re shipped off to your door. AlphaSync have devised a procedure to test each component for stability and reliability. No gaming PC leaves AlphaSync HQ under the team’s watchful eye if something pops up.

All the settings are pre-configured for optimal performance, so once you’ve unboxed your gaming PC, you’ll be in-game in no time at all. If you stumble upon an issue, you’re covered by a one-year parts and three-years labour warranty. The dedicated AlphaSync support team is here to lend a hand. They’ll get back to you as soon as they can, but always with 48hrs.