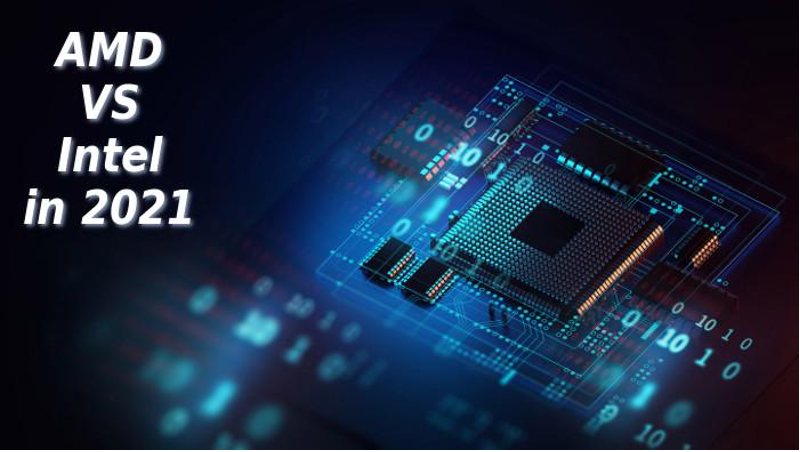 For the first time in fifteen years, AMD has taken a market share lead over Intel, at least for desktop CPUs. At the start of 2021, the future of gaming processors is balanced on a knife’s edge.

And yet, we’ll try to answer that all important question for you: If you’re buying a new PC or motherboard, should you choose an Intel or AMD CPU?

AMD vs Intel for Gaming and Performance

Recently, PC World released their retail report and benchmark summary for late 2020. And though I would love to argue with them, in this case I wouldn’t have a leg to stand on. Their conclusion matches that of Tom’s Hardware, which matches my own assessment:

The Ryzen 5000 series dominates the market right now. Core count. Overall performance. Gaming performance. If price isn’t a factor, the AMD Ryzen 9 5950X simply offers more than any Intel Core i9 can handle. Checking out the raw statistics on the manufacturer’s sites, you can see that Intel has pretty much ceded the core contest with their 10th gen chipset.

This won’t change with the upcoming release of Intel’s Rocket Lake, even with its PCIe 4.0 interface. Yes, it will be lightning fast. But the improved performance will be bottlenecked by the 14nm architecture, maxing out at eight cores and sixteen threads. This is likely a parity move, at best, given that their Alder Lake series is coming late in 2021.

Verdict: AMD dominates, and will very likely continue to dominate for at least the next two quarters.

AMD vs Intel on Availability Issues

But there’s a catch. There’s always a catch.

You simply can’t reliably buy AMD chips right now, at least not the ones that are in heavy demand. AMD CEO Lisa Su recently said that the availability issues that have prevented everyone from getting their Ryzen 5000 series chips would last for ‘several more months’.

Intel is seeing some similar issues, but nowhere near as many. So there’s an argument to be made for ‘a bird in the hand’. Does it really matter if AMD is the better chip, if you can’t actually buy an AMD CPU?

Well as we live in Europe, you might be in luck. Late January shipments of Ryzen 5 5600X, Ryzen 7 5800X, and Ryzen 9 5950X CPUs are starting to arrive. Whether or not this signals (at least) somewhat increased availability worldwide in the near future remains to be seen. Don’t expect late 2018 to early 2019 CPU availability levels for at least a couple of quarters.

Price for Performance Comparison of AMD vs Intel

The two chips to look at for similar performance at sub £400 pricing are the AMD Ryzen 5 5600X and the Intel Core i7 10700. Because as it turns out, AMD’s six cores on PCIe 4.0 benchmark almost exactly the same as Intel’s eight cores on PCIe 3.0. Who’d have thought?

With these two chips having largely comparable performance for gaming and most desktop applications, we just need to compare the price: The Ryzen 5 5600X is around £300, the Core i7 10700 is about £375. Game, set, and match to AMD, right?

On the non-budget side, yes. But if you’re looking for budget PC’s, there is a nice little niche that Intel has sewn up: The Core i5-10600k. Assuming you already have an appropriate cooler for it, this might be the best sub £300 option, barely edging out the Ryzen 5 3600s (which have a bundled cooler). And there should be no availability issues, of course.

Future proofing? This section can be summed up with a sad phrase: Don’t hold your breath.

On the Intel side, the 10nm Alder Lake CPU coming out later this year is a brand new form factor, requiring all new motherboards. If you have a newer Intel motherboard, it will likely support the upcoming Rocket Lake S, but don’t expect anything more out of it.

AMD’s promise to support the AM4 socket through 2020 was kept, but Zen 3 is likely the end of the line for this form factor. If you’re running a Ryzen 5000 series, count your blessings because that’s probably going to last you for a while. In fact, unless you want to invest in a new motherboard, it’ll have to.

Why? Because of DDR5. It is an absolute monster in the world of memory architectures. We’ll see a 50% bandwidth increase over DDR4 right away, ramping up to 100% with later models. DDR5’s 256GB capacity on SDP-based modules is complete overkill for any typical PC task… and it’s the kind of overkill we all want for the next generation of architectures and games.

All of this is going to require new motherboards, of course. With both major manufacturers moving to smaller die templates on their CPUs, this is the break point they’re going to use to implement this new tech.

So consider the current generation of both AMD and Intel to be at dead ends by mid 2021. You’re going to need a new motherboard after this. Keep that in mind when making your upgrade decisions, and plan long term.

If manufacturing and shipping get back to normal, Q4 2021 might be the last-gen upgrade sweet spot. With new chip architectures from both Intel and AMD, and new premium motherboards to match, last-gen prices might drop to some very nice points. But those points will have no upgrade path, be warned.

There’s a reason that AMD is starting to win the war for the first time in fifteen years. They made the right moves in adopting PCIe 4.0 early, and the last couple of years really paid off as Intel stagnated on their core counts. It was a double windfall.

But availability issues are stopping them from taking a commanding lead. And the announcements of end-of-life architectures from both Intel and AMD are likely to freeze a lot of consumers, who might just ride out their old hardware until Q4 2021 and see what happens.

Right now, it’s hard to recommend anything other than Ryzen 5000 CPUs if you can get your hands on them. But by the time manufacturing and shipping issues have been solved, some new, attractive chips and boards might very well be on the market.

All the new changes in Warzone’s January 2021 patch