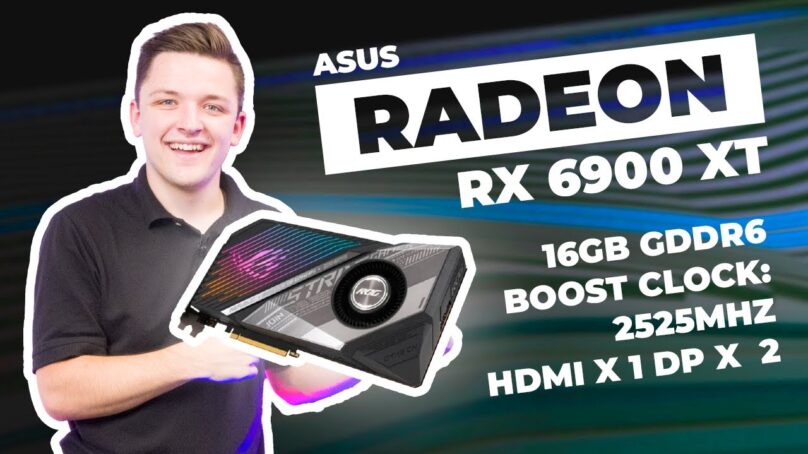 With an air cooler, the RX 6900 XT is an immensely powerful graphics card, but is the ‘no-frills’ cooling solution holding back any untapped performance? To conclusively answer this question, here’s the water-cooled ASUS ROG Strix RX 6900 XT. One of the most all-out graphics cards we’ve witnessed both here on the Ebuyer Gaming Hub and over on the Ebuyer YouTube Channel (get subscribed, by the way!).

Built on AMD’s latest generation RDNA2 architecture – aptly nicknamed ‘BIG NAVI’ among PC hardware enthusiasts due to the sheer scaled-up size of the GPU’s die compared to RDNA1 – the RX 6900 XT is the most powerful graphics card from the RX 6000 Series. It represents RDNA2 firing on all cylinders and consequently requires and ungodly amount of power and an adequate cooling solution to keep pace.

While there’s the standard fare of air-cooled RX 6900 XT graphics cards, we couldn’t stop ourselves from doubting their capacity to maintain the performance and temperatures of this unwieldy beast. After all, the ASUS ROG Strix RX 6900 XT is plugging into three 8-pin connectors from an 850W power supply unit at the bare minimum, drawing over an eye-watering 300W and even scraping so close to 350W when boost clocks are involved.

Speaking of boost clocks, this card’s are rated at an astonishing 2525MHz, the highest we’ve seen from any currently available RX 6900 XT. On AMD’s own site it’s rated ‘up to’ 2250MHz. This is the performance an all-in-one water cooler enables – a 275MHz increase to clocks speeds – not even accounting for the out-of-spec overclocking to take this card’s performance even further.

Guest presenter James describes this card as a ‘contraption’, and for first-time PC builders who’ve never laid eyes on an all-in-one water cooler, this isn’t too far off.

Let’s quickly cover the graphics card itself. At the rear there’s two DisplayPort, one HDMI and one USB-C for a quick n’ easy virtual reality set-up. A backplate reinforces the card’s weight to help prevent dreaded GPU sag and a blower-style fan draws in extra air to channel over the graphics card’s other components. That’s the identifiable portion of the graphics card, but what’s with all the tubes?

Advantages of a Water-Cooled GPU

Firstly, the combined cooling capacity of the card’s water block, radiator and the water is greater than an air cooler and secondly, you’re moving heat away from the graphics card to another part of your computer case for improved management of temperatures and air flow. Is this extra complexity worth it over an air cooler’s no-nonsense design? As we’ve already seen with the increase boost clocks the answer is: Yes! A cooler graphics card won’t thermal throttle, allowing for heightened overclocking headroom and less wildly fluctuating temperatures which should – in theory – increase the card’s lifespan too.

It’s also hugely preferable from an acoustic perspective. With the heat away from the graphics card you haven’t got to worry about applying quite as much cooling and the radiator’s included addressable RGB fans are larger (120MM opposed to 80/90MM on most graphics cards) for spinning at a lower and quieter revolutions-per-minute (RPM) while displacing the same amount of air.

Divvying out the cooling to a radiator makes the graphics card itself slimmer, rather than a hulking three-slot air cooler. It condenses it down to a more manageable two-slot form factor, ideal if you’ve got many PCI/PCIe add-in cards, such as a wireless adapter or capture card. However, you’ll need to consider the 240MM radiator. Ensure your computer case has enough room for it, as you may have an all-in-one water cooler for your CPU occupying a space already.

Let’s get the ASUS ROG Strix RX 6900 XT installed in a gaming-grade rig to demonstrate an optimal lay-out and to test it Grand Theft Auto 5, Splitgate and Apex Legends.

You may be questioning why we’re using Grand Theft Auto 5. While it’s from one of gaming’s biggest franchises and the multi-player component Grand Theft Auto Online retains a sizable player base, it’s a fairly old game and the graphics aren’t up to today’s triple-A standards.

However, the graphical pre-sets in Grand Theft Auto 5 are extremely scalable. You can outright disable some effects to align it more with the original PlayStation 3/Xbox 360 console version of the game or crank up the ‘advanced’ sliders for pristine view distances which – to this day – are intensive for even the highest-end graphics cards.

Most importantly, it has a built-in benchmarking mode for easily repeatable results, so you can compare against your rig’s current graphics card or one from our many YouTube videos!

Today, we’ll be running at a full-fat 4K (with a full list of graphical pre-sets available in the video, here…), with guest presenter James expecting around 70 to 80 frames-per-second. This would be a fantastic result, as most 4K monitors don’t go past a 60Hz refresh rate anyway – barring some expensive gaming monitors – but the real-world result is remarkedly better.

Right off the bat in one of the benchmark’s most demanding scenes, the ASUS ROG Strix RX 6900 XT hits well over 100FPS with the counter ticking up to 120-130FPS as the benchmark progresses. Despite churning out all these frames, James is just as impressed by the graphics card’s cool and quiet operation. We’ve also installed an all-in-one water cooler for the CPU to demonstrate the efficiency of a completed water-cooled rig.

Let’s switch gears to a couple fast-paced shooters – Splitgate and Apex Legends – as their dialled-back graphics will allow the ASUS ROG Strix RX 6900 XT to run at full throttle. Once again, we’re running at 4K with the highest available pre-sets if you’d like to compare. With a whole lobby’s worth of players flinging themselves through portals in Splitgate, the frame rate never dips below 300-350FPS, enough to saturate the fastest gaming monitors.

In Apex Legends, James has pulled up an in-game overlay containing a boatload of extra metrics. At 99% GPU utilisation, the ASUS ROG Strix RX 6900 XT hits its advertised clock speeds of 2525MHz, yet the current GPU temperature hovers around a shockingly low 55-60°c. It’s hardly breaking a sweat, while pumping out 140FPS! If you want a water-cooled graphics card in your rig, you should check out the ASUS ROG Strix RX 6900 XT, over at Ebuyer. Are you sorely missing a budget 1080P gaming card? Also check out the Sapphire Pulse RX 6600.